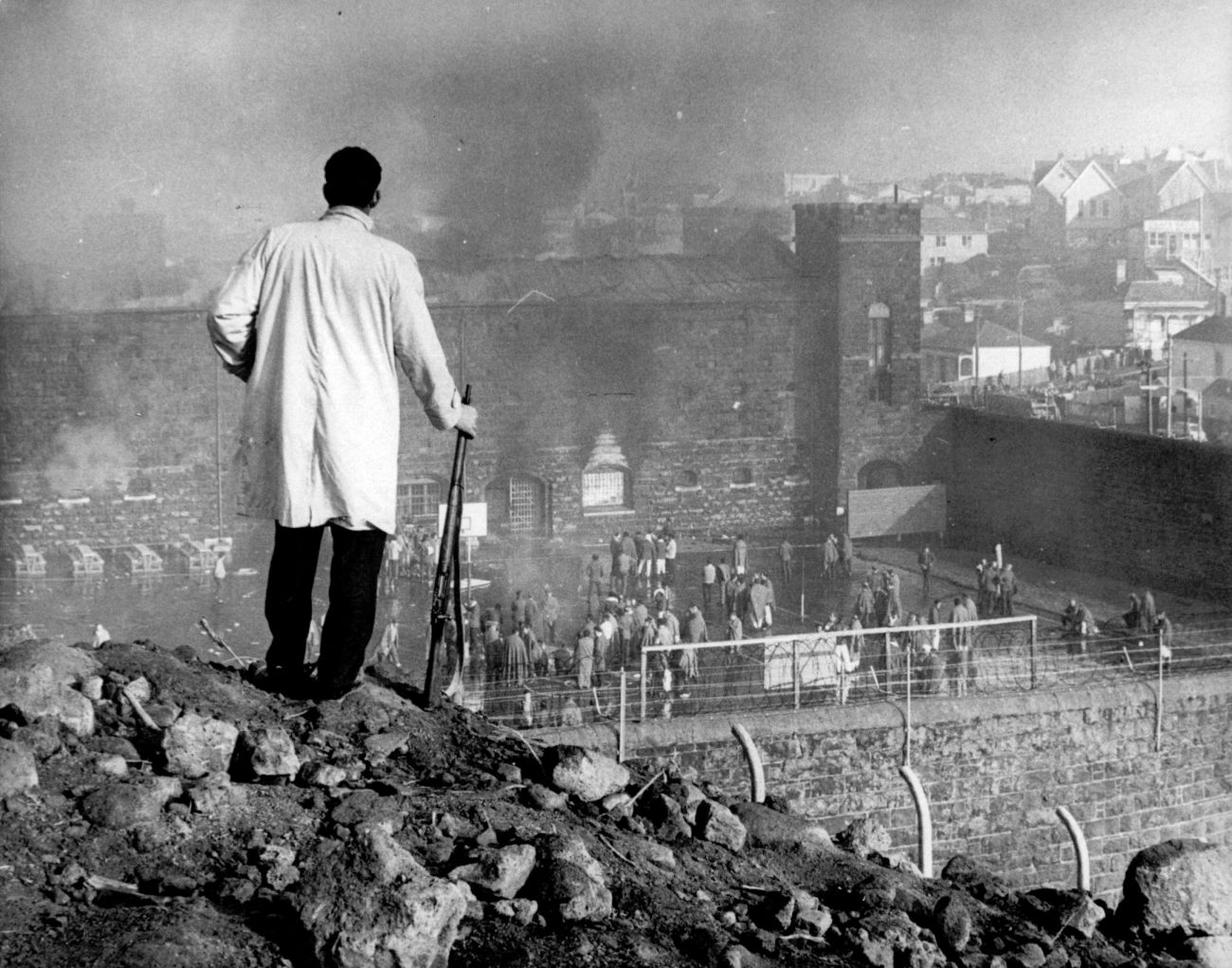 Warder Edward Marchant was partway through his patrol of the remand wing of fortress-like Mt Eden Prison in the early hours of Tuesday, July 20, 1965, when he felt the prod of a gun muzzle in his back. Marchant turned to find a masked prisoner gripping a rifle and a second wielding an iron bar. He took a swing at the gunman and a fight broke out. Marchant was knocked to the floor and one of the men ripped the telephone from the wall.

Despite being struck, Marchant managed to raise the alarm, and the prison came to life. Cell doors slammed and from all directions came the sound of men running. It was shortly after 2AM.

Having failed to break through the basement security grille to freedom, the two masked men forced their way into another wing of the prison, and with a home-made key, began setting other inmates free. The liberated prisoners appeared baffled, and it was evident there wasn’t a plan.

In frustration, an office was set ablaze, then the curtains in the prison chapel. Inmates put the match to bedding and furniture, feeding the flames with oil, kerosene and their own belongings. Several shots rang out.

Meanwhile, news of the riot had got out. Some 120 army gunners and Special Air Service soldiers were despatched from Papakura Camp to join armed police in forming a cordon around the prison. At the time, it was the largest deployment of armed soldiers for a civil emergency in the country’s history. Inside the forbidding basalt walls, 293 prisoners were on the loose—some having been freed by guards as the fire spread.

As the day wore on, firefighters battled to subdue the flames, becoming targets for bricks, crates, timber and other objects hurled by the inmates. It was an impossible task. Amid clouds of choking smoke, the roofs eventually collapsed, leaving the prison all but uninhabitable. By evening, more than 70 prisoners had surrendered, tempted by hot army stew. The remaining inmates huddled against the chill air in the exercise yard or retreated to their smoke-filled cells as the siege continued into the night in the glare of hastily erected security lights. The next morning, the last of the prisoners surrendered, cold and hungry, 33 hours after the rebellion began. The prison itself had been reduced to a gutted shell. Basements, storerooms, the chapel, kitchen, watch house, and more than 60 cells had been destroyed in the riot, along with the prison records.

But the rebellious mood wasn’t entirely extinguished. On July 24, in Wellington, two inmates tried to set fire to Mt Crawford Prison. And the next day, a riot started during a chapel service at Paparua Prison in Christchurch, injuring six warders.

Mt Eden Prison was one of New Zealand’s oldest penal institutions and had held inmates since 1888. The country’s last execution had been carried out within its walls just eight years before the riot, and though flogging and other brutal practices had long been abandoned, prisoners were still forced to endure solitary confinement, boredom and overcrowding. It has been suggested that this, along with a recent tightening of conditions, was the trigger for the riot.

In 2013, several years after the last of its prisoners had been transferred to a new purpose-built complex nearby, a heritage architect fretted publicly about the fate of the historic prison. It did a building no good, he said, to stand uninhabited.