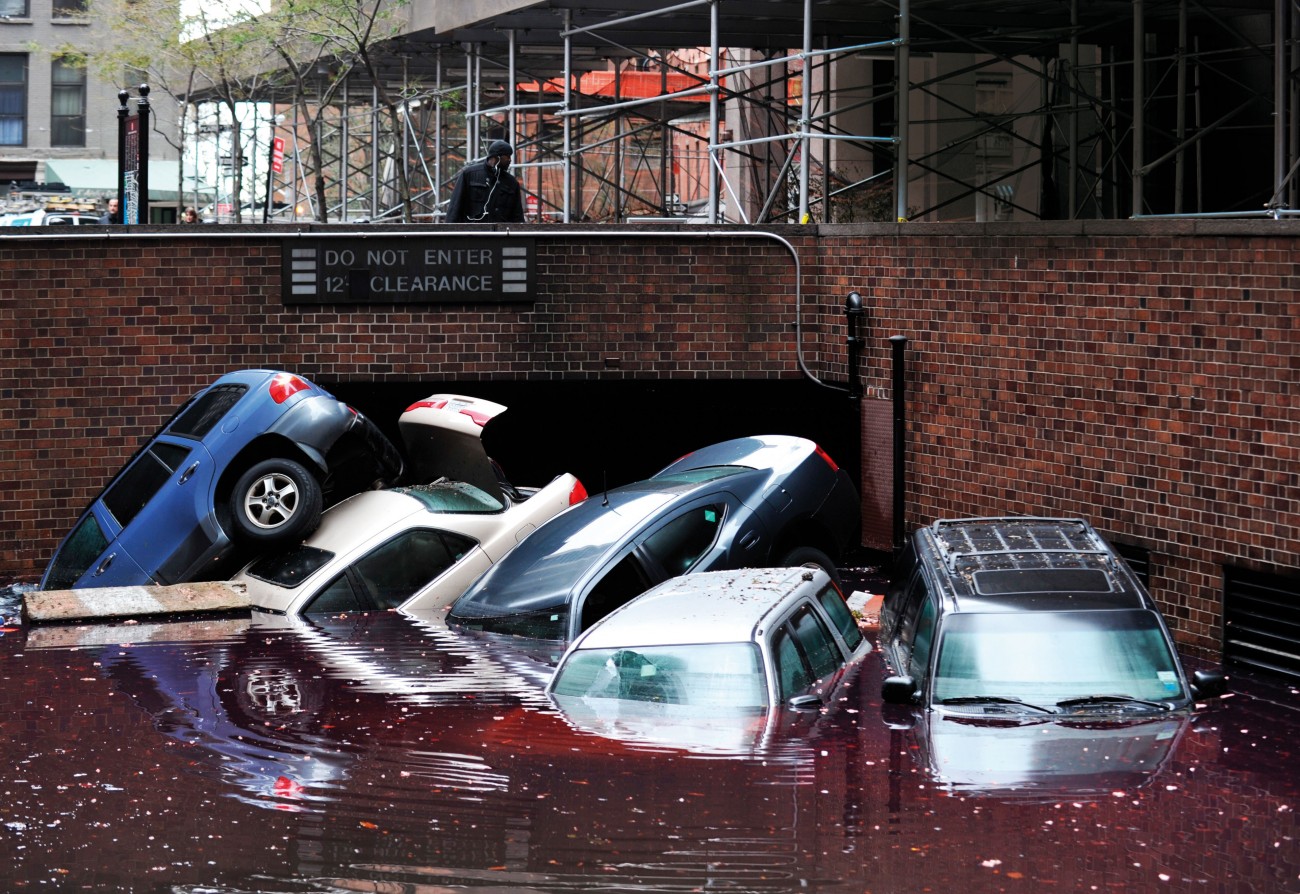 On October 29, Hurricane Sandy hit the eastern United States, causing 115 deaths and an estimated US $50 billion worth of damage, and possibly changing the outcome of the presidential election.

Days before, Sandy brought death and destruction to the Caribbean. In Haiti, where thousands were living in makeshift shelters following the earthquake of 2010, a flood swept through a shantytown, drowning 54 people. In Santiago de Cuba, the second-largest city in Cuba, 11 died and thousands were left homeless by damaging winds.

As Sandy moved north through the Bahamas, a trough approaching from the west reduced the wind speed at its core but made the system larger. Meanwhile, cold air was spilling down over the United States from the Arctic. As this swept into the western side of Sandy and spread around its core, the storm changed its structure from a tropical cyclone to an extremely deep mid-latitude low. Although only a category 1 hurricane as it began the transition, Sandy had an area of storm-force winds (a wind speed greater than 47 knots) more than 1500 kilometres in diam­eter—the largest on record for a hurricane to hit the United States.

The kinetic energy of Sandy’s winds peaked at five times the energy of the bomb dropped on Hiroshima. The pattern of the winds around the low also changed from circular to an elongated ellipse. Consequently, there was a much longer fetch of storm-force winds pointing towards the New Jersey coast. These drove the sea towards the land, contributing to an increase in sea level known as storm surge. This was further increased by the extreme low pressure, which fell to 945.5 hectopascals in Atlantic City—the lowest on record for this area. (Low pressure lifts sea level, a bit like sucking on a straw lifts liquid up the straw.) In addition, there was a full moon, which further raised the sea level.

It was becoming the perfect storm.

Bergin Point, New Jersey, experienced a storm tide 4.45 metres above normal, while at Battery Park, New York, it was 4.23 metres above normal. On top of this elevated sea level were the waves, one peaking at 9.94 metres at the mouth of New York harbour. Consequently, the sea washed into the New York subway and road tunnels, where it stayed almost a week, ruining electrical and mechanical equipment.

On the barrier islands, facing the Atlantic, the sea destroyed many of the houses closest to the beach and flowed metres deep through dwellings further inland. So much protec­tive sand was washed away that the sea now covers part of the wrecked coastal highway in North Carolina even during ordinary high tides.

Falling trees took out power lines and crushed cars and houses, killing and injuring people. In West Virginia, deep snow also brought down power lines. Power was cut to 8.5 million customers and some were without electricity for weeks.

At Breezy Point, Queens, Long Island, a house fire spread out of control in the high winds, as there was little water pressure for fire­fighters and the area was almost a metre deep in sea water. More than 80 homes burned.

Meteorologists in the United States listed four ways that global warming contributed to Sandy’s ferocity. The warmer air temperatures now occurring allow the air to contain higher levels of water vapour. This causes both heavier rain and greater release of latent heat into the air as the water vapour condenses, thereby intensifying the storm. As Sandy approached the US coast, it moved over an ocean surface about 3ºC warmer than average, which heated the air and evaporated more water into it. Further, the sea level has risen because of the combined effects of melting glaciers and ice-sheets as well as thermal expansion due to warmer ocean temperatures. Finally, the warming Arctic has changed the atmospheric circulation patterns in the northern hemi­sphere, encouraging blocking anticyclones, such as the one near Greenland that stopped Sandy following the usual path away over the Atlantic, as well as allowing Arctic air to penetrate further into mid-latitudes.

The meeting of a tropical system with a cold outbreak is not especially unusual. It was the intensity of the temperature difference between the tropical air and the cold air this time that caused meteorologists to refer to Sandy as “unprecedented”.

Storms of this type occasionally affect New Zealand, bringing us some of our worst weather. Cyclone Giselle, which sank the inter­island ferry Wahine in April 1968, was one, and the cyclone of 1936 another. The storm of February 1936 was probably the worst to affect New Zealand in the past 100 years. Every major river in the North Island came into flood, cutting road and rail links in countless places and inundating agricultural land.

The wind blew hundreds of thousands of trees down, destroyed many buildings and blew a train off the tracks south of Palm­erston North. Storm surge eroded the shore all the way down the North Island east coast. The inter-island ferry Rangatira was badly holed when she struck the Wellington south coast 10 kilometres west of the harbour mouth. She backed off the rocks, then reversed along the coast and into the harbour. When she reached the wharf, the lower forward passenger decks were awash and the propellers half out of the water, and the ship settled on the seafloor.

Most storms of this type pass well to the east of New Zealand as they leave the tropics. However, the ones that affect us tend to occur in years when neither El Niño nor La Niña influences the Pacific’s weather—as is forecast to be the situation this summer—so weather forecasters will be keeping a sharp eye on the tropical cyclones that do form.

The drama of Sandy was further height­ened by its arrival six days before a close presi­dential election. Exit polls showed President Barack Obama’s confident handling of the crisis was the most important factor for 15 per cent of voters in making up their minds, and an important factor for 26 per cent more.

Obama’s rival, Governor Mitt Romney, had earlier mocked the idea that global warming and sea-level rise were problems worthy of a president’s attention. In this respect, it seems he may have been mistaken.