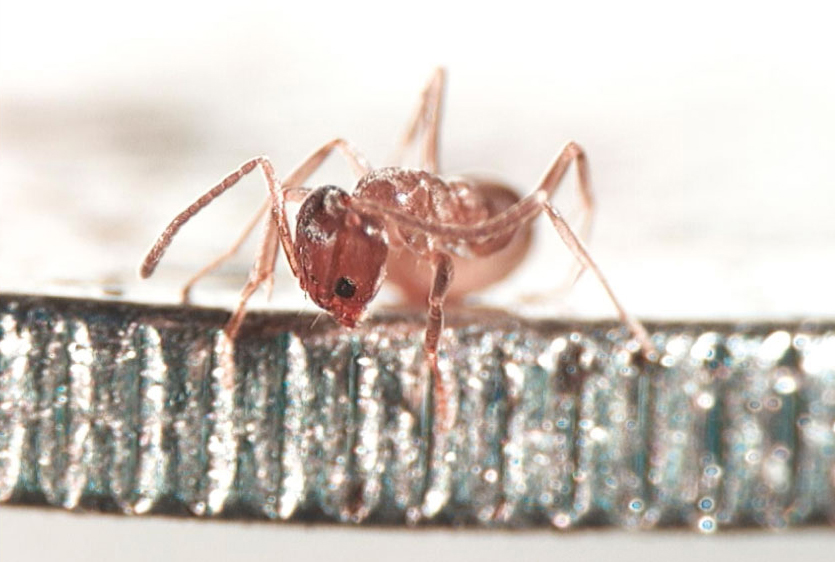 It may be small and seem like nothing more than a household nuisance, but the Argentine ant, which has recently established itself in New Zealand, has become a threat not only to the horti­cultural industry, but also to some indigenous species.

At 2–3 mm long, Linepithema humile would fit in the eye of a needle. Yet what it lacks in size it makes up for in efficiency, speed and aggression. Chris Green, technical support officer for the Department of Conservation, has been involved with the surveying and controlling of the Argentine ant in New Zealand, and believes it has the potential to affect a wide range of species. “Argentine ants are particularly proficient at finding new food sources,” he says. “They then overrun that source, excluding other fauna that would usually feed on it, such as birds, lizards, frogs and insects, and thus reduce their ability to breed and survive.”

Like most other ant species, Argentine ants eat a mix of protein-based foods, such as insects and carrion, and sweet sugary foods, such as nectar. Where the Argentine ant differs, however, is the way in which it monopolises its immediate environment, competing with almost every other kind of insect—spiders too—for food resources. Furthermore, Argentine worker ants forage 24 hours a day, so are able to find new food sources more quickly than ants that are active only during the day or night.

Argentine ants will kill other ants and many invertebrates besides, and have also been observed attacking newly hatched birds in their nests. Vivienne Van Dyk, of Flybusters-Antiants, a pest-control company, was called to the aftermath of such an attack in Auckland.

“The ants were seen to swarm over newly hatched thrush chicks in a nest in Remuera. We arrived a couple of hours after the initial phone call, and all that was left was the skeletons,” she said.“Hatchlings are particularly vulnerable while they are still wet,” says Green. “Very few of our native species have any defence against such an aggressive ant species.”

Kiwi chicks may be vulnerable to attack in certain habitats. “The ants prefer open, sunny, dry and warm habitats rather than shady, cold and wet habitats. Kiwi which forage in open areas may be at risk, but those in deep, moist forest should be safe.”

Considered one of the most invasive ant species in the world, Argentine ants were first discovered in New Zealand at Auckland’s Ericsson Stadium (or Mt Smart Stadium, as it was known then) just prior to the opening of the 1990 Commonwealth Games. Investigation by the Ministry of Agriculture and Forestry (MAF) revealed they were well established in the wider Onehunga area. However, MAF lacked effective tools to eradicate or control the colonies in such a populated region, so the ants prospered. Today, populations can be found in Northland, Waikato, Bay of Plenty, Hastings, Rotorua and Wellington. Colonies have also been reported in both Nelson and Christchurch.

Native to Argentina and Brazil, the Argentine ant has been stowing away on ships since the 1890s, when it found its way to the southern United States on board coffee vessels. Over the next century, it established founding populations on the other five continents.

It is unclear where New Zealand’s colonising ants came from, though Australia and the United States are both likely sources. What is also unclear is the type of freight in which they travelled. With more than 400,000 containers arriving at New Zealand ports every year, the possibilities are endless.

In the Argentine ant’s native land, colonies are fiercely aggressive and ter­ritorial towards each other, but on foreign soil, where many colonies tend to have arisen from the same found­ing population, they are not. Recognising their shared heritage by means of the pheromones they secrete, the ants unite to form “su­percolonies.”“Containers pose one of the greatest risks for species introduction,” says Amelia Pascoe, programme coordinator for MAF’s exotic-animal response unit. “It is very hard to inspect a container for something as small as an ant when it is packed wall to wall with goods, and it is not possible to fumigate every container on arrival. Ants can stow away in pretty much anything imaginable. We’ve found ants which had bur­rowed into a surf board, and one colony was found in the sole of someone’s shoe.”

Unlike other ant species, which have one queen per colony, the Argentine ant may have up to eight queens per 1000 workers, resulting in a constant and overwhelming reproductive cycle during the December to March breeding season. A nest can be home to anything from several tens of thousands to several hun­dreds of thousands of ants. Up to six nests per square metre have been recorded in residential areas. Should an established colony be discovered in a dwelling, the number of ants in the immediate area can easily surpass one million.Pest eradicators say that some materials used by home gardeners to control weeds, such as polythene and bark chip, can create prime nesting sites for Argentine ants. The volcanic soils of areas such as Mt Eden, in Auckland, are also favoured, as are crib-walls, which offer dry nesting.

As ant numbers swell during the summer months and a colony begins to outgrow its localised food supply, a number of queen ants leave the nest on foot, each with a band of workers in tow. Dispersion is aided by unintentional human assistance. The Argentine ant’s most effective conveyances in New Zealand have been garbage, potted plants, cars and furniture.

In a report prepared for the MAF Biosecurity Authority in 2002, Phil Lester and Chris Longson, of Victoria University, note that with an average annual temperature of over 13.5º C, almost 90 per cent of horticultural regions in the North Island are highly suitable for the growth of Argentine ant populations. The researchers note that the ants’ ability to “farm” aphids, scales, hoppers and other sap-sucking insects could result in economic losses for growers of such high-risk crops as grapes and citrus fruit.“Farm” refers to the symbiotic relationship between Argentine ants and species that produce honeydew from the sap of plants. The ants protect the sap-suckers from predators, and so gain access to their honeydew. This arrangement means aphid and scale populations can explode, with adverse consequences for the health of plants and fruit. Growers of organic produce, who rely on natural predator control, are likely to be particularly hard hit should Argentine ant populations expand in horticultural areas.

DoC, MAF and Manaaki Whenua/Landcare Research are jointly exploring ways to eradicate the Argentine ant, and have commenced trials using a variation of a bait developed by the Western Australian Department of Agriculture. The formulation is a mixture of moist sugar/protein paste and an insecticide, and has been trialled in Nelson, Mt Maunganui and on Tiritiri Matangi Island since January 2001. Early results are promising.

“We can reduce ant numbers to a very low level using a single bait treat­ment,” says Richard Harris of Landcare Research. “However, this is merely control. Even where an entire population is treated, the ants can build back up to pre-treatment levels in several years. The next step is to show that we can get the very last queen, thus eradicating entire populations.”