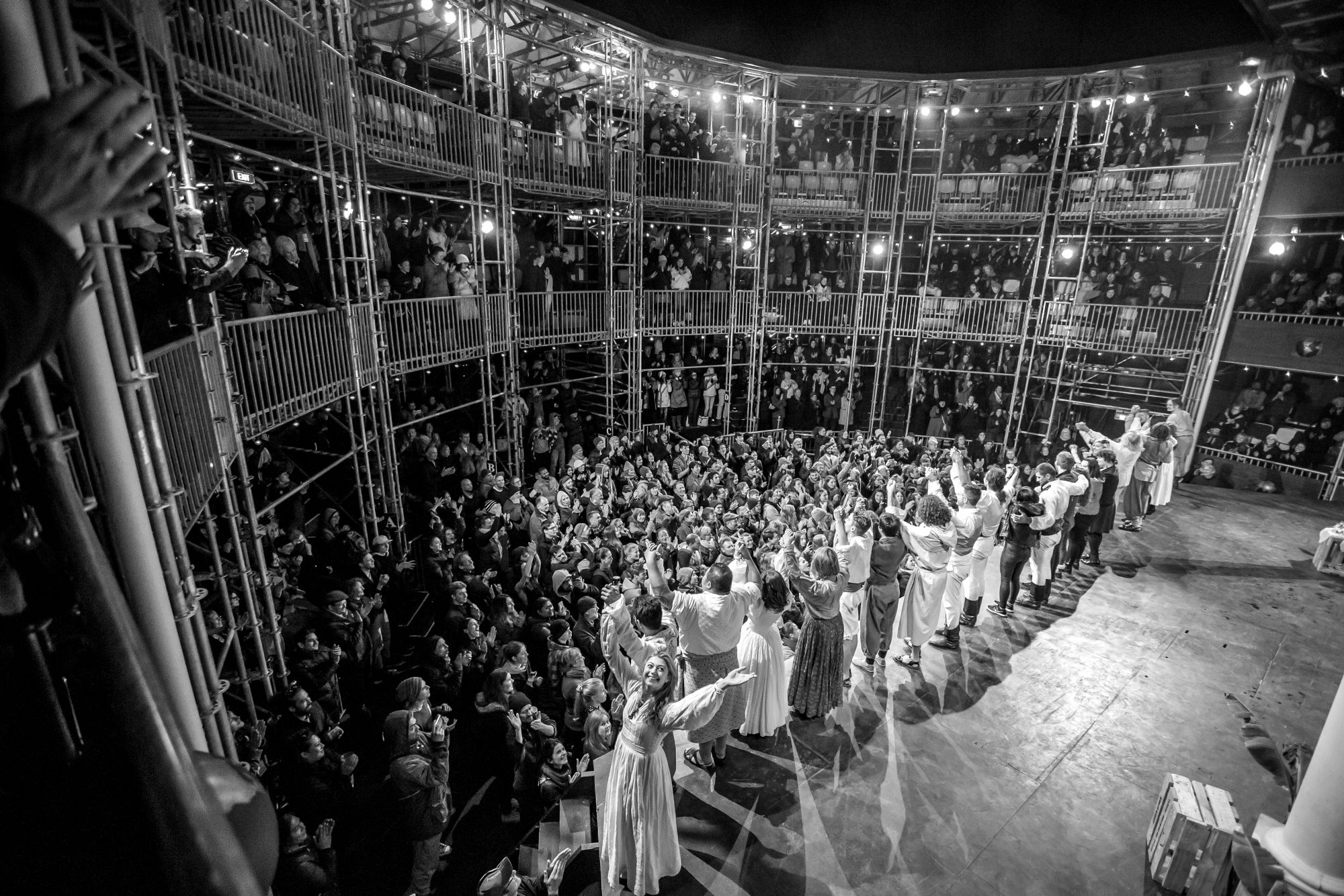 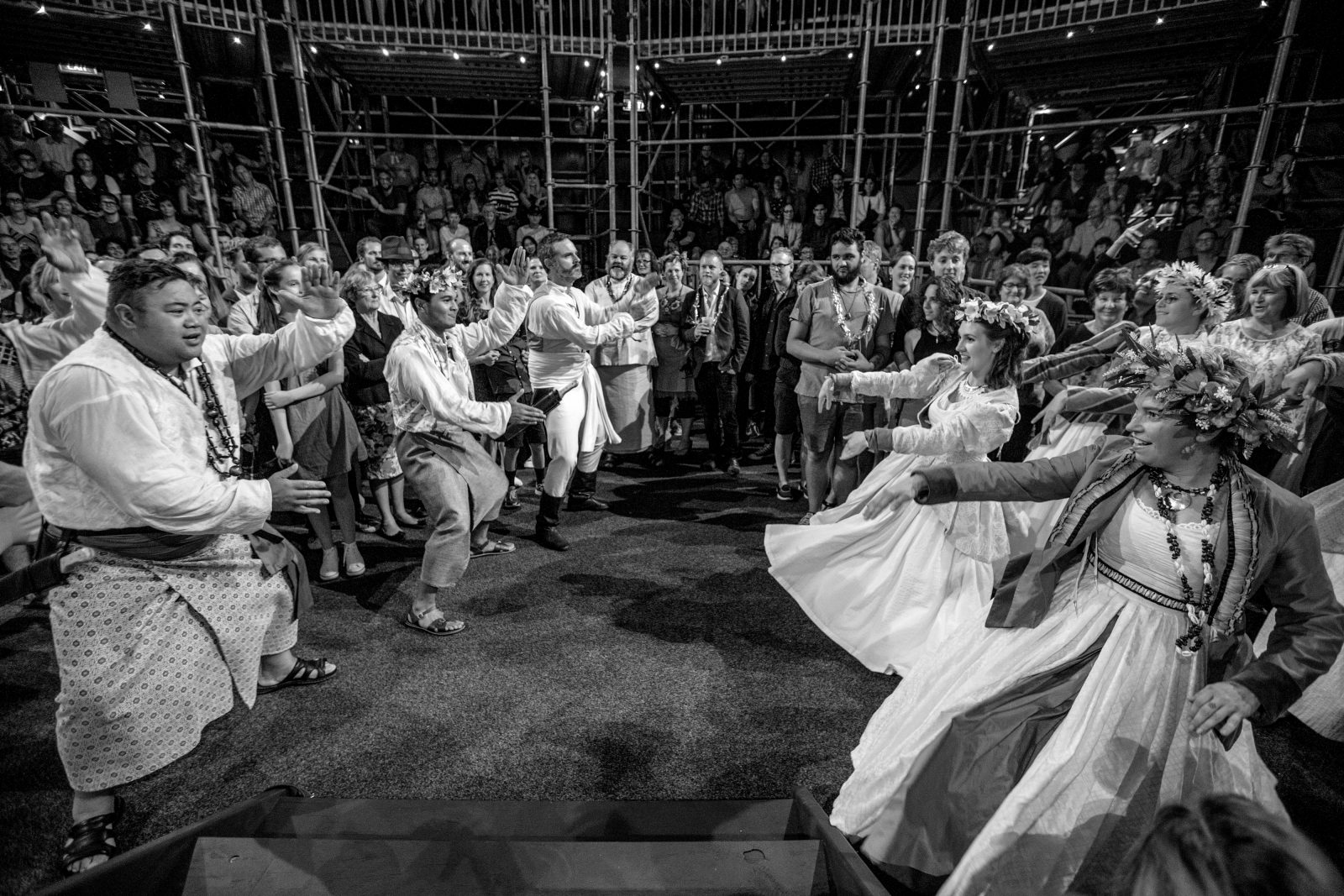 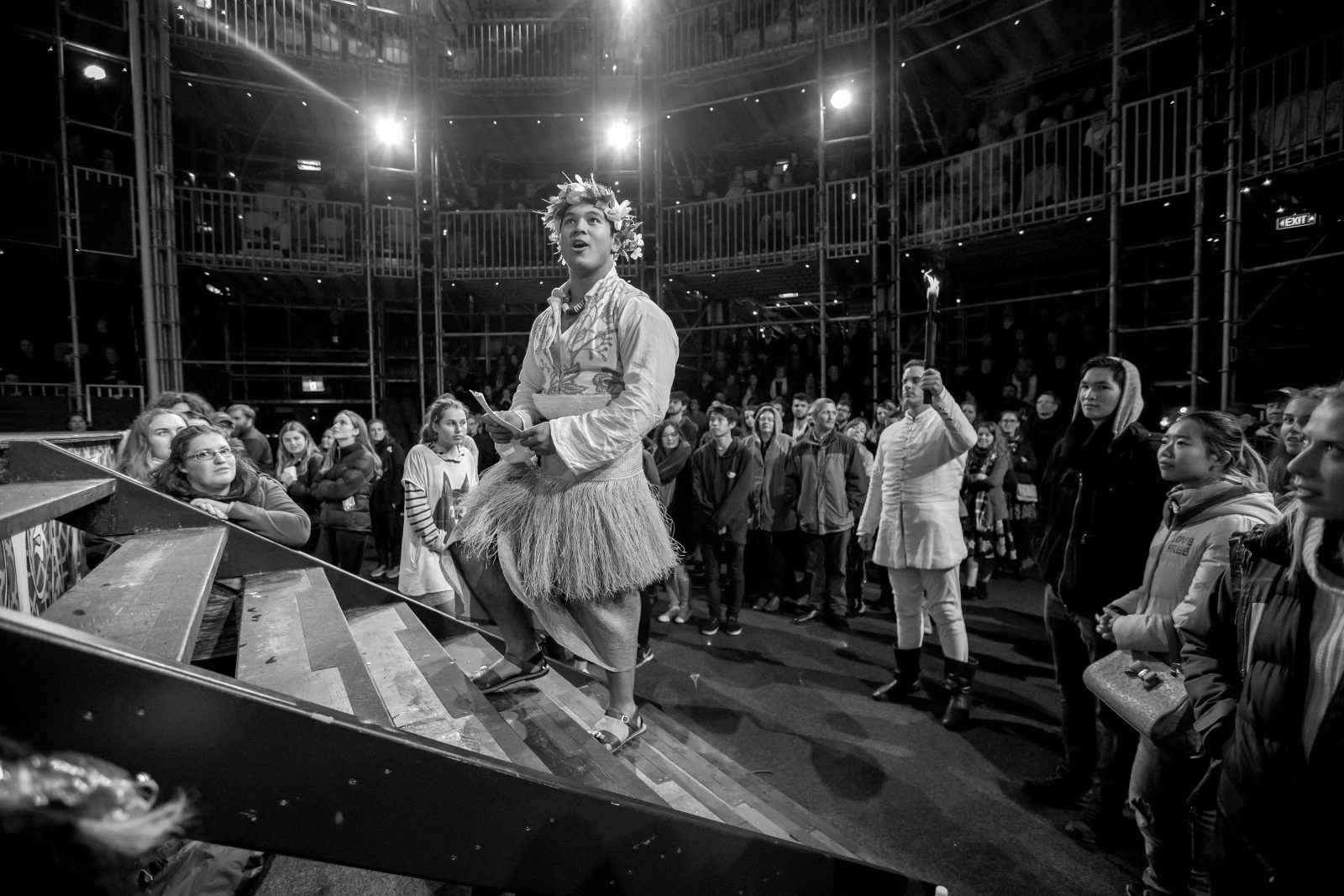 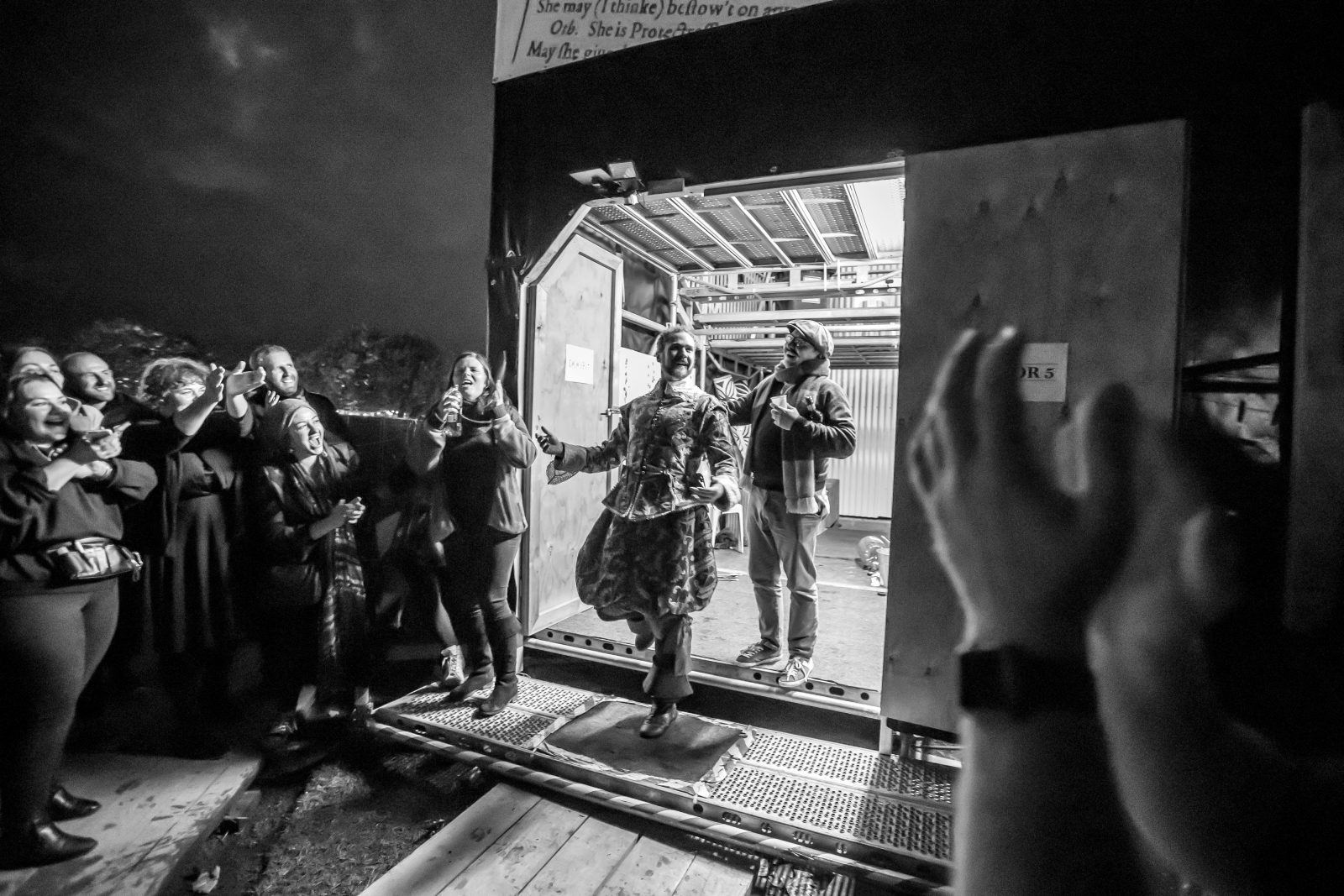 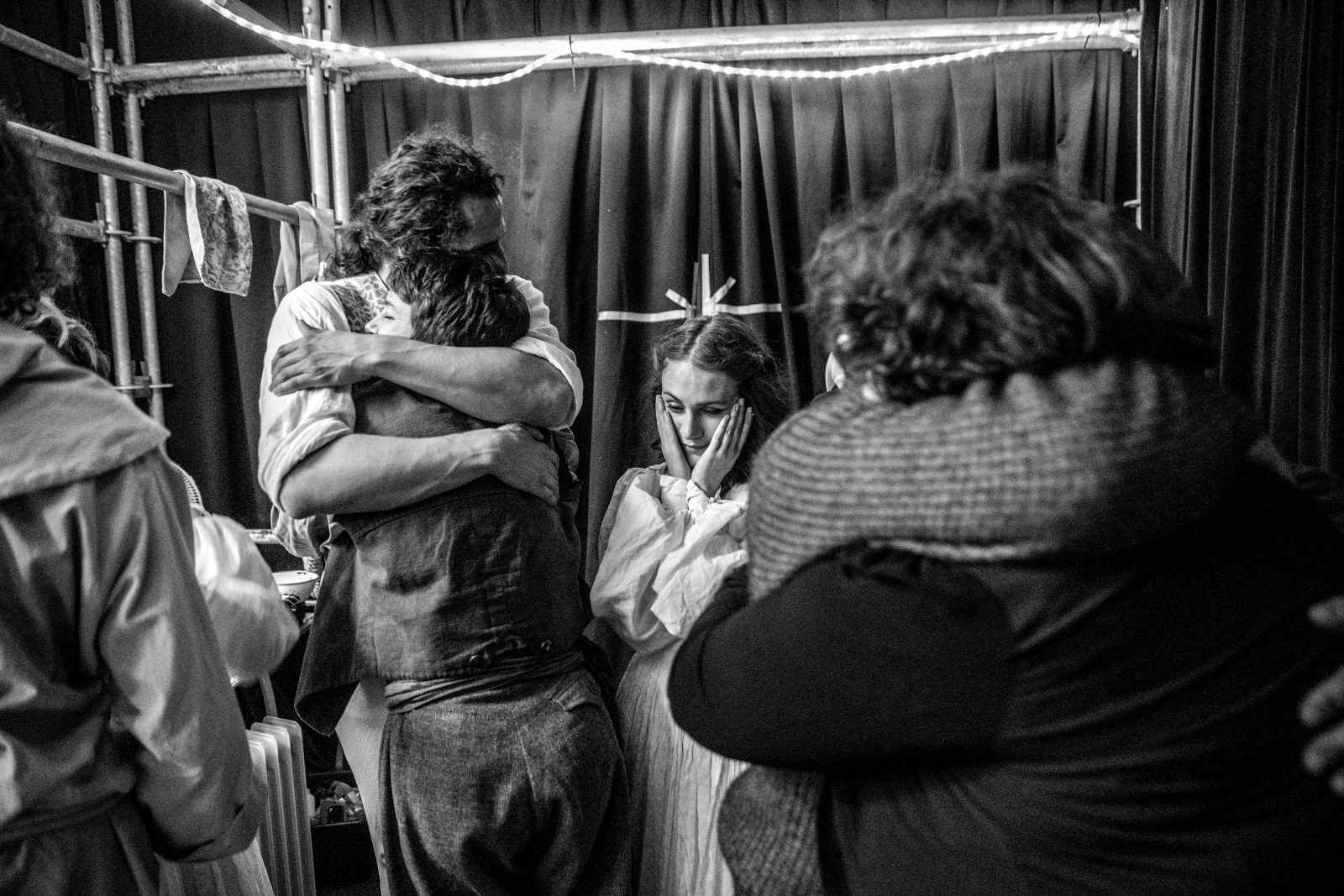 The setting was an exact replica of the second Globe Theatre, built in 1614 in Shoreditch, London, but the production of Shakespeare’s Much Ado About Nothing was deliberately and joyfully Polynesian.

The costumes were inspired by tapa cloth and Gauguin, a wedding dance drew on traditional Samoan and Hawaiian steps, leis made of lollies were presented to audience members, and one character spoke entirely in Samoan.

In February, a tower of scaffolding appeared in a garden at Ellerslie Racecourse, tucked in next to Auckland’s southern motorway. Three stories high and open to the sky, with space for 900 people to sit or stand, the dimensions of the Pop-Up Globe were within millimetres of the original, and based on recent archaeological and historical research. Construction began the same day rehearsals started, with actors and builders alike racing to be ready for opening night.

Four of Shakespeare’s plays were presented at the Pop-Up Globe, and director Miriama McDowell had a clear goal in mind for her production of the romantic comedy Much Ado About Nothing.

“The biggest thing I wanted to achieve was that brown people went to that show and realised, ‘Oh, Shakespeare isn’t just about white people in England 400 years ago, it actually relates to me’.”

“When we’d come out on stage as those characters we would see Māori in the audience sort of lift their spines and really connect with us—there was something really magical about that.”

McDowell wanted to channel that magic for her first major directing role. Much Ado About Nothing is set in Sicily, so she switched the Mediterranean for the Pacific.

“I knew from the start that it would work, because Shakespeare is written around ritual, and there are so many wonderful rituals within Pasifika culture.

“After the show one of the actors’ parents came in and asked, ‘How did Shakespeare know about the Pacific Islands?’ They totally bought the premise.”

A team of 21 costumiers made 500 outfits for the four plays. For Much Ado About Nothing, McDowell worked with the head of wardrobe, Chantelle Gerard, to design clothes that blended Renaissance silhouettes with the textures of the islands—shells, feathers and tapa cloth—and channelled the bright colours of Paul Gauguin’s Tahitian paintings.

“I really wanted to get men in skirts,” says McDowell. “I wanted some of them to wear the ie faitaga [the formal Samoan lavalava]—and not just the brown ones—so that was quite fun at the start, looking at the actors and going, ‘Who can pull that off?’ There was one guy who was Scottish, I thought he would be fine.” 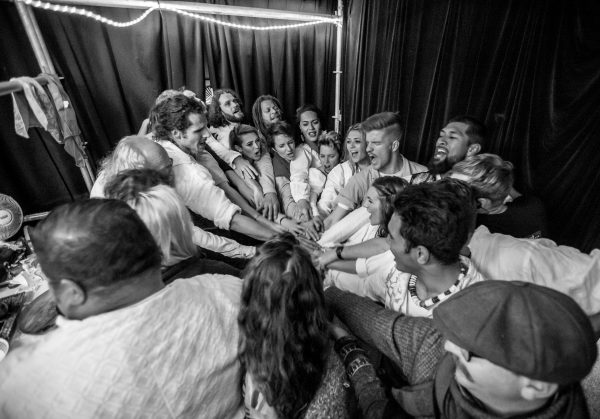 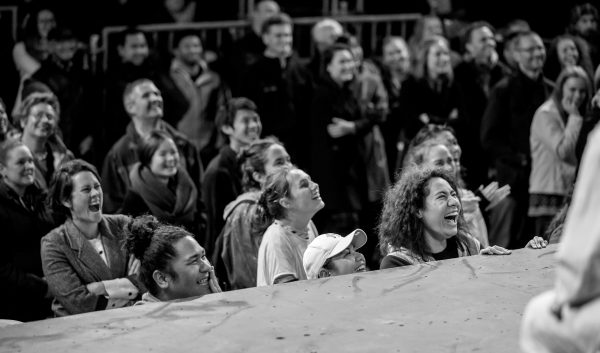 The actors stuck to Shakespeare’s script, but tweaks to accent and delivery made the 400-year-old lines resonate for a New Zealand audience. Every time the word ‘yea’ appeared—and Shakespeare uses it a lot—the cast decided to give it a Kiwi inflection and pronounce it ‘yeah’ instead of the traditional ‘yay’.

“It completely changed the sound of the show,” says McDowell. “When you can get the audience to laugh, and give them a wink as you’re delivering the lines, but still be absolutely true to the text and the rhythm, that’s when you’re nailing it.”

Semu Filipo, of Samoan and Tokelauan descent, owned the stage as comic lead Benedick, courting his rival-turned-love-interest Beatrice with stinging insults, flirting with women in the front row, scoffing bananas (he put away 608 of them over the course of the season) and encouraging the audience to sing backing vocals to his solo.

“As an actor in New Zealand you don’t get many opportunities to do the great classics, to perform for huge audiences, to play to all of your skills,” says McDowell. “So the Pop-Up Globe was made for an actor like Semu, where he gets to stretch right out to everything he can do.”

Filipo was also responsible for a moment of improvised comic genius on opening night, when his fake beard started to flap conspicuously off his face.

“It became the best gag of the whole show, because the actors had to keep coming over to put it back on. Eventually the audience started chanting ‘Take it off, take it off’ and he ended up ripping the beard off in front of 800 people, and then another actor took it and put it on a bald man’s head in the audience.” 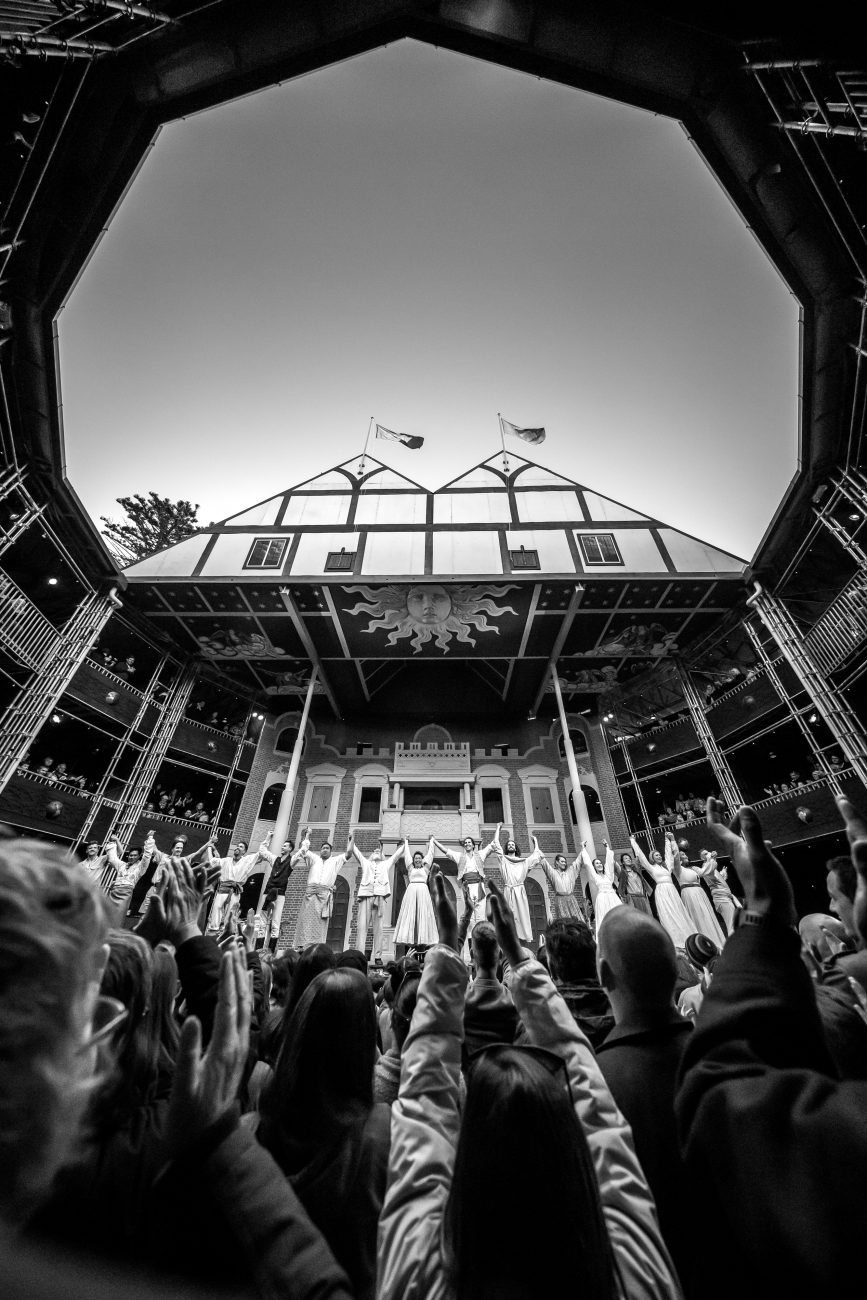 In most theatres, the audience is in the dark, but at the Globe, actors can see them, meet their eyes, glimpse their reactions.

“It really changes you as a performer,” McDowell says. The people watching are part of the spectacle, and that changes their behaviour, too. “If you’re seen, you have to engage in a much more proactive way.”

“That is kind of incredible in our country,” says McDowell. “People go to rugby games in those numbers, but not to theatre.”

So where does the appeal come from?

“It’s the spectacle, it’s feeling like you’re engaging in history somehow—a feeling that this is part of our whakapapa.”

Shakespeare’s plays have been performed many thousands of times over the past 400 years. Backstage before the show, McDowell asked the cast to visualise the first actor ever to say their lines, and the unbroken chain of players down the centuries who have recited them, in so many languages, on so many stages.

And it’s still possible to give those hallowed words new meaning. McDowell had a minor character deliver all his lines in Samoan. Just as Shakespeare wrote them, but translated. One night, she watched as it dawned on a group of high-school girls that the character was speaking their language.

“Watching their eyes widen, crying tears of laughter, as though they felt, ‘This is us, we own this more than anyone else in this audience does’—that was my goal, and I achieved it.”