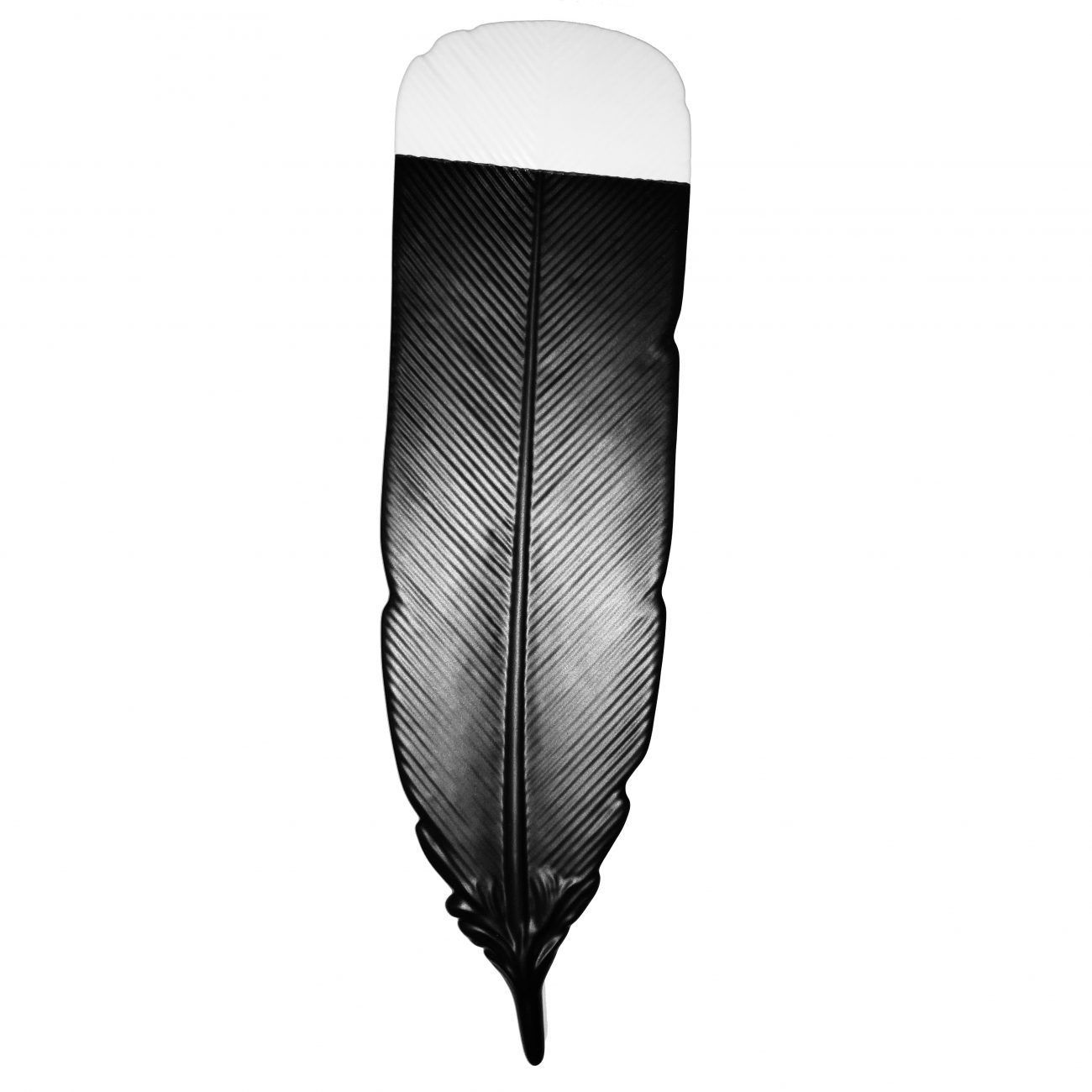 A parcel arrived today, one that I had ordered so long ago I had nearly forgotten about it. Inside, nestled within volumes of packing material, was a single feather. It’s black, and broad, and the top quarter of the feather is brilliant white to the tip.

Except that it’s not a feather. It’s made of ceramic, a giant-sized plaster replica of a feather belonging to a huia, a bird that was hunted to extinction more than a century ago—a bird gone so long that the shape and shade of its plumage are now a totem that powerfully signifies all that modernity abandoned and destroyed in this archipelago. For me, however, it also represents everything that makes New Zealand unique, and everything that still remains here.

Kākāpō, for instance, a bird that probably should not be here at all. The mechanisms of its absurd mating behaviour, and lack of success therein, should have been at odds poor enough to guarantee its relegation to the annals of pre-history. The kākāpō’s unique lack of preparedness for mammalian predators should have sealed its fate completely, if it were not for the precipitous hanging valleys of Fiordland, and the rugged outcrop of Stewart Island. At one point in the 1990s, the total population was barely 50 individuals.

On this tender genetic thread hung the future of the entire species. For four decades, conservationists have focused on the fortunes of the remaining individuals, increasing the population to 155. Today, as deputy editor Rebekah White reveals in this issue, scientists have turned their attention back to that frail genetic thread, analysing it in cross-section to reveal the fabric of the kākāpō genome, and the specific genes of every kākāpō in the population, to breed the population back to health.

The new knowledge has already led to one of the most successful breeding seasons ever, which researchers hope will be enough to ensure the kākāpō won’t go the way of the South Island kōkako, which may now be lost forever, despite the ongoing search detailed in the May–June issue. (North Island kōkako, too, had a close shave, with only the intervention of vigilante conservationists to save them in 1978—examined in Andrea Graves’ new Currency column on page 21.)

It was all too late, however, for the huia—though it may yet be saved, even a century after the fact.

In a 2002 paper published in the journal Common Ground, palaeobiologist Jeffrey Yule mounted a philosophical argument to restore species using genetic cloning of viable DNA that meet a very narrow band of criteria—that they were driven to extinction by humans; that the extinction occurred very recently; that the habitat is present to support a wild population; and that scientific effort in cloning extinct species does not distract from the effort to conserve species still extant.

Yule singled out New Zealand’s huia, Australia’s thylacine and North America’s passenger pigeon as examples that fit the criteria for ‘ethical’ cloning. (He even quoted a—now defunct—international university project to revive the huia that had already secured the support of the manawhenua, Ngāti Huia.)

So while the plaster feather now swinging from a nail on my wall echoes a distant past, it may also represent a distant future.

“Cloning could provide the means to not only correct specific past mistakes,” writes Yule, “but also the opportunity to demonstrate to a too-often-dispirited public that it is still within our power to repair some of what we have so carelessly broken.”

Genetic technology is rapidly bringing us into a brave new era of conservation biology, for better or for worse.