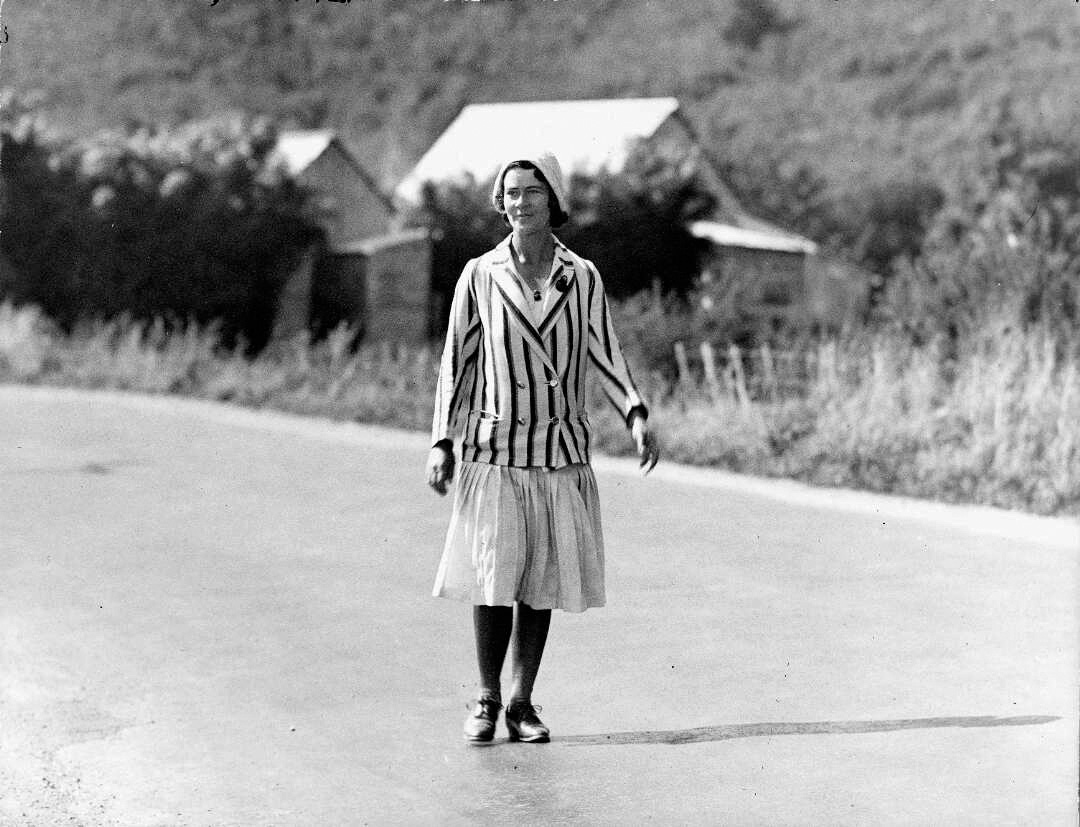 On a winter afternoon in 1932, Pahiatua-born Esther James strode into Bluff. It was no ordinary arrival. When the slightly built James crossed the town boundary on June 18, it marked the end of a 2500-kilometre journey on foot that had started at Spirits Bay, near the northernmost tip of the North Island, on December 3 the previous year.

The feat was no mere stunt to ink a name in the record books—though when James went on from Bluff, at popular urging, to tackle the short roads of Stewart Island, she became the first person to walk the length of the country. Her real purpose was to promote New Zealand-made goods to a country in the grip of the Great Depression. As the Northern Advocate wrote, shortly after she set out: “If 2000 people in this district were to order this week 2000 suits or dresses, it would mean employment for scores… It would be a gracious gesture and a noble Christmas Box to the New Zealand industry.”

James, who was in her 30s, had been one of the country’s first professional fashion models, then known as ‘mannequins’. While working for the New Zealand Manufacturers’ Federation, she came up with the idea of a publicity walk. After six months of training, she set off, kitted out with Dominion-made clothing and hat, sensible shoes from New Zealand lasts, and a haversack bearing a leather-bound logbook made from Mataura paper and signed by the Governer-General’s wife, Lady Bledisloe, a keen supporter of the cause. She carried a pedometer, and as she went, recorded distances and times, collected mayoral signatures and seals in the towns and cities she passed through, and assiduously noted the names and addresses of motorists whose well-intentioned offers of a ride she politely declined.

Stoically enduring the lack of tea while on the road—it was all imported—and declining New Zealand wine and tobacco, James nevertheless ate well. She boasted, on reaching Wellington, that despite her exertions—which included climbing Mt Taranaki on a ‘rest’ day—she had put on more than six kilograms in weight. Rain didn’t stop her. Nor did the presence “in quantity” of bulls on the road. While crossing the Rimutaka Range, she was thrown against a bank by a strong wind gust, spraining a foot, and was taken to the capital by car to recover. But even that setback was temporary—when she could walk again, she insisted on returning to pick up the journey where she had left off.

On the way, James took every opportunity to promote New Zealand industry by lecturing, attending social occasions, and giving press interviews. The Hutt News admiringly called her “a walking advertisement”, and added: “It is perfectly clear that if one-fifth of the goods now imported were made in New Zealand, factories would be working full time, and instead of there being a surplus of labour … there would be a shortage of workers and plenty of room for hundreds of immigrants.”

Her job done, James crossed the Tasman, reprising her long-distance work by becoming the first woman to walk the 1900 kilometres from Melbourne to Brisbane. This time she used the attention to publicise her home country as a tourist destination. A planned walking tour of Great Britain to promote New Zealand’s exports did not eventuate.