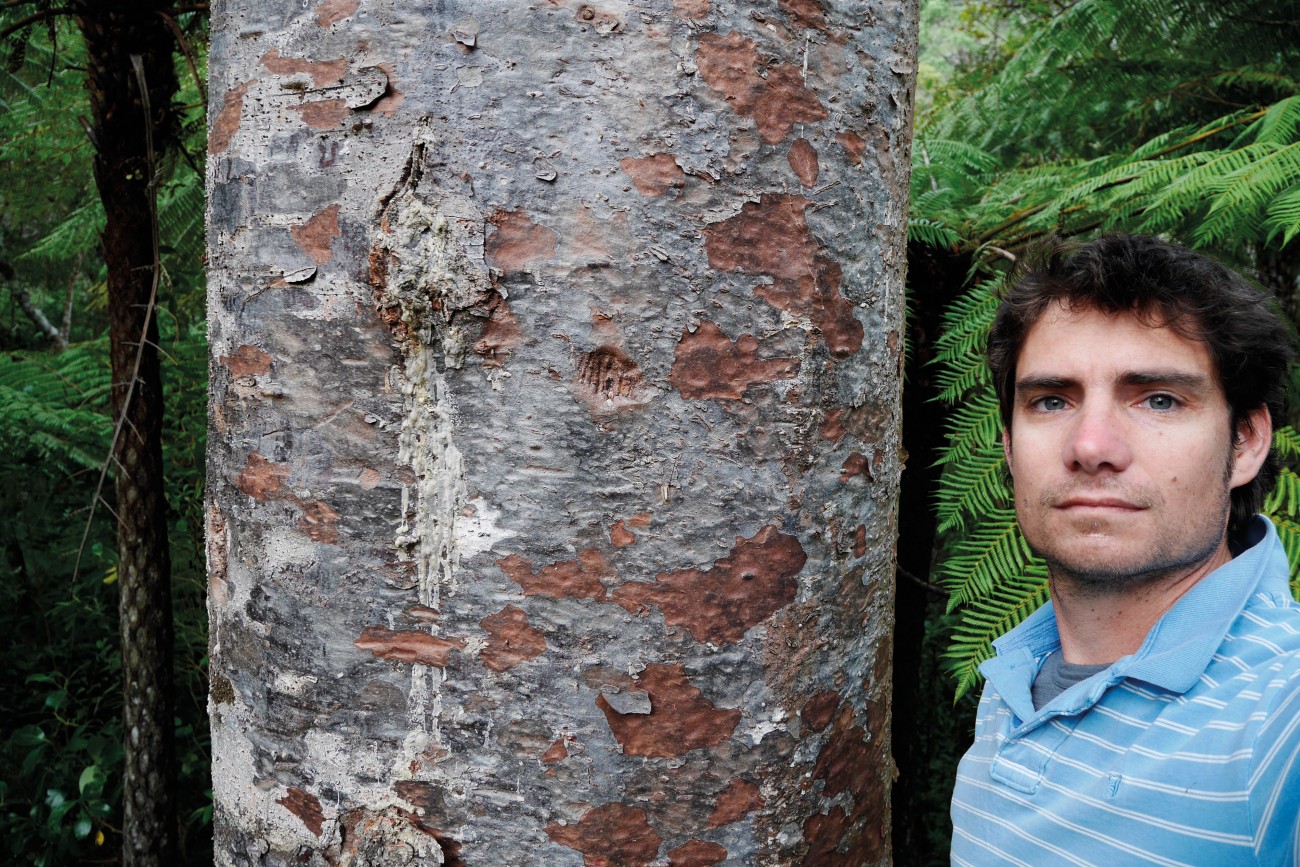 Phytophthora Taxon Agathis (PTA) is a microbe that attacks kauri, damaging the tissues that are the pathways of nutrients through the trees. It passes through the soil from tree to tree at the rate of a few metres a year, or is moved in soil borne on boots, tyres and equipment. There is no known cure and nearly all affected trees die as a result.

The disease is now widespread in Northland, Auckland and on Great Barrier Island, but news in March that it had been found in two trees in Whangapoua Forest on the Coromandel Peninsula sparked alarm among ecologists. The slow-moving pathogen had travelled nearly 200 kilometres into a little-frequented forest that hosts one of the largest areas of kauri still unaffected by the disease.

The Ministry for Primary Industries and Department of Conservation closed the 319-hectare forest, and in May the govern­ment announced a $25 million budget to fight Phytophthora. But the disease may be more widely distrib­uted than anyone appreciates.

On a weekend in June I travelled to a friend’s 40th birthday at a house tucked into the bush overlooking Pauanui. The property borders a conservation reserve, so we went for a ramble with the kids in the evening up a narrow four-wheel-drive track. The bush there is a mix of established natives with wilding pines blown in from neighbouring tracts of plantation forests. In many respects, the Pauanui Conservation Area is typical of mixed-use, public-access estates in the North Island and too well trafficked to avoid the invasion of weeds, and disease.

The first kauri I saw, a little ricker barely four metres high, oozed a plume of sap from a bulging lesion on its trunk. The resin was coagulated in thick ribbons that ran down to the soil like a limestone formation, and beneath the wound, the bark had sloughed away in sheets. Am I looking at Phytophthora taxon Agathis? It hadn’t been reported as far south as Pauanui, nor within 50 kilometres of here, and only two trees in Coromandel had so far tested positive. Yet the notion that this quiet killer can reach kauri forests anywhere makes the spectre of sap disconcerting. (I deferred to MPI to investigate.)

Directly across the track was a larger specimen, too wide in girth to stretch my arms around, and perhaps 30 metres high. The track bent about it in deprecating fashion. It may have been here for a hundred years or more, avoiding both fire and axe, but the quiet malevolence of PTA is creeping toward it even now if it hasn’t already hitched a ride on a tyre of a passing 4×4, or upon the boots of this editor, who stood at its base to admire the undulating surface of the trunk, rippled like sand at low tide.

It is astonishing that an organism just microns in dimen­sion can lay low a forest giant. It’s a cautionary tale.

Like the social and industrial ideology that set two-thirds of New Zealand’s forests to fire and axe, Phytophthora flows through the land like a destructive idea through a population it’s ubiquitous, and once started, it’s not easily stopped.

Have we already come too far to turn back? It may be too early to tell. The bacterium that caused the death of about a quarter of the cabbage trees in the north at the turn of this century seems to be less severe now. In that case, our understanding of the disease grew as the pathogen spread it affected different sized tree in different ways; trees in rural settings were more susceptible than those in forests; and those growing in cooler climates were less affected than those in the north.

Kauri dieback may yet be averted by good management or good fortune, but it is certain that as international trade grows and domestic traffic increases, the forests of our future will face more of these insidious threats, and need greater protection.