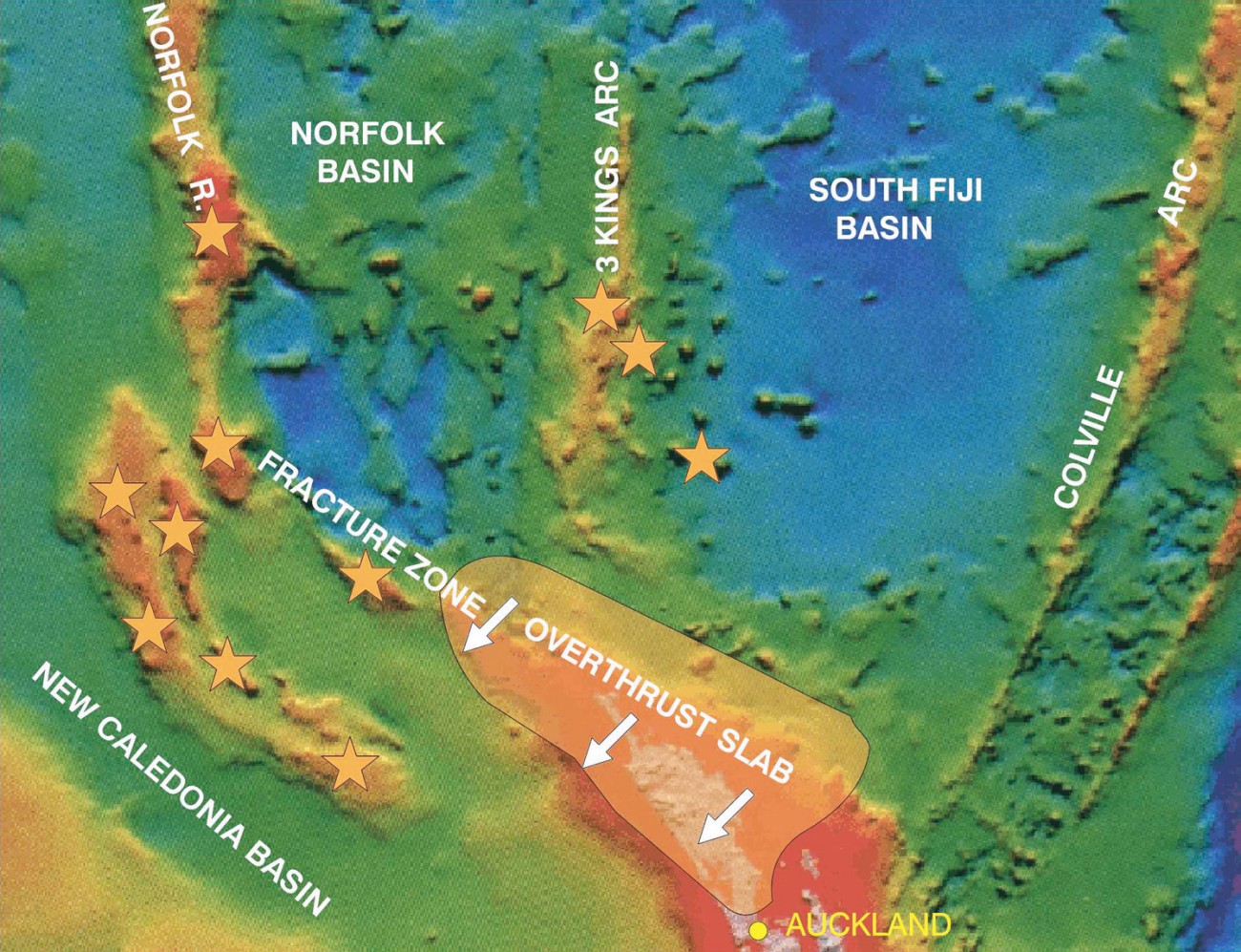 In august 2002, a scientific cruise to geologically map an area of seabed off the coast of North land uncovered evidence of a series of ancient but now submerged islands which scientists believe may have been part of a land bridge once used by organisms to reach New Zealand. The area in question lies just seaward of the continental shelf, along the North land peninsula which forms the upper part of the North Island.

Expedition leader Rick Herzer, from the Institute of Geological and Nuclear Sciences, says that the area “is one of the last great geo­logical hunting grounds of the Pacific, and we went out there in search of missing pieces to the South Pacific tectonic jigsaw.”

These days, understand­ing seabed geology and how it relates to landmasses has wider importance than just to science. Under the UN Law of the Sea Conven­tion, New Zealand has until 2009 to claim an extended economic zone (but not the fish within it), and this can include areas within 100 nautical miles of seafloor shallower than 2500 metres.Herder comments,“Our data provides some of the necessary underlying science and a geological link between onshore New Zealand and its potential extended Law of the Sea domain.”

During the 10-day trip and an earlier similar voyage, the research team aboard oceanographic vessel RV Tangaroa shot seismic profiles and dredged up rock samples from all around the Northland Plateau area.“We found flat tops on several seamounts, indicat‑ing eroded areas that were once land, and flat, eroded surfaces on bumps now buried beneath sedimentary layers under the seafloor,” says Herzer. Erosion takes place only on land or in very shallow water. Below the reach of waves erosion is insignificant.“We also dredged up sev­eral samples of shallow water limestone filled with lagoon-type fossils,” says Herzer.

In 1400 m of water, at the edge of one small plateau, the researchers found rhodo­liths—coralline, stony algae that form around a core of some kind, like a pearl. Algae need light to grow, so are found only in shallow water, confirming that the area under investigation was once close to sea level.

Another line of evidence also indicated that some of the area had once been at sea level. From the Cavalli Seamount, the team recov­ered several pieces of high-grade schist. Schist is formed 10 or more kilometres underground, and is usually only exposed on the surface by uplift and erosion. The nearest occurrence of simi­lar rocks is beside the Alpine Fault, 700 km to the south.

Granite was found on a neighbouring seamount. Granites are coarse-grained igneous rocks that have solidified slowly, far under the Earth’s surface. Uplift and/or erosion—usually of several kilometres of overly­ing rock—are needed to expose this rock.“How this particular granite reached the surface is not known,” comments Herzer, “but it is likely to be tied to the uplift of the nearby schist.”

Analyses of isotopes and nuclear decay in key minerals, and microfossils in an associated limestone, suggest that the schist rose from deep in the Earth to sea level between 23 and 21 million years ago. A grid of seismic reflection was shot around these bodies and elsewhere on the plateau to study the geological struc­ture responsible, and yet to be completed analyses of the granite will document its melting, cooling and uplift history.

“These rocks have come up from a long way down­ we estimate more than 10 kilometres of uplift in that area—and the seamounts on which they occur are sitting in a trough which has since subsided to some 2000 me­tres below sea level,” Herzer says. Remarkably, these are the only bodies of granite and high-grade schist ever to have been found in the North Island—even if they are slightly offshore.

Concerning the sig­nificance of the findings, Herzer says: “We believe that an archipelago of is­lands once existed north and north-west of New Zea­land, and over the course of several million years islands rose and sank in a sequence, moving from New Caledo­nia down to Northland. The uplift in New Caledonia took place 10–15 million years earlier than events in New Zealand. However, not enough seamounts and ridges have been studied to pin down the exact pattern and timing.”

The more islands that can be found to have once existed in the north of New Zealand, the better scientists can reconstruct a pathway by which certain plants and animals—such as the Poor Knights lily, Xeronema, and the large Placostylus flax snails—might have reached New Zealand.

Herzer admits that at present they are guessing that most of these islands would have been above sea level in the post-Oligocene (around 25-20 million years ago), and they don’t know if they were all present at the same time.Most of the New Zealand continent—which includes New Caledonia—started out as a relatively high area attached to Australia as part of Gondwanaland. When the supercontinent broke up and the pieces drifted apart, the New Zealand area was eroded heavily, and subsided for a time during the Oligocene (some 24 to 34 million years ago), the era from which most of the limestone deposits in New Zealand date (see New Zea­land Geographic Issue 51).

At the end of the Oligocene, a plate bound­ary developed through New Zealand off the North­land peninsula. What then happened is far from certain, but current think­ing suggests a plate pushed into Northland from the north-east. Existing land in the area acted like a wedge, splitting the advancing plate in a way analogous to pushing a couple of fingers into the edge of a sandwich, forcing the lower slice of advancing land downwards, and being over-ridden by the upper slice—termed an overthrust.

Some of the rocks that were forced down melted when they reached an appropriate depth (per­haps 60 km) giving rise to widespread volcanoes in the Northland–Three Kings area. There was also crustal uplift in places. Dating of lava deposits around the area give most of the volcanic rocks an age of 18 to 22 mil­lion years. Rocks from the overthrust are still wide­spread in Northland and extend almost as far south as Auckland. Northland has seen a lot of geological turmoil in its time!

Conventional wisdom says that the drowning of New Zealand wiped out many species. From those that survived, new species radiated, adapting to new habitats as New Zealand re­emerged from the sea This scenario means that many of New Zealand’s evolutionary changes have occurred in the last 20 million years.

However, with the dis­covery of the ancient archi­pelago, Herzer believes that it is likely that migration of flora and fauna to New Zealand was an ongoing event after New Zealand re­emerged. If true, this could have major implications for those seeking to understand the evolutionary develop­ment of the country’s flora and fauna. 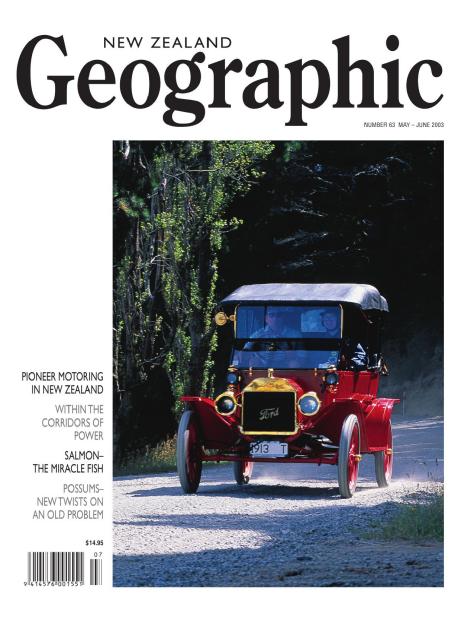