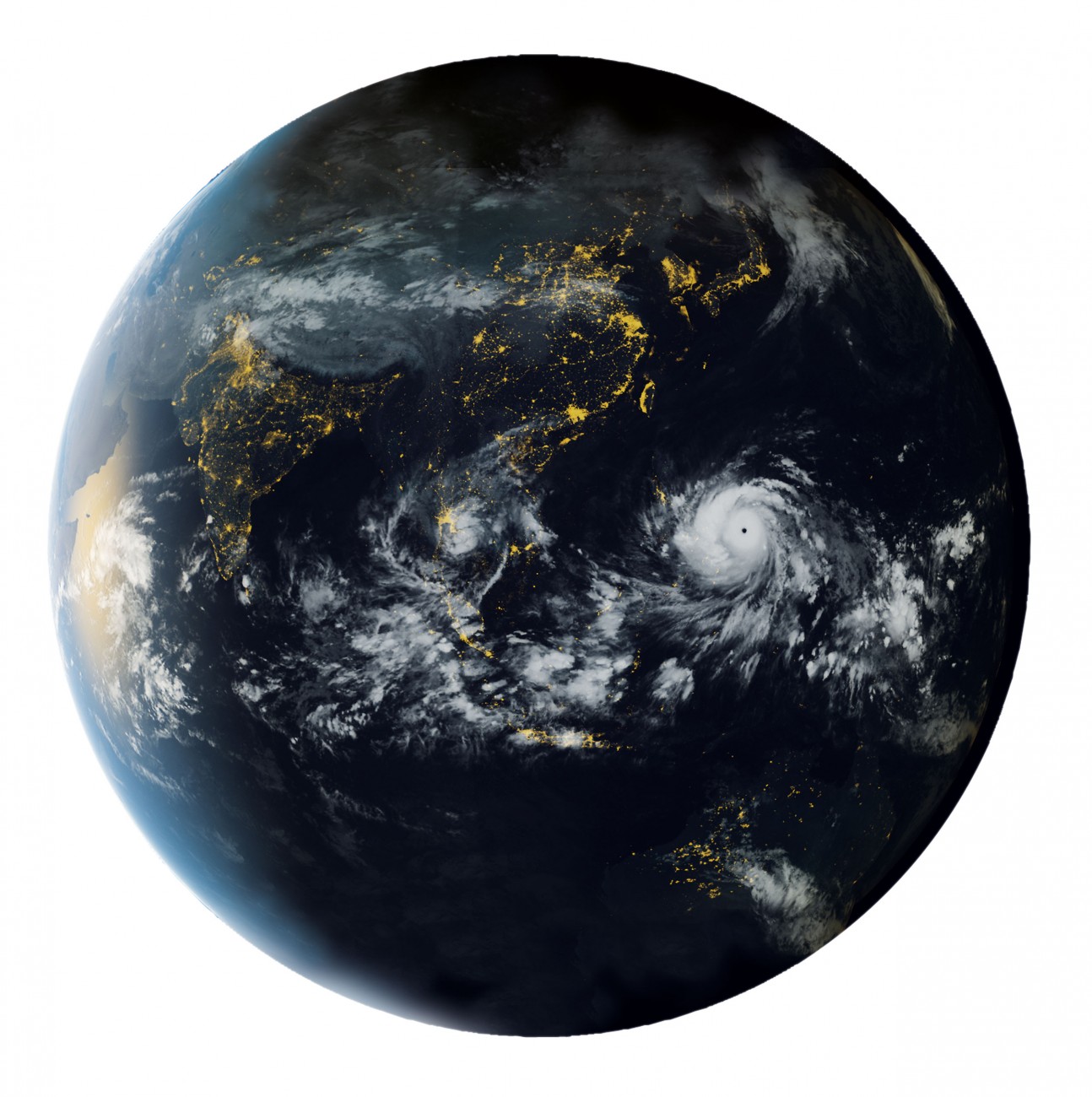 In the early hours of November 7, 2013, Typhoon Haiyan crossed the coast of the Philippines, just south of the city of Tacloban. Sustained winds around the eye of the typhoon were forecast to be 170 knots (315 km/h), with gusts to 205 knots (380 km/h), making this potentially the strongest tropical cyclone ever to have made landfall on record. Horrific as the wind was, most of the more than 5000 fatalities were caused by the accompanying storm surge.

Central pressure may have been as low as 888 hectopascals. The combined effect of the low air pressure raising the sea level and the winds piling seawater up against the coast caused a tidal surge of more than five metres, with large waves on top. This crashed into coastal dwellings with the force of a tsunami.

Although a storm surge had been fore­cast, its significance seems not to have been fully appreciated. A number of distraught survivors said they would never have stayed on the coast if they had been told the storm was going to be like a tsunami.

One of the worst areas in the world for storm surge is the Bay of Bengal, where shallow waters enhance the effect. In 1970, the Great Boha Cyclone killed between 300,000 and 500,000 in Bangladesh with a storm surge of 12 metres, and in 2008, storm surge from Cyclone Nargis penetrated 40 kilometres up the Irrawaddy Delta in Myanmar, killing more than 138,000 people.

In October this year, Cyclone Phailin threatened India, but was accurately forecast days in advance. Phailin was comparable in strength and track to a 1999 cyclone that killed around 10,000 people. This time, more than half a million people were evacuated, some to multistorey concrete buildings designed so the sea can flow through the ground floor. Consequently, there were only 44 deaths.

The devastation caused by Typhoon Haiyan has focused renewed attention on the findings of the Intergovernmental Panel on Climate Change (IPCC). The first part of its fifth assessment of the science of climate change was released at the end of September, with the rest to follow next year.

Written by hundreds of scientists, based on thousands of scientific papers and endorsed by representatives of the member governments, the report found that if the concentration of carbon dioxide and other greenhouses gases continues to rise unchecked, atmos­pheric tempera­tures, sea levels and ocean acidity will all increase to a dangerous extent.

Ironically, Haiyan is expected to contribute to global warming. The storm destroyed around a third of the Philippines’ rice crop and knocked over millions of trees. Carbon dioxide released as the vegetation decays will add to the greenhouse gases heating the atmosphere.

The report suggests human-caused climate change will increase the intensity of hurricanes by the end of the century. More than 90 per cent of the extra heat created by human industry is going into the oceans, and warmer seas feed more energy into cyclones.

Ocean heat contributed critically to the intensification of Typhoon Haiyan. Although the surface temperature of the sea was near average, the temperature 100 metres down was 3ºC above normal. The strong winds of a cyclone usually mix cooler water at depth and bring it up to the surface where it has a braking effect on cyclone development by reducing the heat transfer into the atmos­phere. This did not happen with Haiyan.

And, ironically, Haiyan is expected to contribute to global warming. The storm destroyed around a third of the Philippines’ rice crop and knocked over millions of trees. Carbon dioxide released as the vegetation decays will add to the greenhouse gases heating the atmosphere.

New research on the effects of Hurricane Katrina, which struck New Orleans in August 2005, found that more than 100 tonnes of carbon were added to the atmosphere by the decay of the three million trees brought down by the storm. That is more than half the amount of carbon taken out of the atmos­phere each year by the growth of forests in the United States.

Interestingly, ocean currents stirred up by Katrina in the Gulf of Mexico have uncov­ered remains of an ancient forest found at a depth of 20 metres off the coast of Alabama. Divers discovered the eroded stumps of Bald Cypress trees two metres in diameter that were drowned thousands of years ago when the sea level rose as the ice sheets melted following the last glacial maximum—monuments to the old mantra ‘history repeats’. Now that the trees have been uncovered, wood-boring marine animals will eventually destroy them. Before this happens, scientists hope to carbon-date the trees and take cores to reconstruct the climate during the thousands of years they were growing.

However, 2013, which had been forecast to have more hurricanes in the North Atlantic than normal, turned out to be the first season in 19 years when no major hurricane formed. With the benefit of hindsight, it appears that the lack of major Atlantic hurricanes was due to a persistent but unexpected wind pattern that delivered dry air to the region over and east of the Caribbean where hurricanes usually develop.

So what can we expect in our part of the world this summer and autumn? A near-average season is forecast, with about nine tropical cyclones over the Southwest Pacific—though without the influence of an El Niño or La Niña pattern, there is a higher-than-average chance the remains of a tropical cyclone will cross New Zealand. Ex-tropical cyclones remain New Zealand’s most damaging storms, so keep an eye on the forecast.