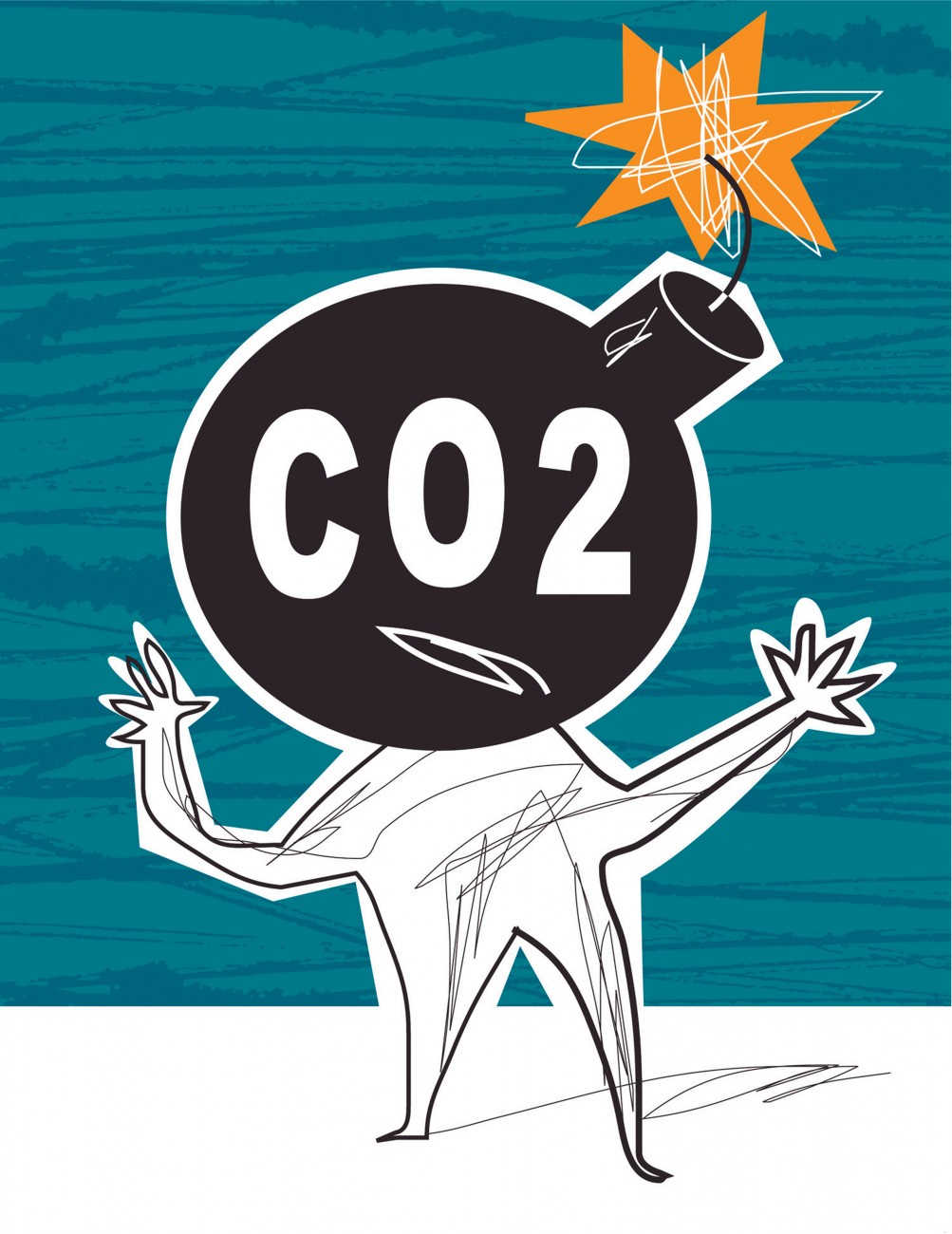 When Robert Oppenheimer, chief scientist of the Manhattan Project, watched the first nuclear test in the New Mexico desert in July 1945, its terrifying power brought to his mind the words of the Hindu god Vishnu: “Now I am become Death, the destroyer of worlds.” In that moment in the desert, the human species crossed a threshold, and for the next 40 years dwelt under the shadow of its menace. Sheer destructive capability redefined human existence.

“Now, too, with the environment,” writes American author and environmentalist Bill McKibben, “we are forced, for the first time, to understand that we are a truly titan­ic force, capable of affecting and altering the operation of the planetary whole.” Sea levels rise, ice caps melt and species’ distri­butions are reshuffled like so many playing cards. Even the idea of pristine wilderness disappears, because there is no part of the planet, not even the oceanic trenches, that lies outside the influence of the carbon di­oxide juggernaut.

The implications run deep. Just as the Cold War framed international politics for the lat­ter part of the 20th century, climate will be the global narrative of the 21st. How are we to deal with an issue of such magnitude, to navigate towards a future that doesn’t look like an ecological mushroom cloud? How do we approach what UN Secretary-General Ban Ki-moon has called “the defining chal­lenge of our age.”

The fundamental problem in dealing with the climate threat is getting our minds around its size and scale, says Bill McKibben. Writ­ing for the magazine Orion, he says:

“We haven’t come up with words big enough to communicate the magnitude of what we’re doing.

How do you say: the world you know today, the world you were born into, the world that has remained essentially the same for all of human civilization… is about to be something so different? Somehow ‘global warming’ barely hints at it.”

Even calling climate change a problem is problematic. It needs to move to some other category, says McKibben. Instead of being one item on a checklist, it must become the lens through which we view the world. He suggests a switch from words to num­bers—and to one in particular: 350. That’s the number of parts per million of carbon dioxide in the atmosphere that NASA’s chief climate scientist, James Hansen, has said is the absolute upper limit of environmental safety. “Above it and the planet would be unravelling. Is unravelling, because we’re al­ready at 385 parts per million,” notes McKib­ben, who, with his colleagues, has launched 350.org, a global warming action coalition.

Building such a global consensus will take time—and many threatened species do not have the luxury of waiting. The unravel­ling biosphere needs collective action—and fast. Writing in the journal New Scientist, Sharon Oosthoek notes that conservationists are “struggling like harried emergency-room doctors” to preserve biodiversity in the face of rapid human-induced changes. Many be­lieve the save-a-fragment-here, save-a-frag­ment-there approach will not suffice, and that the best hope for species struggling to adapt to a changing climate is to secure ar­eas large enough to allow them to move in accordance with their climatic tolerance.

For some, of course, there will be no­where to go. Cloud forests, alpine plants (such as New Zealand’s endemic daisies) and cold-adapted invertebrates (including species of weta) cannot migrate upwards forever. And where will our tussock lands re-establish themselves if heightened con­centrations of carbon dioxide enable trees to invade their habitat?

Several international environmental groups are calling for the protection of the entire northern boreal forest, an area 100 times the size of New Zealand, covering 11 per cent of the Earth’s surface. Because it re­mains relatively unfragmented, it would be a superb refuge for climate-stressed species, as well as a massive carbon sink. “However, just 10 per cent of the boreal forest is pro­tected, and the rest is under growing pres­sure from developers,” notes Oosthoek. Will the governments under whose aegis the for­est falls weigh its ecological value over its asset wealth?

While thinking big is necessary for tackling the ecological fallout of climate change, smart thinking is also called for. Merely pro­tecting pristine ecosystems is not enough. In a rapidly warming world, wilderness pre­serves may eventually fail to serve the flora and fauna they were established to protect.

Now, conservation managers are seeing the necessity to intervene in ecosystems, even to “reassemble” them when the dis­ruption is severe. This radical revision of the role of conservation has led some to question the very essence of what they do, writes Oosthoek in New Scientist. “Con­servation is, by definition, about maintain­ing the status quo, yet this may no longer be possible, given that pollution, climate change, exotic species invasions, extinc­tions and land fragmentation are altering al­most every ecosystem on the planet… rather than trying to preserve nature in aspic, [we] should work with change. We need to focus on optimising genetic and species diversity with an eye to helping plants and animals adapt, rather than trying to return ecosys­tems to their historic or natural state.”

New Zealand conservation scientists, schooled in the pragmatism that comes from seeing species go extinct, have long champi­oned such interventions, using cross-species fostering, translocations of threatened popu­lations, supplementary feeding and other methods to sustain species on the brink.

However, tinkering with the modus oper­andi of conservation will be mere rearrange­ment of the deck chairs on the Titanic with­out a radical revision of human economic priorities. Conservationists are used to giving their projects an economic spin, such as by calculating their contribution of “ecological services”—water purification, pollination, carbon storage, fish stock enhancement, and so on—and potential tourism income to GDP. Now the shoe is shifting to the other foot. It is time to judge economic choices by the yardstick of ecology. We need to be talk­ing about “the wholesale decarbonization” of our economies, says McKibben—“about removing the fossil fuel base on which our prosperity has so far rested, and about doing it in the space of a decade or two.” Yet as I write this, the United States Environmen­tal Protection Agency—no doubt under the thumb of the White House—has yet to de­cide “whether global warming threatens hu­man health and welfare and requires regula­tions to address it.”

In the face of that sort of governmental foot-dragging, many believe it is at the level of in­dividuals and communities that the greatest hope lies for reformatting the economy with an ecological operating system. I recently read in The New Yorker about the Danish island of Samsø, whose 4500 residents set themselves a goal in the late 1990s of be­coming self-sufficient in energy use within a decade. They formed energy co-operatives, invested in wind turbines, replaced oil-burn­ing furnaces with heat pumps and experi­mented with biomass and biofuels. Within seven years the island was producing more energy than it was consuming.

What makes the Samsø story especially interesting is that the islanders were not “green” by any stretch of the imagination. Nor were they particularly well off. They were a conservative farming community, planting traditional crops of potatoes, wheat and strawberries, relying on oil for heating and coal for electricity. Partly through the goadings of a local renewable-energy cam­paigner, partly through neighbourhood one-upmanship, partly, one imagines, because they fancied something a little more exciting than digging tubers and threshing grain, they decided to take on carbon emissions—and won. The island is today described as “the largest carbon-neutral settlement on the planet.”

Pundits predict that community-based action will be the engine of future environ­mental preservation. Installing energy-saving lightbulbs, becoming a locavore or trading in a gas-guzzling Sports Futility Vehicle (as one writer has rebranded the SUV) may seem trivially small actions.

But ripples have turned into groundswells before, and not just on windy Danish islands.

Noticing, perhaps for the first time, their energy-consumption obesity, many ordinary people appear will­ing to place their lifestyles on a diet, cutting down on hydrocarbons just as they may cut down on carbohydrates.

Aldo Leopold, considered by some to be the father of the modern environmen­tal movement, wrote in his 1940s classic A Sand County Almanac: “All history consists of successive excursions from a single start­ing point, to which man returns again and again to organise yet another search for a durable scale of values.”

These durable values—sustainable val­ues, we might call them today—have never been in such urgent demand.