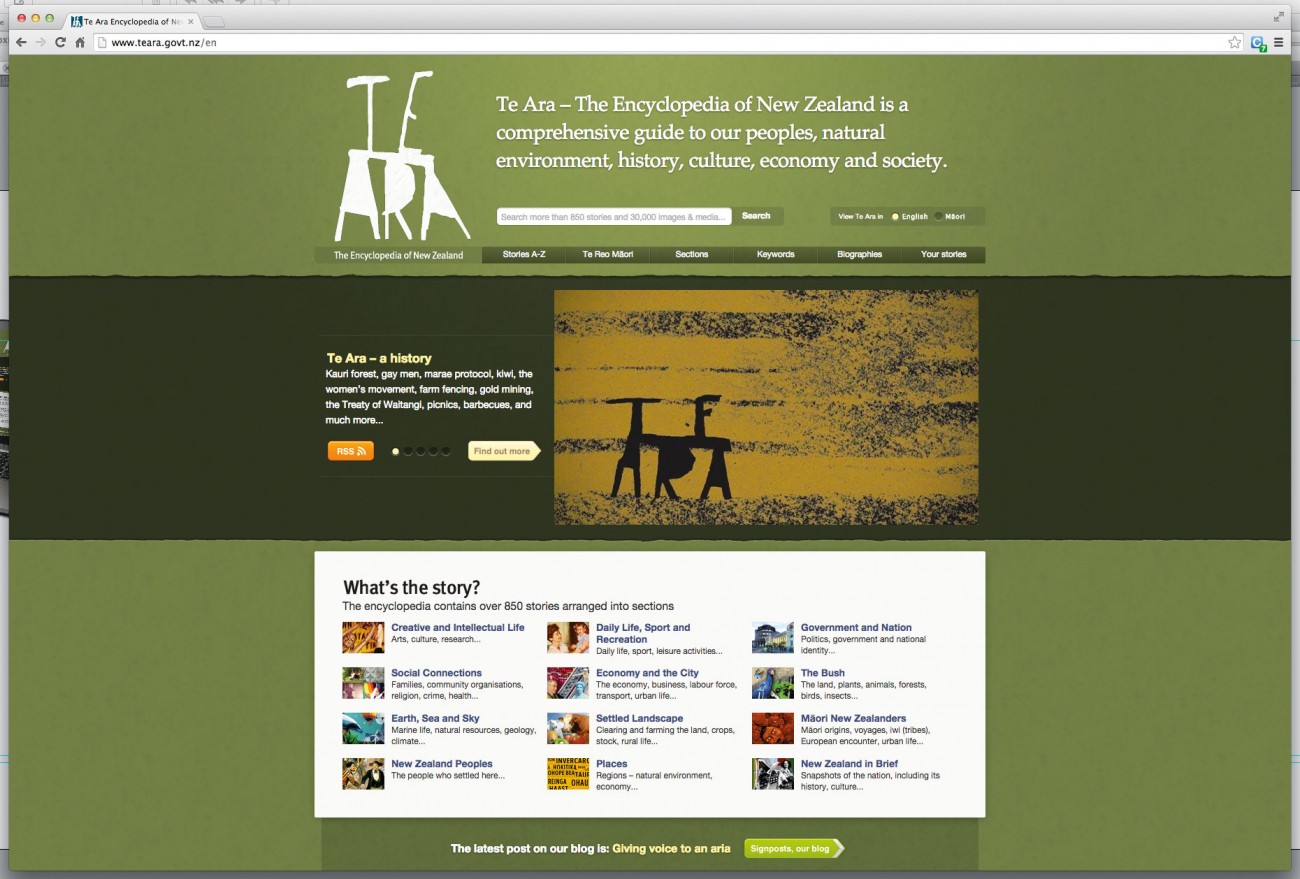 New Zealand’s latest encyclopaedia, Te Ara, has just been completed, but it hasn’t yet been printed—and probably never will be. Its thousands of articles are located online at teara.govt.nz, accessible to anyone with an internet connection. At more than three million words and featuring tens of thousands of images, Te Ara would run to more than 35 volumes if printed, senior editor Jock Phillips estimates.

The last New Zealand encyclopaedia was published in 1966, in three volumes. In the late 1990s, Phillips, then chief historian for the Ministry for Culture and Heritage, thought it was about time for a new one. His proposal was declined. Instead, Phillips helped create nzhistory.net.nz, an online resource that proved popular from the beginning.

“I was amazed at the public response and the number of visitors, so I put up a proposal to do a digital encyclopaedia,’ he says.

Phillips knew an online encyclopaedia could include multimedia content such as video clips, sound files and a wealth of images (Te Ara has about 30,000). This time, he hit the mark, and spent a year planning Te Ara before work began. “I remember the first day I came in and looked at the wall and thought, ‘Gee, how do I start a project as big as this?’’

At the time, there were no other expert-led online encyclopaedias to learn from. The crowd-sourced encyclopaedia Wikipedia was barely a year old. “We had to invent something that would work and would last,’ says Phillips.

Rather than proceeding by subject, A to Z, Phillips suggested Te Ara be written and published section by section according to an instalment plan. One section would be created each year by a team of writers, historians, scientists, translators and expert advisers. The first of 10, New Zealand Peoples, was published in 2005, and the last, Creative and Intellectual Life, went online this year.

One of Te Ara’s innovations is to deliver information in layers. Entries can be read in multiple formats: a short summary, a long article packed with details and sidebars, a slideshow of images, or, accompanying some stories, a single person’s real-life experience. Related articles appear at the bottom of each page, making it easy for anyone with the slightest amount of curiosity to disappear down an endless path of information.

Of course, not being a book comes with a few disadvantages. Although Te Ara has been publishing about a hundred new articles a year, it has never been reviewed. “The prejudice is that because it’s on the web, it’s somehow not as serious as if it was printed,’ says Phillips.

“My view is because it’s on the web and you can update it, it’s actually more accurate than if it was printed. For a long time, people resisted citing it in academic journals, but that has changed.”

Already the site has been revised; the entry for Canterbury was written in 2006 and has had a recent overhaul in light of the earthquakes. The 2013 Census has prompted another wave of ongoing updates. Now that the final section has been published, the team will systematically work through all entries to ensure they’re current.

Meanwhile, Phillips is retiring; he’s been on the project for 12 years and is happy to hand over the senior editorship to Nancy Swarbrick for the next round of work. “It’s like the harbour bridge,’ he says. “You never stop painting it.’