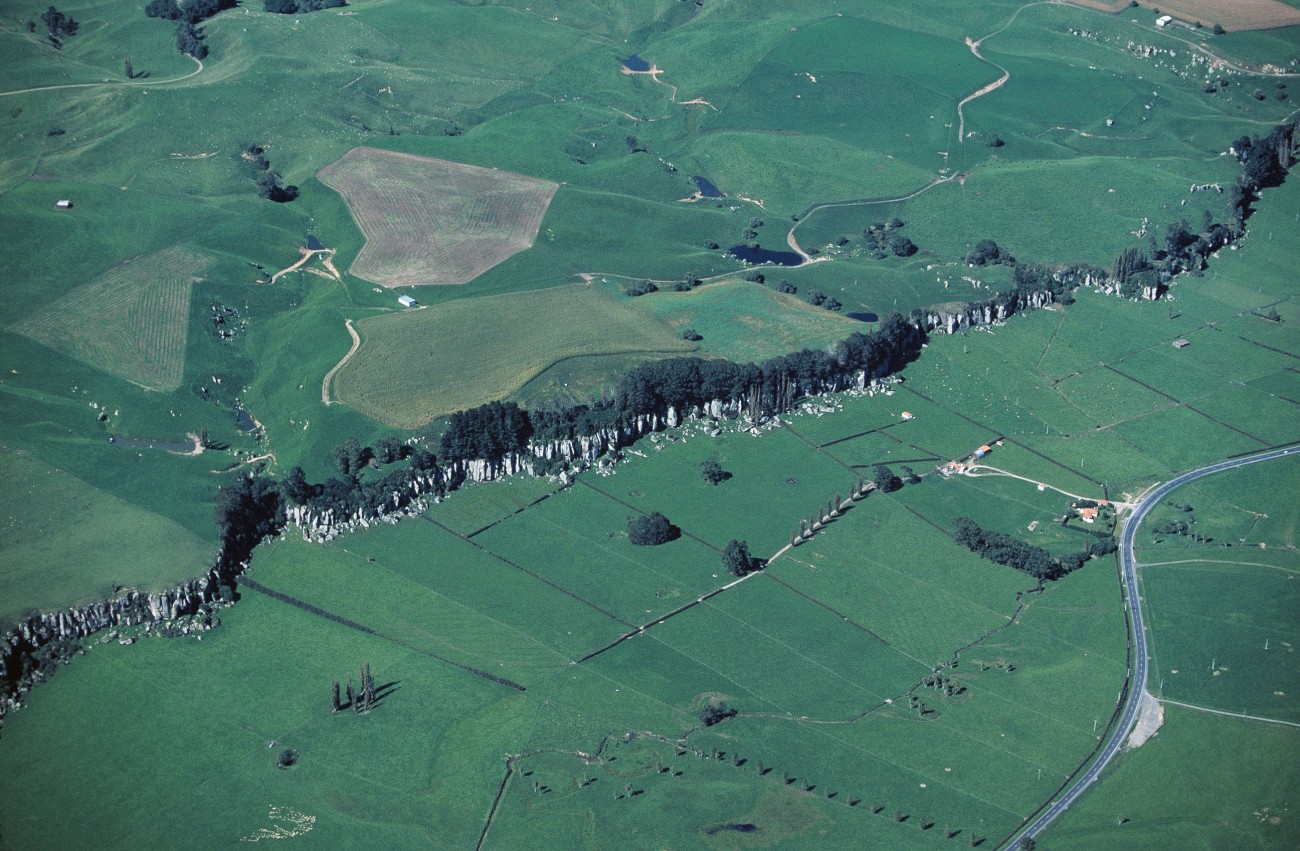 When and why the Waikato changed course has been investi­gated by Vern Manville and Colin Wilson, two scientists working for the Institute of Geological and Nuclear Sciences. They believe it was one of the consequences of the catastrophic Oruanui eruption of the Taupo volcano around 26,500 years ago. This ejected about 530 cu km of magma, making it 15 times big­ger than the better-known eruption around 1800 years ago.

The collapse of a caldera formed the depression we now know as Lake Taupo. The eruption destroyed an older lake that overlapped part of the new one but extended much fur­ther to the north-east. Some of the original lake water remained after the eruption but the new depression took between 100 and 200 years to fill completely. Fossil beaches high above the lake show that it was once over 100 m deeper than it is today. At that time there was an outlet to the north-west through Waihora Bay and down Mangakino Stream.

Over the following centuries, tributaries of the former Waikato River gradually eroded their way through the volcanic deposits to reach the lake near its present-day outlet. The result was a catastrophic flood, 80 cu km of water being re­leased over a period of probably just a few weeks, lowering the lake by over 80 m. Boulders more than 10 m in diameter found among the debris fans testify to the power of the flood, which rolled them like marbles through the river gorges.

For more than 300,000 years be­fore the eruption, the Waikato River had flowed through the Hinuera Gap, across the Hauraki Plains and into the Hauraki Gulf. Debris left by the break-out flood and subsequent upstream erosion covers an area of the Hauraki Plains 20 by 70 km to a depth of 25 m. It also filled the riv­erbed, so the Waikato began to spill westward before the Hinuera Gap and into the Hamilton Basin, where it left deposits over 25 m deep.

It is not certain that this was a one-off change. The river may have vacillated between the two routes for some time, and there is even a debris fan indicating that at one stage the river cut out to the Hauraki Plains through the Morrinsville Gap.

Before the eruption, and for the next several thousand years, temperatures were colder than today, vegetation was sparser and, consequently, erosion was more rapid. After the Last Glacial Maxi­mum, about 18,000 years ago, the world warmed and forests spread southwards, stabilising the land and reducing erosion. As its sediment load decreased, the river dug into its bed and became entrenched in its current route, through the Hamilton Basin to the west coast.

Heavy rainstorms may well con­tribute to changes of course, as un­consolidated volcanic debris erodes easily and floodwaters can carry so much of it that, when the flow re­turns to normal, it may dam the river. Such dams eventually breach, but not necessarily at the point where the river used to flow.

We do not have to go all the way back to prehistory to find dramatic examples of rivers changing course. Chinese history records several ex­amples of the Yellow River breaking its banks and shifting its mouth by as much as 600 km, flooding vast areas and taking thousands of lives in the process.

In the United States, the Missis­sippi is currently trying to change its course, as it has done every thou­sand years or so. Nearly 500 km up the river from its mouth, 30 percent of the Mississippi flows away down a distributary known as the Atchafalaya. This route to the sea is only half as long as that of the main river, therefore it is steeper and the water flows faster. The Atchafalaya has been growing for 150 years and would have captured the entire river by now were it not for the US Army Corps of Engineers. The corps has been busy in the swamps around New Orleans building levees and controlling water since the War of 1812.

Charged by Congress with holding the Atchafalaya at one third of the main flow, the corps dammed the entrance to the Atchafalaya and directed the water through a new entrance it built upstream. Made of 200,000 tons of concrete and nearly 200 m long, this consists of 10 piers and 11 gates for controlling the flow of water. Opened in 1963, it was nearly lost in a flood a decade later, when a wall of water six storeys high flowed over it and crashed 10 m down into the Atchafalaya. The turbulence was so severe that the whole structure vibrated and holes bigger than football stadiums were excavated in the riverbed.

Each day the Mississippi car­ries something like 356,000 tons of sediment out to sea. Before the levees were constructed some of this sediment escaped the river in floods and built up the surrounding land. Without this supply of material the level of the land is dropping as it compacts.

Parts of New Orleans are now 5 m below sea level, and the Mis­sissippi is becoming the world’s largest aqueduct. Sooner or later, many people believe, the Mississippi will head down the Atchafalaya, if not through the new gates then by breaking through elsewhere, and once it has gone it will be impossible to bring back.

Interestingly, the greatest eco­nomic consequence of the river re-establishing itself would not be the flood damage but the fact that the old channel would silt up too fast to be dredged and would thus no longer be navigable, forcing a large chunk of United States heavy indus­try to relocate at a cost of millions of dollars.

One of my favourite stories of people interfering with rivers concerns the Visigoths, who sacked Rome in the fifth century. After their leader, Alaric, had died, they dug a trench to divert the Busento River. Then they buried Alaric in the river­bed with his weapons and a portion of his treasure and redirected the Busento along its original course, over his grave.