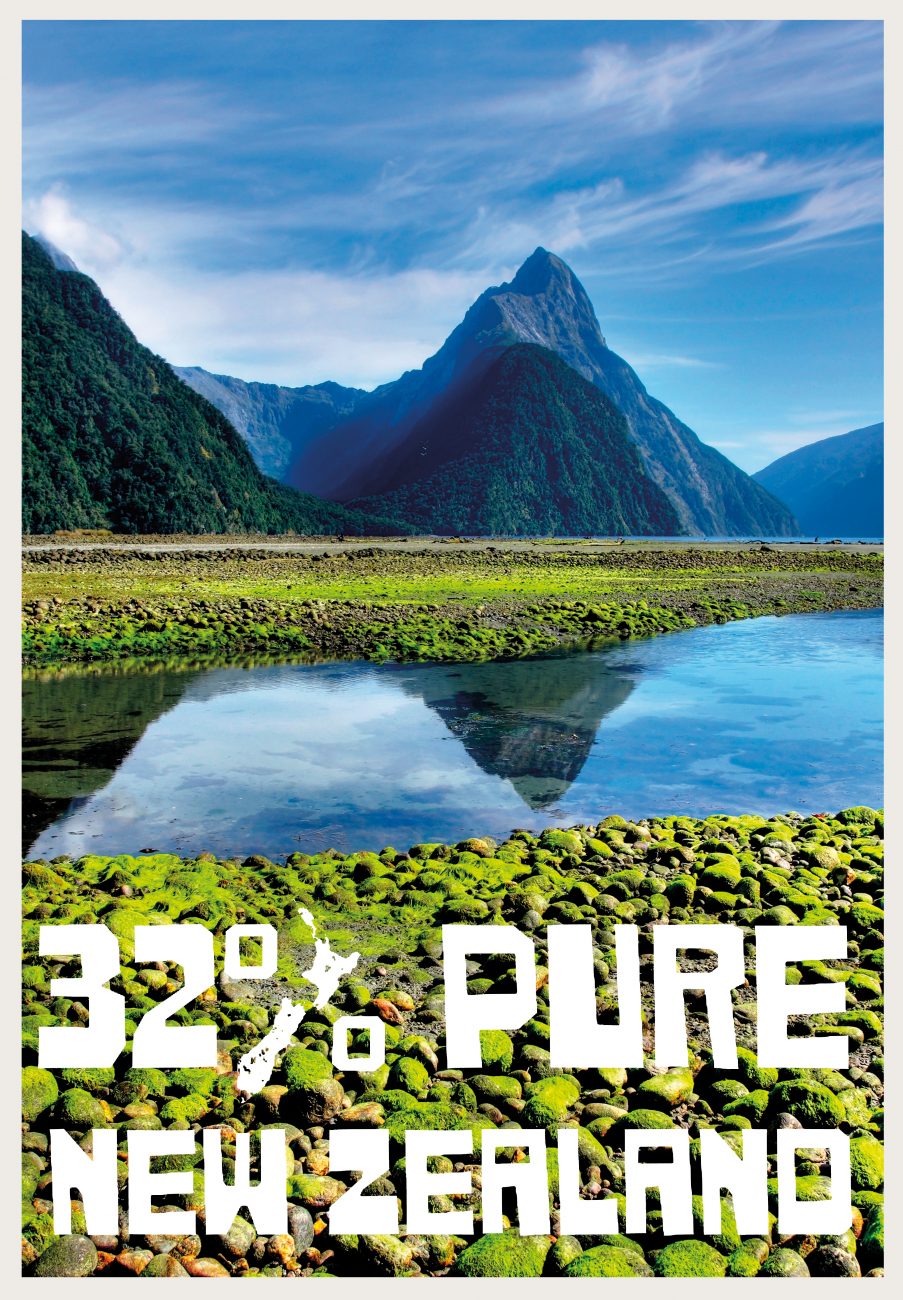 Mountains. Cirrus-streaked sky. Burnt golden fields mirrored in a lake. Is there a more apposite opening to a New Zealand film? Only keep watching. Because now the camera pulls back—a truck horn blares—and you realise you’re looking at a billboard beside Auckland’s Southern Motorway. A power company ad.

In one shot, Once Were Warriors nailed the incongruity between New Zealand as it often is, and how we’d like to be. Reconciling the two isn’t easy, as John Key discovered in 2011 on the BBC’s Hardtalk.

“For the most part,” he said, marshalling his qualifiers, “in comparison with the rest of the world, we are 100 per cent pure.”

Hardtalk’s Stephen Sackur had a sheaf of stats from Massey University water scientist Mike Joy suggesting otherwise. A year later, on the eve of The Hobbit premiere, Dr Joy was back. He’d told the New York Times Middle-earth was not all it seemed.

The article tabled an international study that ranked New Zealand 171st of 189 nations on various environmental measures—18th worst. While Joy uttered only two sentences­ the story drew heavily on a Ministry for the Environment report on our cow-shit-ridden rivers—he became the fall guy, a “traitor”, according to Newstalk ZB’s Sean Plunkett, and the subject of a Herald editorial chiding him for his “exaggerations” and “overstate­ment”. This time round, Mr Key eschewed machine-gunning the messenger. 100% Pure was a marketing campaign, he said, a bit like McDonald’s ‘I’m Lovin’ It!’

Huh? Never mind. The success of the 100% Pure campaign is that it resonates with us as much as we hope it will with the intended audience. To challenge the slogan rouses our national defensiveness. No one dares question the conceit that New Zealand is uniquely beautiful, a fact the whole world never stops talking about, apparently.

Only it’s not true. We’re one of the world’s greatest pesticide sprayers, and the 13th most enthusiastic fertiliser. We have more endangered species (proportionally) than anyone else. We boast the fastest known extermination in the world of an order of large animals (nine species of moa). Ninety per cent of our wetlands are gone. Half our rivers are no longer safe to swim in (largely on account of intensified dairying).

Lies, damned lies and statistics, say the defenders of Aotearoa Inc. Obviously our beaches are cleaner than a Bangladeshi shipbreaker’s, our air much sweeter than Beijing’s. And while we may not quite be 100% Pure, we’re better—way better—than anyone else. We’re natural environmental­ists. This is a stadium of four million amateur Attenboroughs.

Perhaps. However, the incon­testable truth is that our clean, green image is an acci­dent of history—the fact New Zealand was the last large landmass to be settled by humans, and that there still aren’t many of us here.

Head half an hour in almost any direction and see for yourself. We’ve made our living off the sheep’s back (and, latterly, the udder): the paddocks whoosh by for hours, eroding hills held in place by phosphate from Banaba, Nauru and now Morocco.

Being so small, we’re obsessed with punching above our weight; being so far away, we’re desperate to put ourselves on the map. At the Olympics, we devise ever-more elabo­rate per-capita medal tables. In that spirit, can New Zealanders claim to be—pound for pound—the finest deforesters in the world?

We can. Maori were accomplished slash­ and-burn merchants, reducing Aotearoa’s forest cover from 85 per cent to 56. The destruction wrought by European settlers halved this again in 100 years. Our forest cover is now 28–32 per cent, depending on the measure.

Few nations have destroyed so much, so quickly. But our low population gives us a chance to restore Godzone.

“New Zealand: 32% Pure” mightn’t quite cut it, but how about a marketing mantra that appeals to our tendency for understatement, the most appealing aspect of our national character?

Not the clichéd faux ‘irony’ of sepia-tinted, 70s Stubbies and bum-cracked backyard cricket nostalgia. But a slogan such as “New Zealand—Not the Worst”, judiciously positioned in front of Mitre Peak? Or even “Not Bad, and Getting Better”? No need to talk ourselves up too much. It’s not the New Zealand way.