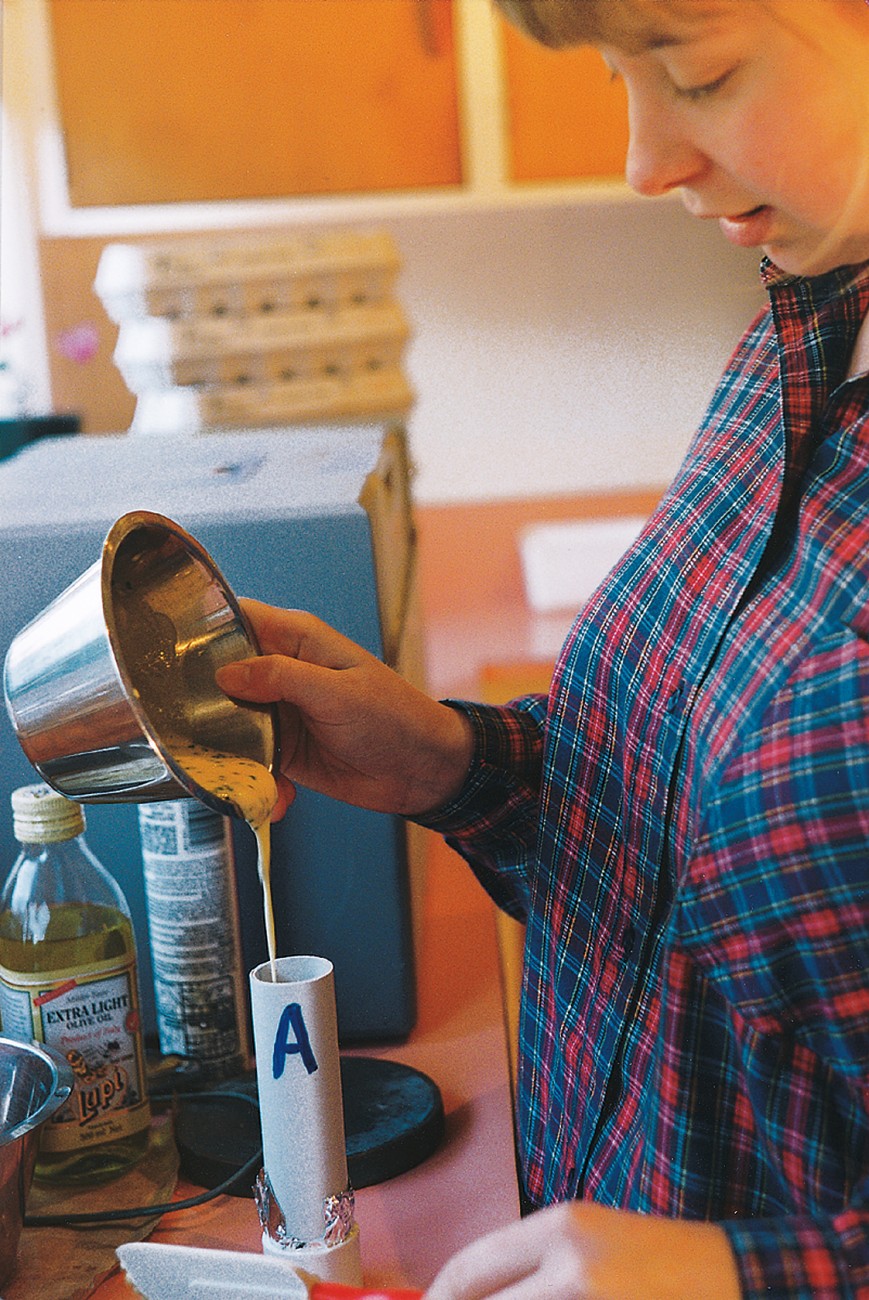 Ex ovo omnia– “everything is from an egg”-is a concept unlikely to trouble readers of this journal, unless they were to consider what might hatch from an egg long enough to yield 30 identical slices when hard boiled-and what might have laid such an egg.

Visitors to the 21st ECNZ National Science and Technology Fair, held in December at the Museum of Transport and Technology in Auckland, will have it cracked. Anna Pilbrow, a 7th-former at Christchurch’s Burnside High School, won the premier technology award for constructing such an egg. Anna saw a need in the catering industry for a “continuous, ready-to-serve” hard-boiled egg, one that would yield more than a paltry four slices. This she created by “rearranging” the contents of many hens’ eggs into a long cylinder and hard-boiling the mixture. The resulting tubular mega-egg, apart from its length, shares the characteristics of an ordinary hard-boiled egg, with the added advantage that garnish and colouring may be added before boiling.

Food was on the minds of a number of other entrants in the technology category. At Taupo Intermediate, Simon Smith developed a more refined version of the can-on-a-stick fruit picker. Simon’s came complete with adjustable pole, collector bag and stalk-cutter.

The bag, fitted beneath a neck made from a bottomless tin can, had a baffle system to minimise bruising, while a draw cord and toggle allowed easy release of fruit from the bottom. The cutter, a V-shaped piece of aluminium sharpened along its inner edges, doubled as a guide.

The bracket holding the tin can was adjustable, allowing the operator to get at fruit from different angles.

Frozen rather than fresh produce was the focus of Orewa College’s Lisa Brooks. She noticed that food packaging in her local supermarket freezer was often wet, and that the freezer didn’t feel very cold. Was poor storage resulting in food of reduced quality and an increased risk of bacterial infection?

Lisa thought an indicator on frozen food packets to show whether they had been stored at the correct temperature would be of interest to shoppers. Such a device would have to alter irreversibly on thawing just once, so customers could see at a glance if defrosting had occurred at any time.

After studying the difference between the frozen and unfrozen states, and what changes take place during thawing, Lisa came up with three successful indicators.

The first used a small slice of apple, which remained white while frozen but gradually turned brown on thawing: the longer the packet had been defrosted, the browner the apple. The second consisted of a white cotton pad with a non-absorbent X-shaped coating on one surface, placed over a small slab of red-coloured ice (a substance made to a “secret recipe”). If the ice melted, the pad, except for the X, absorbed the red solution. A white X on a red pad, therefore, indicated defrosting. The third was a tick-shaped piece of ice that became a shapeless blob when it melted.

Niklas Moore of Matarau School was more concerned about risks to New Zealand’s radiata pine plantations than to human health. Would the use of other species to reduce our dependence on a single type of tree be advisable? He had seen bamboo being used for scaffolding in Hong Kong, and pondered its possible uses in this country.

Niklas produced a number of different textured bamboo fibres, from which, by mixing them with polyester resin and pressing in a homemade press, he made samples of fibreboard. Tests showed these to be equal or superior in strength to commercially available boards, indicating locally grown bamboo could be a viable alternative in the production of commercial fibreboard for the construction industry.

The exhibits of other budding technologists also proved Kiwi ingenuity to be alive and well: a comparative survey of the efficiency and humaneness of various mousetraps available on the market; a home-produced X-Zylo that outflies the commercial model; recyclable plant pots; a mask to be worn while travelling on aeroplanes to combat dehydration; a comparison of the noise levels produced by various items of domestic machinery.

In the science category, the premier award went to 4th-former Rawiri Waru of Rotorua Boys’ High. Rawiri was interested in the effect of weather on the performance of geysers at Whakarewarewa. To supplement his field observations and background reading, he built two ingenious pieces of apparatus for laboratory tests. The first was a glass geyser, which allowed him to model fluid dynamics. The second was a geothermal simulator, complete with fault lines, hot aquifer, recharge systems, heat chamber, surface reservoir and geyser vents. By blocking off vents, streams and aquifer in various combinations, Rawiri was able to manipulate the circulation system and vary geyser activity accordingly. In particular, he recreated the effect of El Nino weather patterns-dry periods followed by short spells of heavy rain. His combined field and lab data allowed him to propose a model for the operation of Rotorua’s famous Pohutu Geyser.

Not the boiling waters and sulphurous steam of New Zealand’s geothermal areas for Virginia Dawson and Jacinda Ardern of Morrinsville College. They frequented the genteel domain of bowling greens in an attempt to identify and defeat a fungus causing damage to the billiard-cloth lawns. With painstaking effort, the 6th-formers isolated the fungus and ran trials to test a commercially available fungicide. The product proved to be not only expensive but also ineffective, and the pair embarked on the search for a soil bacterium that would do the trick. Samples of forest soil yielded a bacterium that inhibited the growth of the fungus, but not enough. Testing and trialling continues.

Also concerned with biological control was Amanda White of Nelson College for Girls. She developed a spray to keep down the numbers of psyllids-lea f-hopping insects-on the sweet-smelling boronia plant, cultivated for oil extraction. After testing the effect of psyllids on plants and researching both traditional. Maori and conventional methods of bug control, Amanda concocted a spray made from ngaio leaves, soap and water, which proved efficacious.

Pests of another kind were the focus of Haydn Luckman’s project at Auckland Normal Intermediate. “Foreign invaders” such as possums, rats and mustelids cause extensive damage to native fauna and flora, and Haydn sought a means of control. His bait trials suggested a single bait could be developed to attract both herbivores and carnivores, targeting many species in one hit. Amongst the enticing ingredients were cheese, sausage, bacon and egg pie and mutton fat. Such morsels might run the risk of catching humans too!

Sailor David Tucker, at Napier Intermediate, was more concerned about controlling the speed of his boat, preferably making it go as fast as possible. Tests on the water to determine whether it travelled more swiftly on a lean or when level indicated heeling to leeward was fastest. However, subsequent mathematical testing using a technique called linear regression proved a level boat was faster under most conditions.

And if David ever wondered why his red socks looked maroon after a dunking, he could do worse than ask Christina McCombie and Meredith Rose at Otago Girls’ High. They were intrigued that some things look darker when wet. Using a light-tight box of their own construction, with built-in goniometer (an instrument for measuring angles), they plotted the wet and dry reflectivity of various papers, cardboards, cloths, ceramics and painted surfaces. They used their measurements to gauge the predictive powers of the various theories on offer, all of which they found wanting in some degree.

Other young boffins rose to the challenge, shedding light on the possible medicinal properties of New Zealand native plants, the effectiveness of different acne-prevention products, the extent of lead pollution in Timaru, the sensory faculties of seagulls, the effect of differing CO, levels on the rate of plant growth and the ecology of the kotukutuku or tree fuchsia.

New Zealand’s young scientists and technologists continue to do their country proud. Most of the winners of the 1997 national fair will be exhibiting in 1998 at the First Youth Science Festival of Asia Pacific Economic Co-operation in Seoul, and also receive an education scholarship.

Year by year, students have earned such rewards through mounting exhibits of increasing sophistication-identifying a problem or need, carrying out intensive research, running rigorous tests, learning from their mistakes and coming up with a new piece of knowledge or application.

Some have gone so far as to consider where their discoveries might actually be employed, or how their creation could be marketed, packaged, priced and patented. After all, if an egg can be tubular, why not also golden?