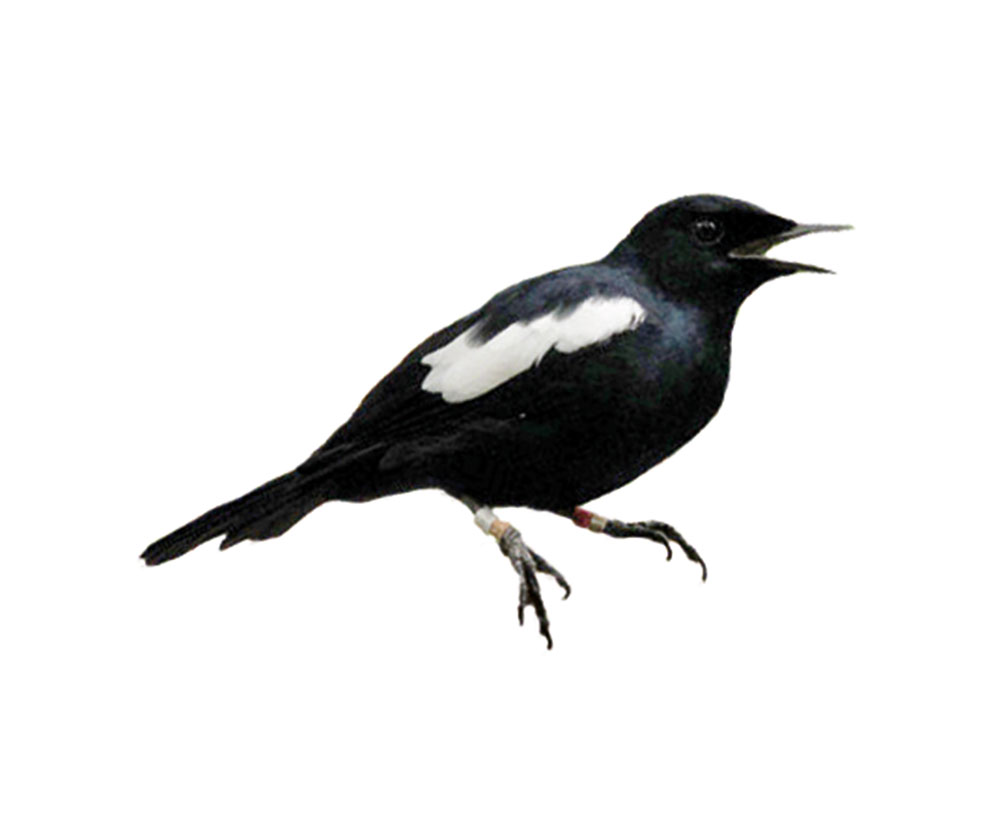 Yesterday, I tried to catch a magpie-robin in the Seychelles. Picture an all-black bird, bigger than a New Zealand robin but much smaller than a magpie, with a band of white feathers on each wing. It was hopping among the branches of an Indian mulberry tree, just out of range of a hand net wielded by a young conservation ranger who was trying to catch and band it. Another ranger and I were assisting, waving our arms and shaking branches and trying to shepherd the robin towards the catcher. But the cheeky bird eluded us.

Like our robins, magpie-robins spend a lot of time on the ground, often following in the lumbering footsteps of giant tortoises. As the tortoises haul themselves across the forest floor, their feet and heavy carapaces scuff the surface of the soil, exposing a smorgasbord of insects for the robins’ delectation.

And like so many ground-dwelling birds, magpie-robins cannot coexist with rats. In a Seychellois version of a story familiar to every New Zealander, magpie-robins were once a widespread species whose numbers dwindled through loss of habitat and predation until they survived on just one small island, Frégate. And then rats reached that island, too.

Happily, this story doesn’t end with well-fed rats and an extinct bird. An eradication operation (masterminded by New Zealanders) exterminated the rats from Frégate in 2000, and several pairs of robins were translocated to other rat-free islands to create insurance populations. It was on one of these islands—Cousine—that I engaged in some impromptu robin wrangling and reflected on a chain of influence that links the Seychelles with New Zealand.

This past year, as well as being a milestone for New Zealand Geographic, marking 25 years of celebrating all things Aotearoa, was the anniversary of two little-known events that helped change the course of nature conservation around the world.

At that time, conventional conservation wisdom held that predators could never drive a species to extinction, and that once an island was invaded by predators, eliminating them was impossible. Those assumptions were overturned by what occurred on two New Zealand islands 50 years ago.

One happened on a tiny island the size of three rugby fields in the Hauraki Gulf. Maria Island, or Ruapuke, part of a group called The Noises, was invaded by rats in 1959. The rodents made rapid inroads into the local bird population, killing nearly 1000 white-faced storm petrels. Alarmed by the carnage, members of the Forest and Bird Protection Society took prompt action, laying rat bait by hand across Maria Island and some nearby islets called the David Rocks. In 1964, the islands were declared rat-free—a first for New Zealand, and one of the first successful island pest eradications in the world.

The second event happened in the far south of the country, off the coast of Stewart Island. In the early 1960s, rats invaded 939-hectare Taukihepa/Big South Cape Island, one of the Muttonbird Islands. By the time Wildlife Service officers (including Don Merton) got to the island in 1964, it was too late to save the bush wren, the South Island snipe and the greater short-tailed bat, but the South Island saddleback was successfully relocated to a rat-free sanctuary, and thrives today.

Merton, whose name became synonymous with endangered-species recovery, often said that the extinctions he witnessed on Big South Cape galvanised him to take unapologetic action to rescue similar predator-threatened species from a similar fate.

The subsequent record of both rescued species and de-ratted islands speaks for itself. Each decade since 1964, conservation agencies have been able to add an extra zero to the size of islands successfully cleared of rats. Campbell Island, the largest New Zealand island to be de-ratted, in 2001, is 12,000 times larger than little Maria. Ten per cent of New Zealand’s islands are now rat-free.

And now, incredibly, people are talking about eradicating rodents from every New Zealand island. Predator-Free NZ, leading the charge in this audacious goal, hopes to be well on the way by 2040, the bicentenary of the Treaty of Waitangi.

Unless you’ve seen the flourishing biodiversity of a rodent-free island or sanctuary—such as Tiritiri Matangi, or Zealandia, or even Campbell Island for the adventurous—it’s hard to appreciate how dramatic is the impact of pressing the ecological reset button for islands, removing the invasive elements and giving the native species a fair go.

Keith Springer, a New Zealander who managed the pest-eradication operation on Australia’s subantarctic Macquarie Island that got rid of rats, mice and rabbits simultaneously, spoke recently about visiting the island again a few months after it had been given the all-clear. He described walking among the tussocks and megaherbs and seeing something he’d never seen before. The tussocks were covered in some kind of silvery material. He looked closely and saw they were spider webs. No one alive today had ever seen spider webs spangling the tussocks at Macquarie Island, he said.

With rodents gone, spiders can spin their webs in safety—one small component in what will be a giant ecosystem recovery. And it stems from two unheralded events in New Zealand whose impact has rippled around the world, lapping ashore even on the Seychelles.