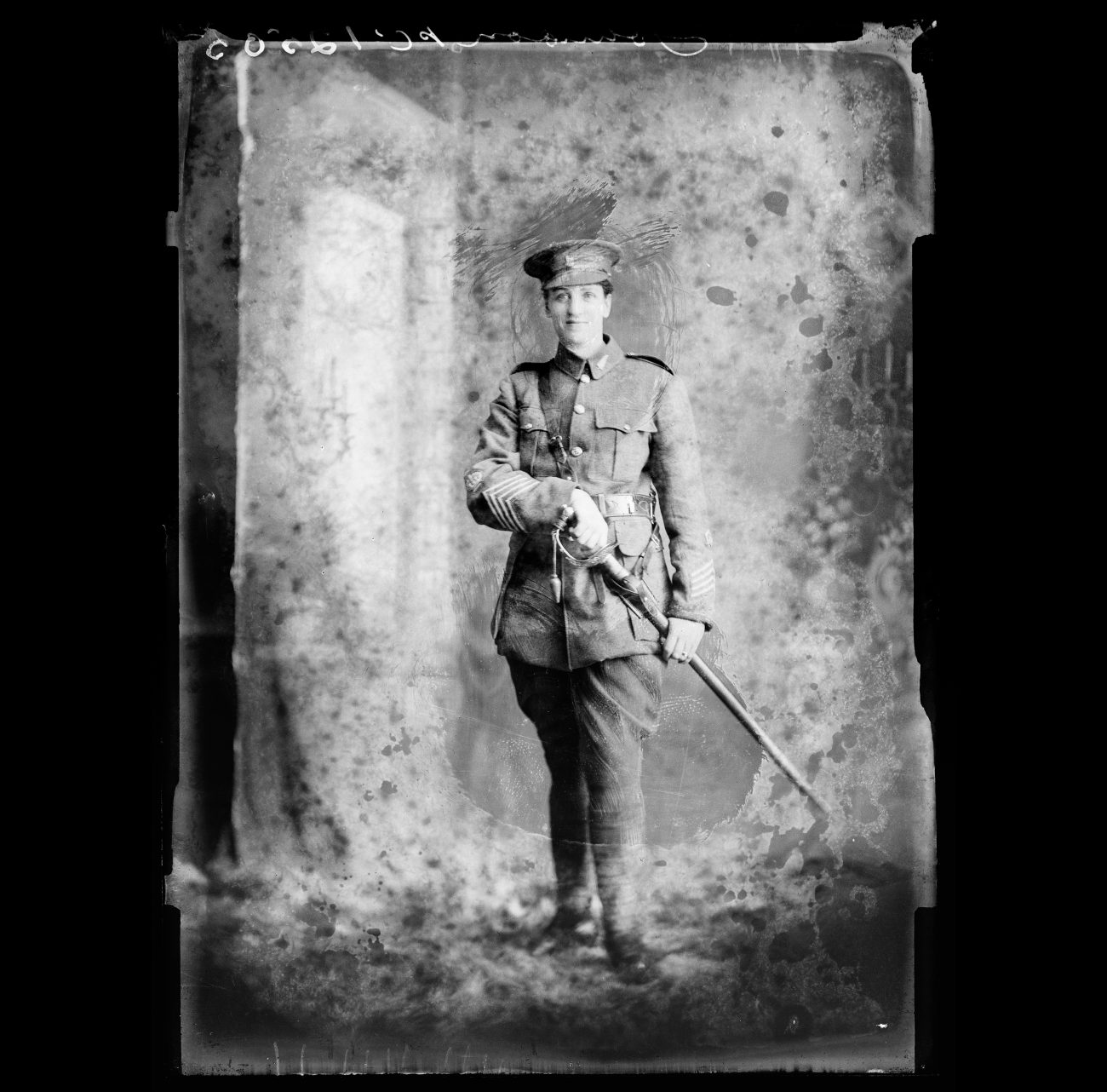 Mrs Johnson peers out through the mists of time. About her face, the patina of the old print has been scratched away a little—like condensation wiped from a mirror—to reveal sepia details as sharp as the day they emerged from the pungent tray of fixer. Her hair is cropped, close and dark, and on her wedding finger she wears a band and an engagement ring with a substantial stone. She acknowledges the camera with a faint smile, but her eyes are glassy, and gazing slightly to the right, as if looking at the photographer rather than the lens.

But this is where any sense of the ordinary ends, and only mystery, inference and incomplete records begin, for women were not admitted to combat roles in the New Zealand army until 2001. And while her cap features the insignia of the New Zealand Rifle Brigade associated with the First World War, the rest of her uniform appears to be of Boer War vintage. An insignia on her sleeve is that of a Boer War Regimental Sergeant Major, and the breeches are what is known as a ‘Calvary cut’. She holds an officer’s sword, and while she has wrapped her calves in puttees, she wears ladies shoes.

Who is Mrs Johnson? And what is she doing wearing a soldier’s uniform?

Fifteen years ago, in the corner of a dusty attic at 147 Cuba St, Wellington, a new tenant unearthed a collection of 3000 glass-plate negatives. It turned out to be the archive of one of the city’s most celebrated portrait studios, Berry & Co. Among them were some 120 portraits of soldiers, photographed in uniform shortly before leaving for the battlefields of Western Europe and northern Africa.

Each share the classical values of the dry-plate photographic process and large-format camera—a shallow depth of field, pin-sharp detail, patina and scratches on the fragile gelatin, alabaster skin tones, and those luminous eyes; a function of subtle movement during the long exposure.

It gives the subjects a ghostly quality, apt given that the odds of the Great War dictated that, in many cases, this was the last picture of the subject ever taken.

The collection is the subject of intense scrutiny at Te Papa, where researchers are determined to discover the identity of the sitters (often marked only with a surname) from military records, even soliciting information from the public over social media and photos-sharing websites. They’ve become known as ‘The Berry Boys’, and to date, more than 60 have been identified and descendants tracked down as part of a wider project for the upcoming World War I centenary.

Among the plates, however, are a very small number that are dramatically different. ‘The Berry Girls’ donned uniforms belonging, presumably, to their husbands, often for fundraising efforts.

Examining the portrait of Mrs Johnson, researcher Alan Dodson found matching records for a William Johnson, documented in Auckland Museum’s Cenotaph Database as having fought in South Africa. Public records held by the Department of Internal Affairs detail two Wellington-based women of an appropriate age who married a William Johnson—Alice Maud Beighton, born 1885 (30 at the time of the photograph), and Catherina Eva Cross, born 1892 (just 24).

The records indicate that William Johnson was discharged to Wellington after his service ended, so it is likely that he and his enigmatic wife remained in New Zealand after the photograph was taken in 1915, and watched as a younger generation left the shores to serve the purposes of the Empire on the other side of the Earth. Three decades later they may have watched their own children depart for service in World War II.

But is it Alice or Catherina drawing her husband’s sword from its scabbard? And as she gazes back at us, across a century of warfare and social turmoil, what can we learn from the wry smile and those glossy eyes? Perhaps only her descendants could hazard a guess.