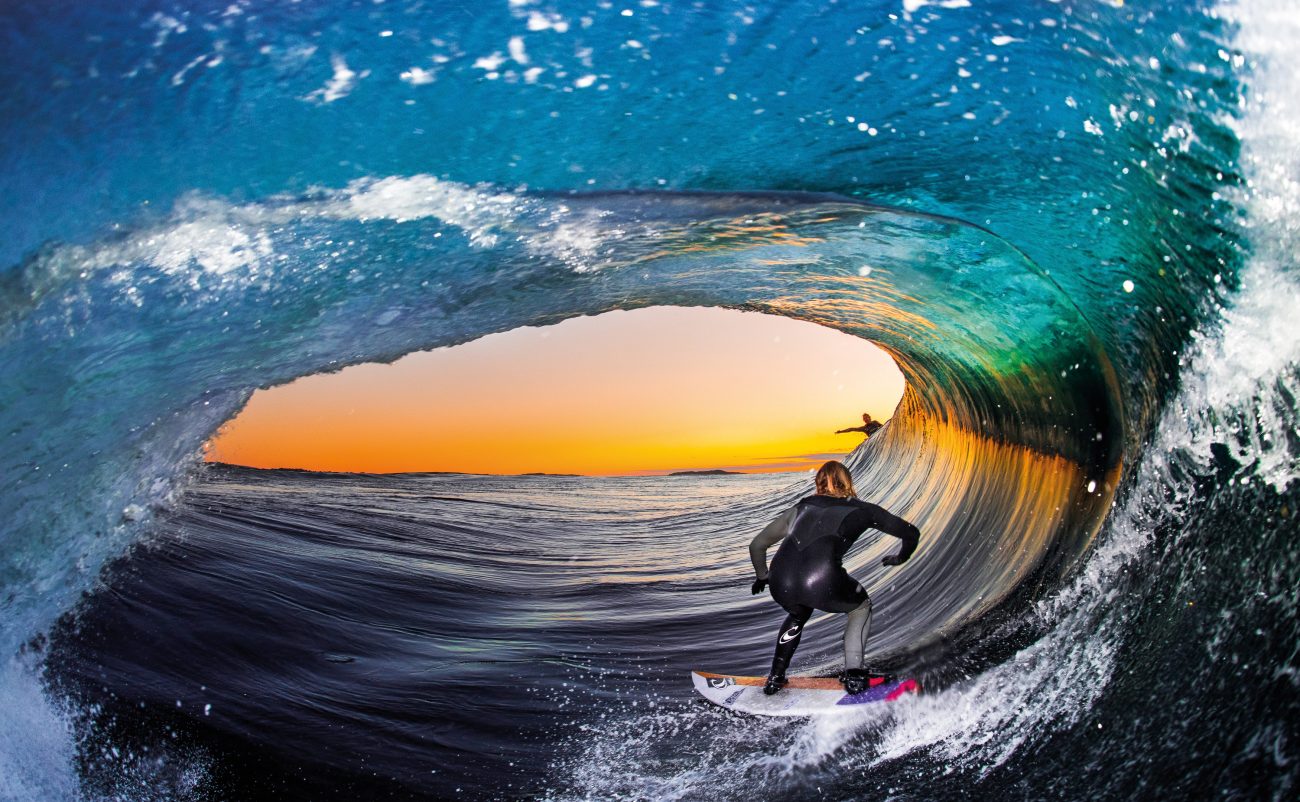 When I call Leroy Bellet, he’s shore-bound—he’d just torn the inside ligament on his left knee, another entry in his ledger of surfing injuries.

While most surf photographers shoot from the shore, or the rocks, or at best, from a longboard outside the barrel, Bellet is within the wave. To get the shot, he wipes out every time.

French photographer Laurent Pujol was hailed in 2015 as the first to shoot from within the wave, behind the surfer rather than in front of them. Bellet, 16, thought he’d give it a crack. He quickly discovered why Pujol had no other imitators. Surfers are towed into waves by jetskis, so Bellet simply added a second rope, keeping his distance from the surfer in front of him in case of mishaps. He rides into the wave, then hoists his 10 kilograms of camera, housing and speedlight—all while keeping his balance on the board. (It’s worth pointing out that Pujol is a former pro surfer.)

Bellet also added a flash, wanting to build on Pujol’s idea rather than imitate it. The speedlight allows him to shoot in low light, capturing the colours of sunrise and sunset as well as the texture of the wave curving over him.

It took Bellet and his team a whole winter to come up with a handful of shots.

“There have been a couple of people try it but no one has really got the images to work—with no water droplets in the frame,” he says. “I’ve got plenty of sequences that didn’t turn out.”

The trick was persistence. He estimates they caught between 200 to 300 waves to capture his portfolio of photographs.

After three hospital visits, including one especially brutal injury from hitting his head on his camera, he now wears a helmet and a padded vest: body armour designed for wakeboarders.

“I always have this little thing that I say to myself in my head: ‘Bad things to me mean good things for me’,” he told Surfing, one of the magazines to run his images on the cover. Others include Surfing Life, Surfing World, and 18seconds, plus spreads in several European newspapers. Bellet credits the images’ popularity to a behind-the-scenes GoPro video of him double-towing into the wave, shooting and wiping out, which made the rounds online.

Typically he shoots in the early morning, before school, off the coast of his hometown: Bawley Point, New South Wales. This year, he’s hoping to apply his technique to some of the world’s iconic waves. It’s likely that his next instalment of images will come from Tahiti, Indonesia—maybe even Mexico.