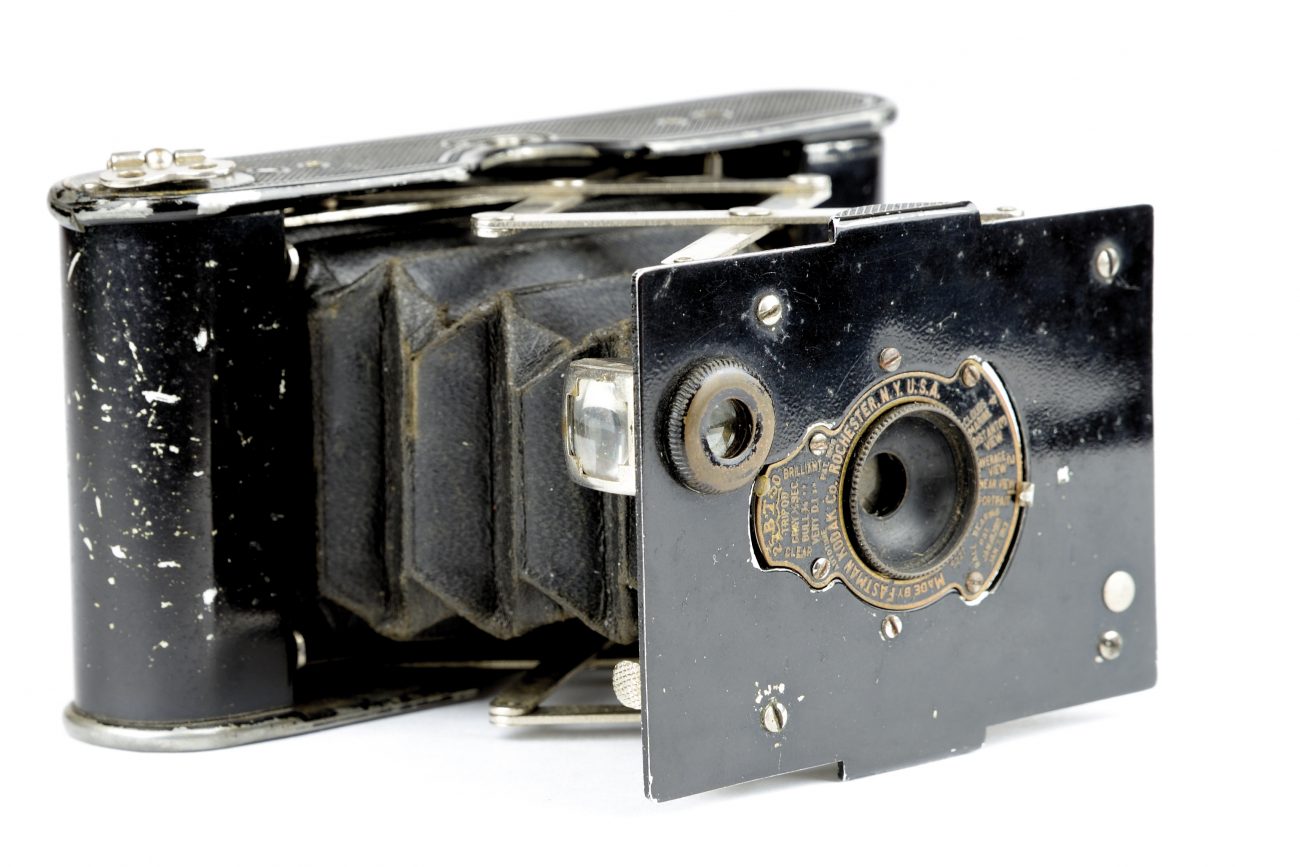 It was just one inch thick, comparable to today’s compact cameras, and its aluminium alloy body meant it was unusually cheap on its release in 1912.

The Vest Pocket Kodak was true to its name, “small enough to be carried in a waistcoat pocket without inconvenience,” noted an early review in The Amateur Photographer.

Opening the front of the camera revealed a folding bellows stabilised by trellis-shaped struts, and a short stand allowing the camera to rest vertically. Hidden behind the lens plate was a small brilliant finder, where the photographer could compose a tiny, upside-down image. It had a 75-millimetre meniscus lens with a minimum focal length of around two metres, and two shutter speeds, 1/25 and 1/50.

The first camera to use 127 film, its negatives were about the size of postage stamps. The whole thing weighed just over 300 grams.

“The biggest photographic advance in 20 years,” claimed a 1915 advertisement for Kodak Autographic film. “Any negative worth the making is worth a date and title…

When World War I broke out, the camera was widely marketed as ‘The Soldier’s Kodak’, with advertisements encouraging new recruits to “Make your own picture record of the war.”

Cameras were forbidden among the British and Commonwealth armed forces, but that didn’t stop many servicemen taking them to the front lines, and the Vest Pocket Kodak was the most popular choice. About 5500 VPKs were sold in Britain in 1914—a figure that more than quintupled to 28,000 the following year.

In 1915, Kodak brought a unique innovation to the camera with the introduction of ‘autographic’ film. Patented by American inventor Henry Jacques Gaisman (also responsible for the safety razor) and acquired by George Eastman for US $300,000, autographic film had tissue-thin carbon paper between the film and its paper backing. This allowed photographers to write a short caption on the negative between exposures, so Vest Pocket models were adapted to incorporate a small hinged door in the back of the camera, and an iron stylus that clipped to the body.

“The biggest photographic advance in 20 years,” claimed a 1915 advertisement for Kodak Autographic film. “Any negative worth the making is worth a date and title…
“The occasion or place, interesting facts about the children, the stop, exposure and date, a friend’s autograph under his portrait—that’s the sort of thing that makes the autographic record so valuable for the future.”

Nearly two million Vest Pocket Kodaks were sold between 1912 and 1926—and much of the surviving photographic record of World War I from Western soldiers’ point of view is thanks to the Vest Pocket Kodak—but autographic film never became as popular as George Eastman hoped, and was discontinued in 1932.