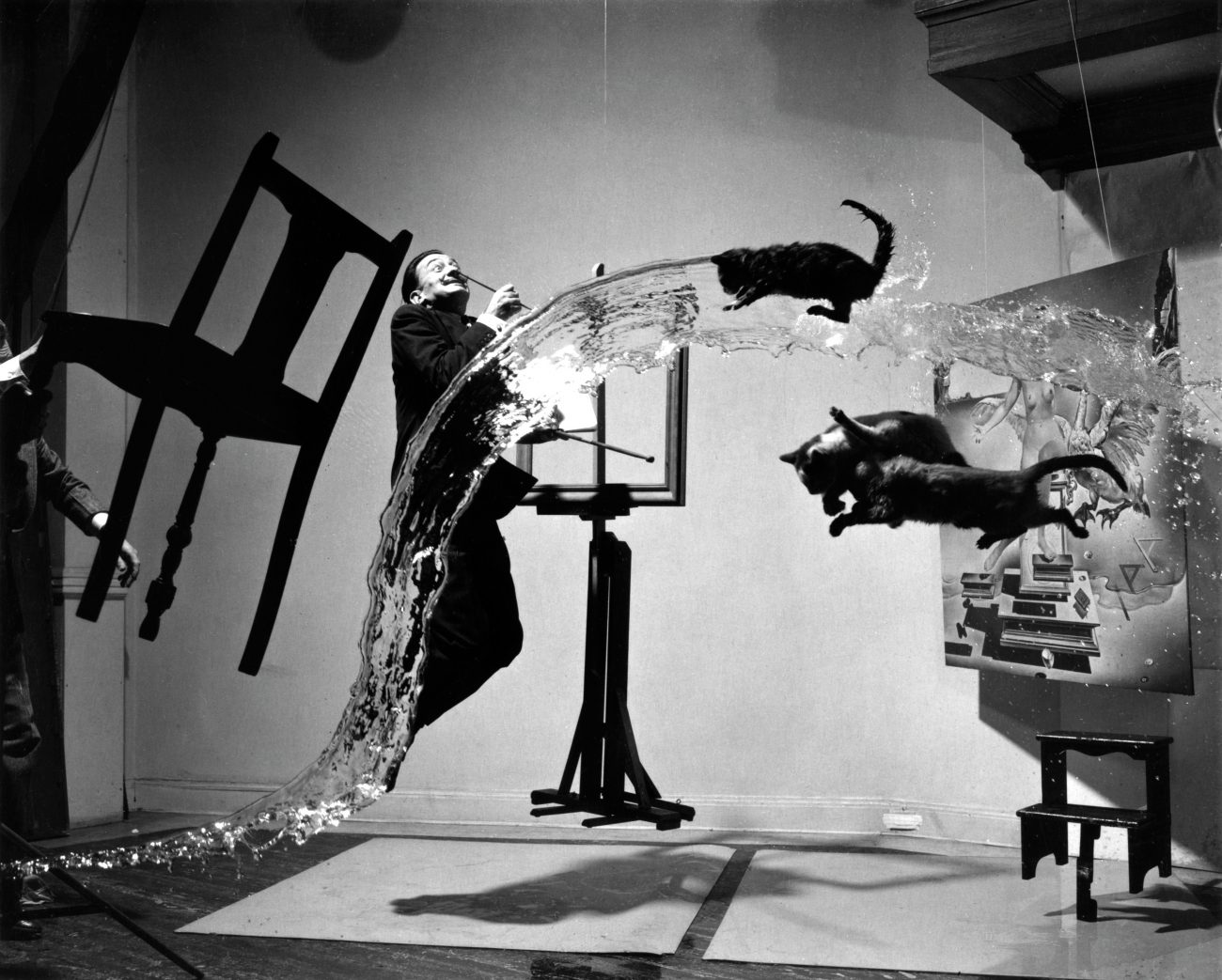 How do you photograph particle physics? With the world’s most famous surrealist in the frame, to boot? Even today, with Photoshop, that would be a tough brief, but Philippe Halsman nailed it on film in 1948, with a 4 x 5 twin-lens reflex. At least, he nailed it after 28 goes, processing the single-sheet film between each attempt. Halsman met Salvador Dalí in Paris in 1941, and they became friends and collaborators. Dalí began work on his painting ‘Leda Atomica’ in 1947, after physicists had revealed that all matter hangs in a “suspended” state. Halsman knew he had to photograph the artist in that very context—an homage to the atomic age.

The masterpiece itself, then unfinished, features at right. It seems to float, as does everything in the shot, including Dalí. It is a set sans gravity. Halsman asked many of his celebrity subjects to leap: he believed it captured a fleeting, authentic essence:

“When you ask a person to jump, his attention is mostly directed toward the act of jumping and the mask falls so that the real person appears.”

Everything in the picture is held up by something or someone, except for the cats, which were hurled by three assistants on count of three (humane treatment compared to Halsman’s original idea, which was to blow one up). Out-takes show that Halsman at least had the cats on rotation, so that no single animal got thrown 28 times.

Dalí had to wait between each take while Halsman went and processed the film. Meanwhile, the assistants mopped up the mess, refilled the bucket and wrangled fresh cats. Twenty-seven times, Halsman emerged to announce that something had gone wrong: he later published some of the out-takes—a bloopers series—and they show that random chance is both the bane and beauty of photography. In one, a cat obscures Dalí’s face. In two others, the bucket of water actually hits Dalí (Halsman originally wanted to use milk, but it seemed too wasteful in an era of post-war food shortages). In another frame, Dalí jumped too late, when the cats were already outstretched for landing. In another, an assistant had wandered into an otherwise-perfect shot.

Then, after six gruelling hours, Halsman finally saw the money shot come up in the dish. “The result satisfied my striving for perfection… My assistants and I were wet, dirty, and near complete exhaustion—only the cats still looked like new.”

Then he went to work, touching out the wires that suspended the easel and the painting, the hand of his wife Yvonne holding the chair and the prop holding up the footstool. An assistant made a gelatin silver print, copies of which hang today in modern galleries around the world.

Perhaps most remarkable is that Dalí and Halsman’s friendship survived the ordeal. They went on to collaborate for another 37 years—a standout work was the photographic book Dalí’s Mustache—two remarkable talents creating a powerful creative composite, just like ‘Dalí Atomicus’ itself.