Dutch photographer Ingetje Tadros is recounting her first visit to the Mallingbar community, an Aboriginal enclave in Broome, Western Australia.

Broome is a tourist destination known for its pristine beaches and expensive resorts, but at Kennedy Hill, minutes from the centre of town, Aboriginal families live in very different conditions. A number of houses have already been demolished or condemned by authorities, and the future of the community hangs in limbo.

Tadros has been documenting the community for four years, since moving to Broome.

“I have always been appalled by the way Aboriginal people were treated. It disturbed and disgusted me, so I decided to have a closer look and started mingling with them.”

At first she approached Aboriginal groups living in bush camps in the wilderness of the Kimberley, taking portraits or sitting around talking.

“I’d always give prints to those I photographed and was always greeted with a smile,” she says. As she gained their trust she was invited in further to photograph weddings, funerals and intimate family moments.

But at Kennedy Hill the vibe was different, the residents suspicious of outsiders and their intentions.

“I walked in and asked them who was the boss,” says Tadros. “I talked to them about what I’d been doing and what I wanted to do and slowly I built up a rapport and relationship.”

The boss turned out to be elder Roy Wiggan, who came to think of Tadros as “a messenger”, and brought her into the community.

As months became years, Tadros built a library of images that captured life at Kennedy Hill, the good and the bad. The more she integrated, the more community members allowed her to photograph personal moments.

“You have to be aware of your environment and take it slowly,” she says. “I asked them one time ‘How come you always let me in?’ They said, ‘Last week there was this guy with a big lens at the fence and he was making photos over the fence and we chased him all the way back to his car. We don’t chase you because you always sit with us and you always ask to make photos’.”

Tadros is a relative newcomer to professional photography, although she’s taken photographs all her life. Her Kennedy Hill work, which now spans five years, has drawn international focus to the community and given her an entrée into the world of photography festivals and awards. 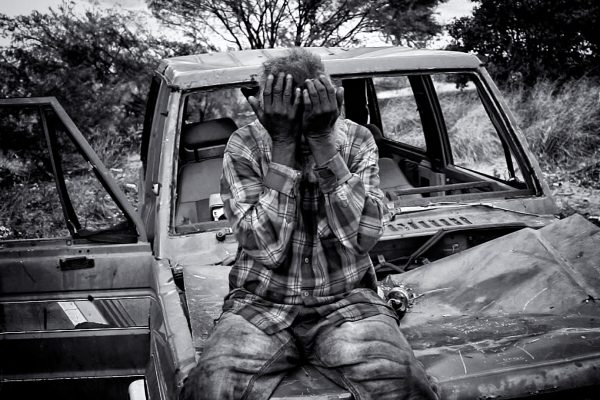 In 2015, she picked up the prestigious Australian Walkley Award for Excellence in Photojournalism, and in 2016, the Prix Ani at Visa Pour l’Image. But it’s not just a matter of right place, right time or even right subject.

Tadros has invested heavily in her photography recently, attending workshops to hone her skills. She presents a powerful combination of talent, guts and a formidable determination to get her work out there.

Even though she now has a solid body of work on Kennedy Hill—which was recently published in a book, This is My Country—the story isn’t over for Tadros, who visits the community most days when she’s in Broome.

This is My Country is published by FotoEvidence.