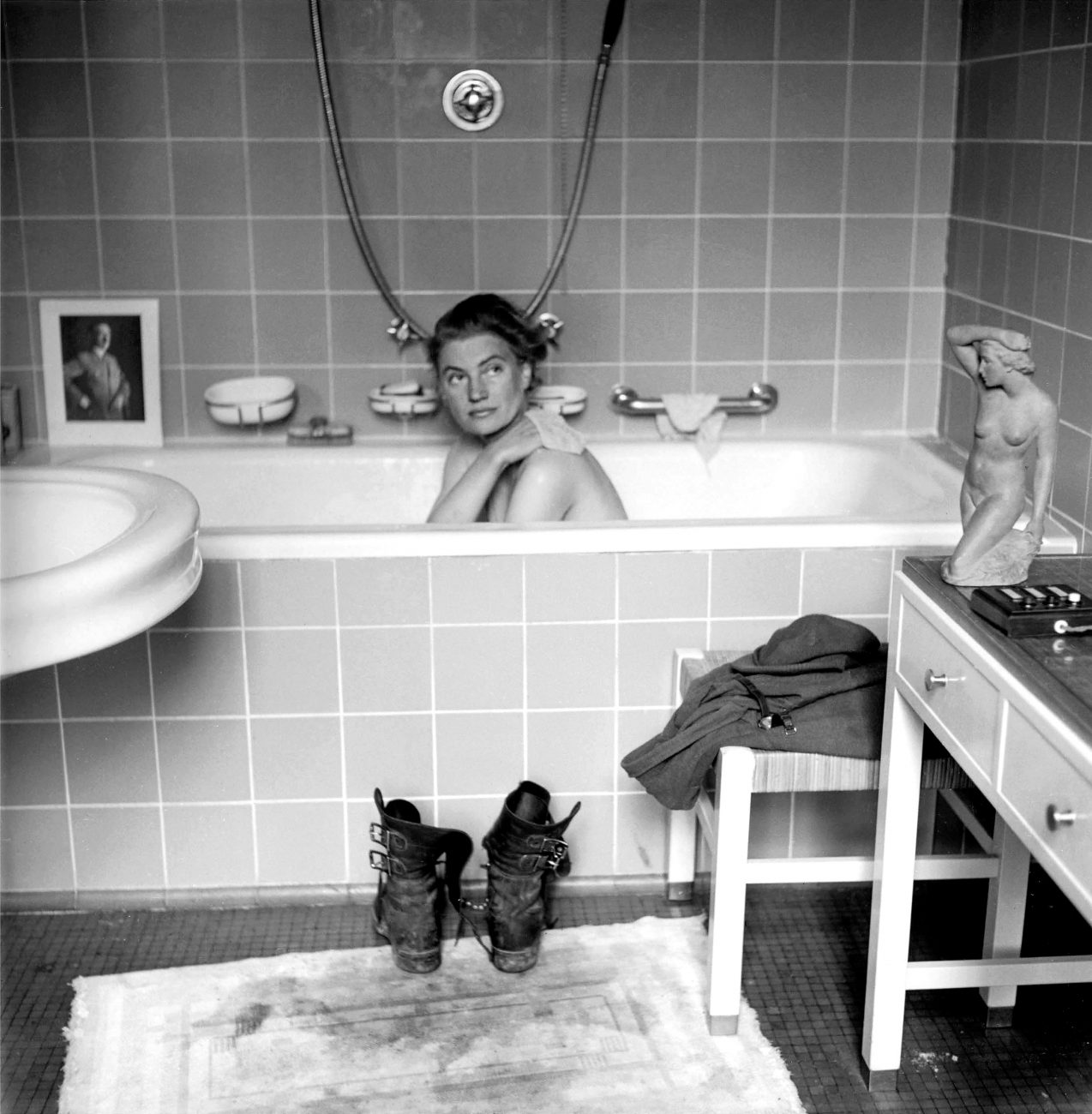 For wartime, it’s a pretty flash bathroom. Just the same, it looks remarkably unadorned save for a kitschy statuette. The woman in the tub has at once no right to be there—and every right. The apartment’s owner had committed suicide only that morning—April 30, 1945. There’s a photograph of him incongruously propped beside the soap dish. It’s Adolf Hitler. On the bath mat, a pair of heavy boots have left it filthy with dirt. It’s the stain of death and suffering—the mud of Dachau concentration camp—and in Hitler’s tub, Lee Miller might be trying to wash it from her soul.

This picture, taken by her friend and sometime lover David Scherman (they then swapped places for another photo), says a lot about Elizabeth ‘Lee’ Miller. As a war photographer (one of just four United States-accredited women) first for Vogue and later for Condé Nast Publishing, she carved a career, and a reputation, out of putting herself at front and centre. She was in London when the Luftwaffe tried to bomb it flat. When an accreditation cock-up mistakenly granted her access to the American assault on St Malo in the weeks following the Normandy invasion, she captured the epic violence of the front line, shooting in a helmet specially modified to leave room for a viewfinder. She documented the first operational use of napalm. She was there when American tanks rolled down the Champs Elysées. She documented the evil of Buchenwald and later, Dachau—the only female photographer to do so. Nearby, she photographed a train, going nowhere, brimming with thousands of corpses. Then she and Scherman left, “gulping” as biographer Carolyn Burke records it, “for air and violence”.

The pair made their way to Munich, which was about to fall to the US 45th Division, to 16 Prinzregentenplatz, where Miller looked over the Führer’s art collection. She and Scherman hadn’t washed in weeks.

Whose idea was it to record the moment? That detail has been lost. But Miller’s famous portrait says something else about her: she’s naked—again. As a child in upstate New York, she had modelled nude for her father Theodore, himself a photographer. According to Burke, “Theodore relished the opportunity to do as many nude studies as he could schedule’,” including images of Lee lying naked on her bed with other young models in stereoscopic images Burke describes as stopping “just short of lesbian sex”. She went on to work as a chorus girl in an erotic revue, and as a lingerie model on Fifth Avenue. In 1927, she stepped absent-mindedly off a kerb into Manhattan traffic. The hand that stopped her was that of publishing magnate Condé Montrose Nast, owner of Vogue.

She modelled, and variously took pictures, an interest in surrealism, and a who’s who of lovers—Charlie Chaplin, Man Ray (some of the works credited to Ray were actually shot by Miller) and, probably, Pablo Picasso. In 1939, she went to London to work as a studio assistant for British Vogue, but quickly picked up a camera. Her reportage made her famous, but by war’s end she could hardly bear the weight of her experience. She went on for a time, photographing dying children in a Vienna Hospital, peasant life in post-war Hungary and finally, the execution of Prime Minister László Bárdossy. On her return to England in 1946, she married, settled in a Sussex farmhouse, and had a son. Crippled by depression and alcoholism, she lost all interest in photography, putting her life’s work in the attic, never to look at it again.