Tamron has set its sights upon becoming the class leader. Its new 15-30mm f/2.8 lens has both the maximum aperture of the Nikkor and the image stabilisation of the Canon—the first lens to achieve these specifications. It is designed to compete optically with the excellence of the Nikkor, with great sharpness wide-open along with contrast that exceeds that of both the Nikkor and Canon.

It has superior flare resistance due to Tamron’s proprietary eBAND (Extended Bandwidth & Angular-Dependency) and new generation BBAR (Broad-Band Anti-Reflection) Coatings, which have been optimised for ultra-wide angles of view. Tamron’s unique XGM (eXpanded Glass Molded Aspherical) and LD (Low Dispersion) lens elements effectively control aberrations and enhance sharpness. The front element is coated in fluorine (like many of Canon’s recent high-end lenses) to repel water, oil from fingerprints, and other dirt and dust from the front element.

Its nine-bladed rounded aperture iris allows circular highlights to stay round even when stopped down. The bokeh from the lens is quite nice, although wide-angle lenses by nature allow for fewer scenarios where one can diffuse a background. Still, at the 30mm end I found a lot of opportunities to create surprisingly nice background blur.

The optical formula is fairly complex, with 18 elements in 13 groups. This allows for very close focus (28cm)—similar to the Canon and Nikkor—and its maximum magnification falls between the two of them. But this is not the Tamron’s killer attribute; that would be its vibration compensation (VC). 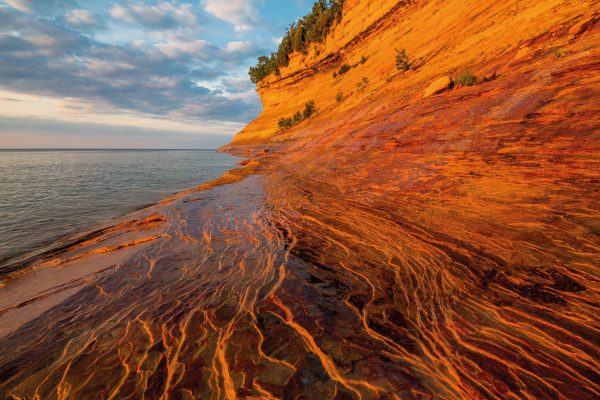 Some photographers use a tripod all the time; I rarely use one. This lens allows for very low shutter speeds because of its wider focal length, making it possible to shoot handheld at one or two seconds. This is valuable when the light is fading but a smaller aperture is desired for greater depth of field.

My experience with Tamron’s Ultrasonic Drive (USD) is mostly positive. I’ve used five lenses with Tamron’s USD, and have found that they are very quiet, fast—but not quite as fast as the best from Canon and Nikon—and most importantly, very accurate. There sometimes seems to be a split second lag before the elements start moving, but once the motor spools up, focus is both quick and accurate.

Wide-angle lenses are most often used by landscape photographers and wedding or event photographers needing to work in lower-light conditions. The Tamron’s wide aperture and VC will benefit all disciplines, moreover, it is perfectly sharp wide open, making it an equally good choice for capturing portraits or events.