When beards and waxed moustaches started to appear on dapper men around London, Amit Amin and Naroop Jhooti were surprised and amused. Extravagant facial hair, something they strongly identified with their Punjabi heritage, had hit mainstream fashion. For the world’s 30 million Sikhs, letting hair grow long carries deep religious significance; it’s a sign of respect for God’s creation.

For advertising photographers Amin and Jhooti, it was a sign that the inspiration they’d been seeking for their personal work lay within their own community. They embarked on an 18-month search for British-Sikh men with distinctive personal style for a series of portraits they dubbed The Singh Project (Singh being an extremely common name among Sikhs).

At first, getting likely subjects into the studio was a challenge. “When we approached people, the first thing they’d ask was, ‘Why do people want to see a bunch of Sikh men? What’s the appeal?'” says Jhooti. Once a few portraits were complete, the pair carried iPads so they could show off the series. After that it was easy. Well, sort of. “It’s actually quite difficult to get 36 men in a beard and turban who look different,” says Jhooti. He has seen too many series where the volume of images dilutes the subject. “You don’t want just anybody, but someone who is going to add value, who has a different look. When you view them as a collection of images, you don’t want to be bored by them.”

Many portraits were cut. The duo photographed ten children, but only one appears in the final line-up: five-year-old Gurjeevan Singh Plahe. He’s unique because he wears a turban rather than the stocking-like head covering usually sported by boys. The 35 other men in the project are drawn from all walks of life. There’s a temple volunteer in his 90s, a doctor, a fashion stylist, an art director, a magician and a Scottish-Sikh comedian. Some wear traditional costume and brandish the kirpan (a ceremonial dagger), others wear their beard and turban above contemporary dress. 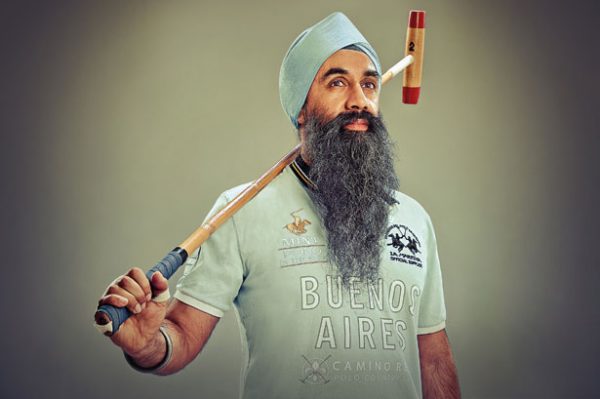 Amin and Jhooti’s perfectionism paid off: each image brings a new character to life and communicates a different emotion. The repetitive, tightly controlled appearance of the series further draws attention to the individuality of each Singh subject. “The hardest part was balancing the look of each image,” says Jhooti. “There’s a whole process to get them exactly matching. If we were shooting people on different backgrounds and in different places that would have been a lot easier.”

It wasn’t just a matter of dragging and dropping Lightroom settings from one photograph to the next, he says. “Even with the same lighting set-up the exposures could be a few stops different each time.”

Amin and Jhooti have clearly defined roles in their working relationship: Amin’s the chatty one behind the camera while Jhooti works behind the scenes, designing lighting and retouching. Jhooti spent a lot of time on finding a unique background hue and bringing out detail in the subjects’ eyes, knowing they would be the point of connection with the viewer.

Exhibiting The Singh Project was always the plan. Once all 36 images were complete, Amin and Jhooti started a Kickstarter to raise money for a London exhibition. It took one blog reposting the series before the rest of the internet, and eventually traditional media, followed suit. The images appeared in GQ, The Guardian, The Huffington Post, The Telegraph and The Independent, on Buzzfeed and Petapixel, and the pair were interviewed live on the BBC. Their Kickstarter exceeded its goal by £3000, and the exhibition opened in November 2014. It was so crowded at the preview, says Jhooti, that the gallery steamed up and he had to walk around with a cloth wiping condensation off the prints. 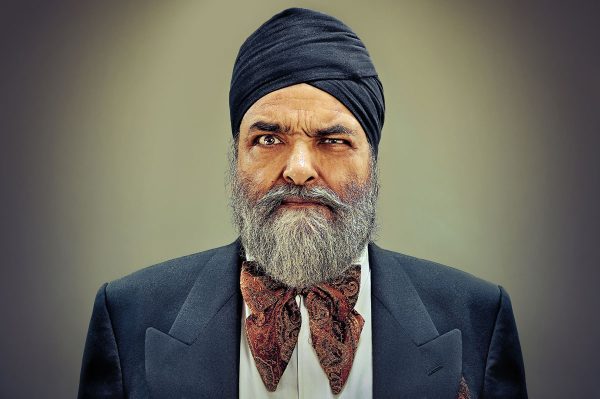 Next, they hope to take The Singh Project to New York City, but it’s a matter of sponsorship. Exhibitions are deceptively expensive—as well as printing and transport costs, there’s setting up the gallery, getting transfers put on walls, corralling media. “You need to get a PR and press team on board—a lot of people underestimate the importance of press,” says Jhooti. “You want people to actually come to the show.”

“All our personal projects are based on that. That’s quite a rare thing to be able to do.”

Amin and Jhooti got that part right, too. Clients old and new walked up and booked them at the exhibition. “We’ve had meetings with a lot of ad agencies because they like the fact we work with real people,” says Jhooti. “All our personal projects are based on that. That’s quite a rare thing to be able to do.”

Jhooti says The Singh Project is not a “cool” project, but a “credible” one: it’s formal and traditional, considered and refined. It’s a demonstration of their technique and relatibility. But their next project is a cool one, he adds. It’s also about hair and identity, and they’ve already started shooting. It’s called Dreads.

Jhooti says they’re always encouraging young photographers to find a project that’s a reflection of themselves. Personal projects are how you advertise yourself to clients, says Jhooti, and should clearly communicate your own identity. “Clients want to see something that shows depth, has a big scope, something that is engaging and unique. Ultimately it’s you they’re buying into.”