The motorcycle racers all did the same pose at first, the classic one: helmet on hip, bike displayed behind them, staring down the barrel of the camera with a grin. Brook Ready let them do it, and then he started to reposition each person. Look over here, he’d say—off to the side, into the distance, like an explorer of yesteryear.

It was February, the temperature was in the early 40s, and Ready was at Speed Week on Lake Gairdner, a 160-kilometre-long dry basin in South Australia. The lake is eight hours’ drive north-west of Adelaide, three of them on dirt roads, two from the last cellphone signal. “It’s like Mars—hot, dusty, and glaringly bright,” says Ready. Some people wore two pairs of sunglasses, one on top of the other.

Ready had planned to shoot portraits at Bonneville, Utah—that iconic salt-flat race—but Speed Week there had been cancelled two years’ running due to bad weather. Searching online, he came across Lake Gairdner. With little information available online, Ready was surprised by the scale of the event on arrival. “It’s probably the second-biggest one out there,” he says. “It’s in the middle of nowhere, and it’s not really publicised as majorly as it should be.”

Ready was angling for a rebrand. He’d been assisting photographers in Auckland for more than six years, and though it had been a tough gig to break into—he’d worked for free for six months at the start—he was now making good money. The prospect of turning down solid work in order to pursue projects and clients of his own wasn’t appealing. Until he reached a tipping point. But first, he needed a new portfolio—one that was entirely his own.

Ready loves portraits, the kind where the subject is embraced by his or her environment. He planned his Speed Week pictures in advance, practising with friends posed astride bicycles to determine an angle and perspective, with just enough background in the frame, using a 35-millimetre prime: the medium-format look without the expensive camera. 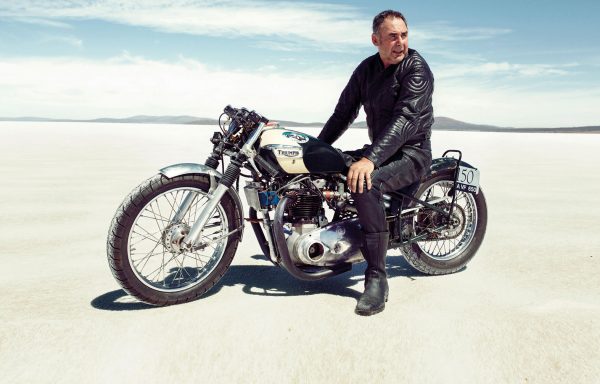 On Lake Gairdner, however, the glare was too bright for Ready to check whether or not he’d got the shot. “When I looked back at the shots, day one was a frantic grab at everything—I had to have a conversation with myself that night and re-plan it in my head,” he says. “I made better progress on day two with the portraits.”

He spent the five days of Speed Week trying to make his portrait subjects stop smiling. “People want to stand and smile for photos,” he laughs. “It’s conditioned into us. But no one looks like that normally. No one walks around with a big smile on their face. It’s about trying to relax them into a moment where there’s a little more vulnerability and reality to it. You’ll work someone into it—and then you’ll start over from scratch with the next person.”

At the end of the week, Ready shot portraits of the race team from Melbourne that he’d spent the most time with, patiently waiting for them to drop their awkward smiles and for quieter expressions to emerge. It was worth it. When Ready showed them the pictures, one of them told him, “It’s the most genuine photo of me I’ve ever seen.”