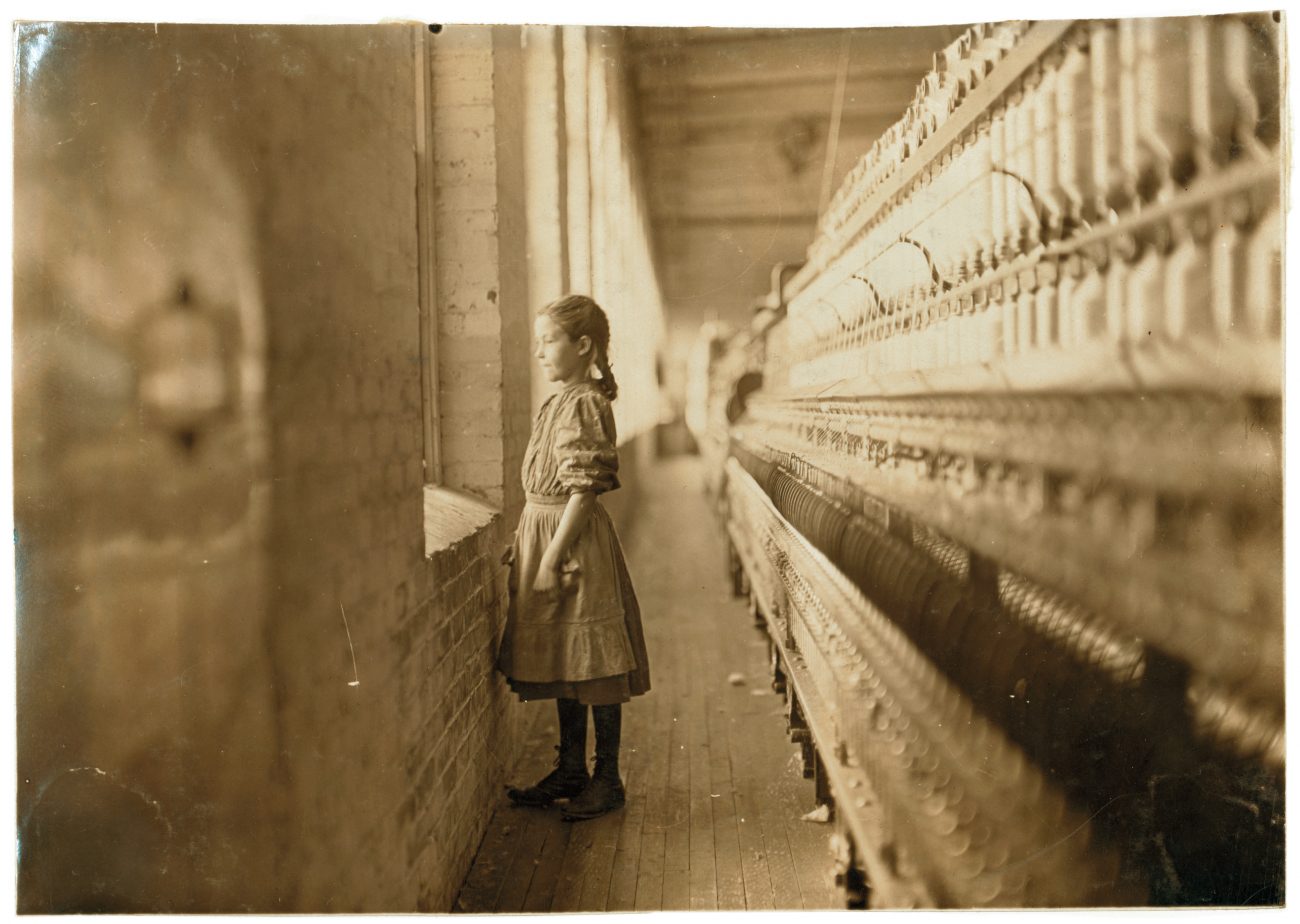 This column is dedicated to the durability of photographs—pictures which get frozen in ice, lost in a museum vault or devoured by an alligator, only to turn up months, decades, even half a century later to bear testament to a moment long forgotten. Sometimes it’s not the picture that’s been forgotten, but the subject. In the case of Lalar Blanton, America misplaced an entire era of social history.

Among the vast collections held by the US Library of Congress is the work of Lewis Hine, arguably the father of social documentary photography. He used his camera for social reform, focusing on industry, and in particular, documenting the abuses of child labour laws.

In 1908 he visited Rhodes Manufacturing Co, a cotton mill in Lincolnton, North Carolina, and took a photograph of a 10-year-old girl looking through a factory window. She wears a knee-length dress with a laced pinafore, her hair tied back neatly. Behind her is a spinning frame, the ‘sides’ stacked high with the fruit of her labours—thousands of reels of cotton. In front of her, Hine employs the oldest photographer’s trick in the book; a window, which gives fabulously diffuse light on the subject and a visual prospect to engage both the child and the viewer’s eye. (Given the technology of the day, the volume of light flooding through the fenestration would have made Hine’s exposure considerably shorter than in the darker factory; a technical aspect he would likely have considered valuable when making a portrait of a child.)

While most of Hine’s images were annotated with the name of the subject, this girl was identified only as a ‘spinner’. The image is among Hine’s best known and was made for the National Child Labor Committee where he worked for more than a decade, travelling the country documenting children at work in sweatshops, coal mines, factories, and on farms. The work ultimately swayed public opinion and led to the 1938 Fair Labor Standards Act, which set minimum ages of employment and hours of work for children. But while the picture became famous, the girl remained anonymous for more than 100 years.

In 2008, author and historian Joe Manning began a forensic search for the girl’s identity. He scoured the 1910 Lincolnton census for white girls born around 1898 who had a sister two years older. (The girl was also pictured with her older sister and a woman—presumably their mother—in another print from the same cotton mill.) Manning narrowed the identity of the girl down to just a dozen names, posted the names under the picture on his website… and waited.

Meanwhile, a grand-daughter of one the mill workers, Myra Cook of Louisville, Kentucky, had been searching for her grandmother’s name on the internet for four years. Suddenly, Manning’s website appeared. She identified her grandmother, Lalar Blanton, her great grandmother and great aunt.

“It made me feel sad for my grandmother,” Cook told Joe DePriest, a journalist with the Charlotte Observer. “ But it also makes me feel really proud. She’s a big part of American history.”

The enactment of child labour laws were an enormous leap toward the civil society now cherished by Americans and promoted the world over says Robert Allen, professor of American Studies at the University of North Carolina. “It’s so foreign to us today. The photos bring a shock of recognition that these children are all part of our history.”

Cook recalls her grandmother as kind, generous, but also feisty and tough, and very protective of children. “She was determined I would never be looking out a window like that in the same situation.”