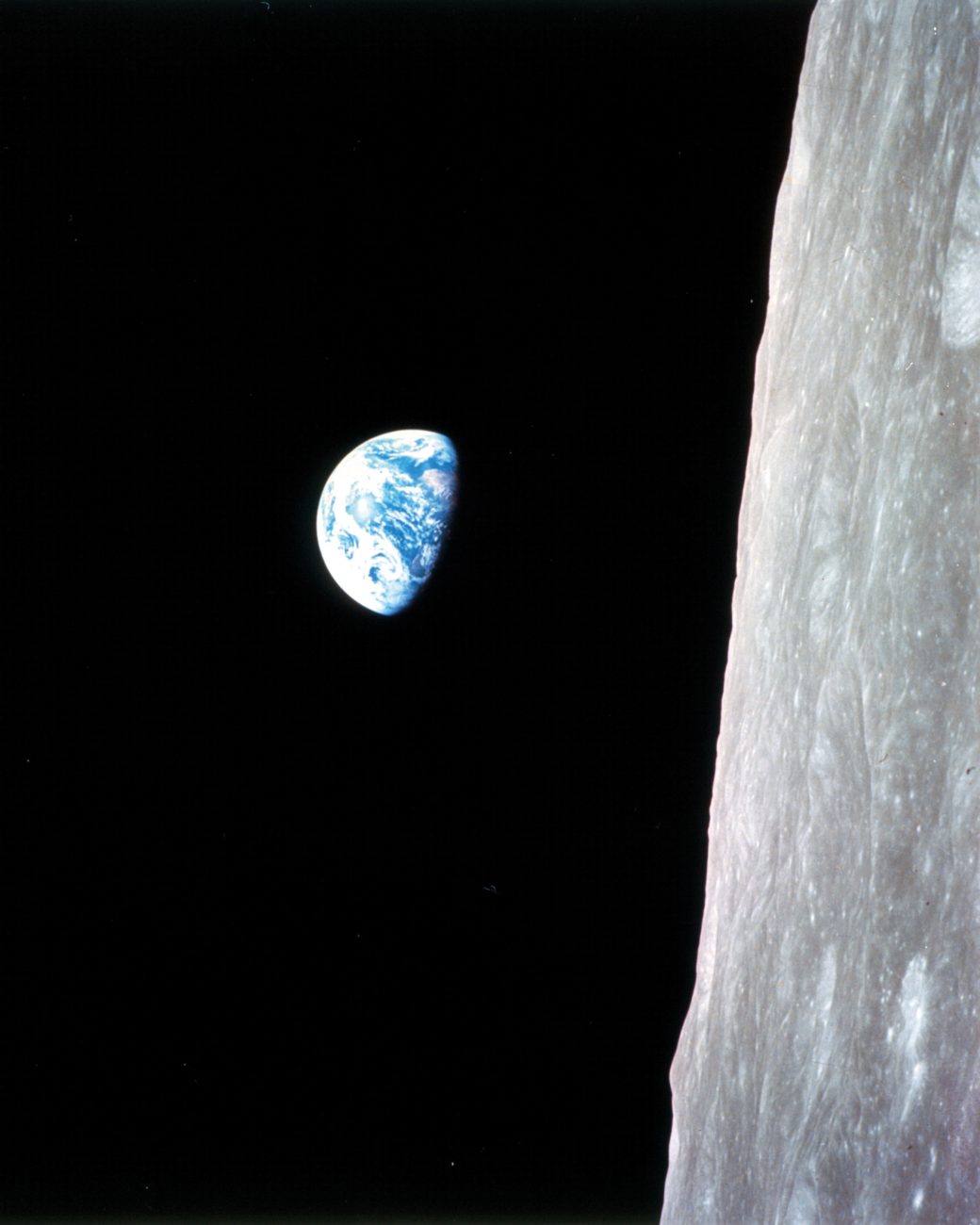 Nobody authorised the taking of NASA photograph AS8-14-2383. In fact, if it weren’t for a quirk of astrophysics, it wouldn’t have been taken at all. By rights, the Earth should never ‘rise’ above the moon’s surface, because our tidal pull clinches the moon in a tight embrace—the two should always hold the same relative position. Luckily for astronaut Bill Anders, the moon in reality tends to wobble a little, giving the world on that Christmas Eve, 1968, a remarkable gift—its first self-portrait.

Unlike moonrises down here, Earthrises happen slowly on the moon; they can take 48 hours. Just the same, the crew of Apollo 8—lunar module pilot Anders, crew commander Frank Borman and command module pilot Jim Lovell—were lucky to witness it. The craft had already drifted past the spectacle three times, but none of its windows were facing the right way—the crew’s job instead was to photograph the lunar surface, casing potential landing sites for subsequent missions. Then, toward the end of its fourth orbit, Borman started to roll Apollo clear of the moon to gain radio comms with Houston. As he looked down to the lunar horizon for reference, he caught a famous, captivating glimpse. “Oh my God, look at that picture over there!” the comms transcript reads. “There’s the Earth coming up. Wow, is that pretty!” (Incidentally, the crew, being the first manned lunar mission, were also the first humans to see the far side of the moon as well).

The ‘Earthrise’ shot wasn’t on the mission schedule, but the crew scrambled for their cameras. They were issued with highly modified Hasselblad 500 ELs, fitted with motor drives. Borman, in the left-hand seat, shot a frame on black and white, the first image ever shot of our planet from space, then called for roll of Ektachrome. Meanwhile, Anders levelled his own camera, loaded with 70mm colour, lining up the blue planet through a simple sighting frame.

Jim Lovell shot another, at 250th of a second at f/11. “Oh man, that’s great!” we can still hear him say on the mission recordings. Then Anders took another two pictures, trying different exposures. Frank Borman has always claimed that he took the famous shot: “One of the most famous pictures in photographic history, taken after I grabbed the camera away from Bill Anders.” NASA nevertheless attributes it to Anders.

The image is almost always run landscape, much as we would appreciate a sunrise here on Earth. But in fact, the crew witnessed it as a vertical. And that’s how Anders shot it—the Poles are where they should be—but Borman left his camera horizontal.

The crew gave a live broadcast that night, transmitting footage of the Earth and moon as seen from their spacecraft. Lovell spoke: “The vast loneliness is awe-inspiring, and it makes you realise just what you have back there on Earth.” It was a prescient insight: the late Galen Rowell, one of the most accomplished nature photographers ever, called Anders’ picture “the most influential environmental photograph ever taken”. For the first time, earthlings could appreciate just how lonely, how fragile, how self-contained, was our planet. We only then appreciated, too, the utter preponderance of water, and its crucial role. Life magazine gave the shot a spread in its book 100 Photographs that Changed the World.

Borman claimed credit too, for the image that became a famous US Postal Service stamp, but the cloud formations in the two men’s photographs are different, and those on the stamp match Anders’ image. Recalling the opening lines of a reading during that Christmas Eve broadcast from space, the stamp carries the words from Genesis: “In the beginning, God…”