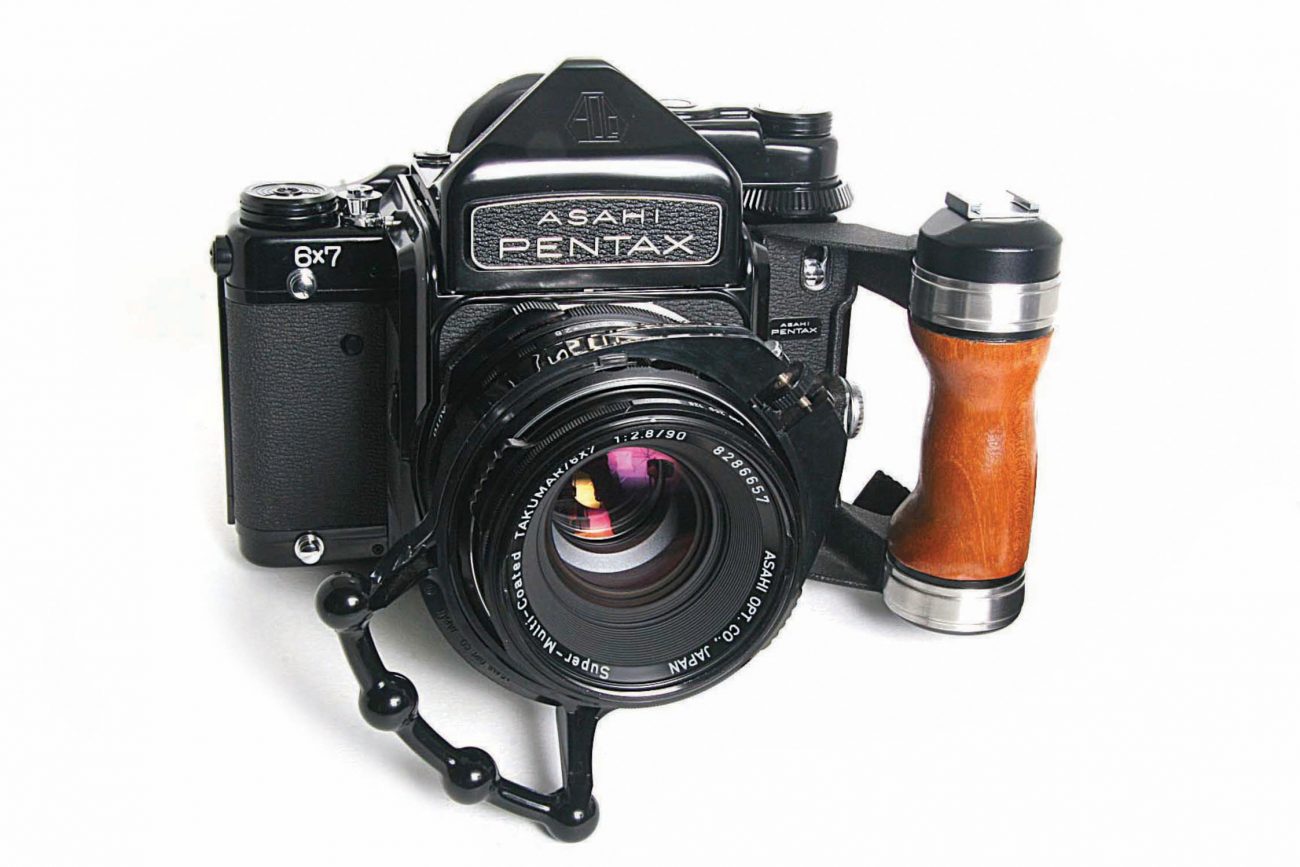 The behemoth medium-format camera and its descendants have been the choice of photography greats since its 1969.

“It will change things,” wrote Diane Arbus in the early 1970s. “I am awkward with it at first, but it’s very thrilling. Nobody understands but me what a difference it might make.”

She had borrowed a Pentax 6×7 from the photographer Hiro, and she was in love. She called it “a camera discovered in Wonderland by Alice, or brandished by a circus clown who pops a bird out of it instead of a picture”.

It was a “marvellous shape”, she said, and she wanted one so much that she offered to teach a class in order to raise the money necessary to buy one. It had a waist-level viewfinder, which allowed Arbus to photograph people on the street surreptitiously, and her work shifted from posed images to stealthy, anonymous shots. It became the primary camera of her career.

The Pentax 6×7 has been described as a tank, a battleship, as Darth Vader. This is due to its size, its glossy, all-black finish, and the fact that it weighs close to two kilograms with a standard 105-millimetre lens attached. The sound of its shutter release is “a thunderclap”, wrote one photographer online. “A cannon”, added another.

Launched in 1969 by Asahi Pentax, the 6×7 is in the style of a 35-millimetre camera—except everything is twice the size. Asahi planned to lure people away from the dominant camera format of the day: “The familiar convenience of a 35-millimetre SLR scaled up to the ideal size,” boasted a Pentax advertisement in 1973.

A standard Pentax 6×7 kit would include a non-metered pentaprism and a Super Takumar 105mm f/2.4 lens. The range of compatible lenses grew to more than 30, there were a number of interchangeable viewfinders, including the waist-level one favoured by Arbus, and Pentax even made a marine housing for it.

Its name, the 6×7, is actually a slight exaggeration—it produces negatives 55 by 70 millimetres in size, on 120 or 220 medium-format film.

The camera racked up a series of notable devotees, especially in the fashion world. Steven Meisel, Patrick Demarchelier, Peter Lindbergh and Helmut Newton all shot on one, or its 1989 successor, the Pentax 67. (In 1998, it was updated one final time, to the 67II).

Mario Testino used one to shoot the last official portraits of Diana, Princess of Wales, in 1997. The American fine-art photographer Todd Hido has been devoted to the camera for decades: “I’m often literally hunched over in the car, with my huge Pentax 6×7, photographing through the window,” he said in an interview, then added: “At the end of the day, my back seriously hurts.”

The camera has its limitations—it can only be handheld in decent light or with fast film, and it requires a tripod at least double its weight, as the manual reminds users, to avoid blurry shots.

But it remains the tool of choice for a multitude of photographers today, especially in fine art, astrophotography—it can be easily mounted to a telescope—and fashion.

It has the quality and detail to stand up to commercial assignments, as well as something that modern cameras don’t have: the romance of film. “There’s nothing more exciting than those 24-48 hours between the shoot and the contact sheet,” says London-based fashion photographer and 6×7 shooter Matteo Montanari, who has produced work for Gucci, Calvin Klein, Chloé and several editions of Vogue.

“It’s a mix of anxiety and butterflies and fear and excitement. You always think you might have f*cked up big time or maybe you took some great shots. You have a feeling but you don’t know for sure. It’s like when you are on your way to the airport to pick up someone you love that you haven’t seen in a while.”