The mirrorless camera market is a lot more crowded since the E-M5 was released a few years ago. To ensure the new E-M5 Mark II is one of the best cameras available, it comes with a swathe of new features as well as all the greatest hits of the original E-M5 and flagship E-M1: a 40MP high-resolution mode, a much-improved video mode, and many other refinements. The result is a polished and versatile camera capable of delivering high-quality stills and video—while being small enough to carry with you all the time.

It’s a beautiful camera, too, continuing the characteristic old-fashioned look. The main grip has been redesigned to give better support and it feels more secure when I’m holding the camera with one hand. The retro-style grip is smaller than most, but those who find it uncomfortable could add the HLD-8G Power Adaptor Grip accessory.

The body is weather-sealed, and well-made. The touchscreen and electronic viewfinder have both been updated to match the flagship E-M1, plus the touchscreen is now fully articulated, which makes shooting from extreme angles a lot easier.

The E-M5 Mark II’s image sensor resolution remains unchanged at 16MP, but if you want more detail, there is now a high resolution mode which can output 40MP photos in both JPG and RAW formats. To accomplish this, the camera takes a series of photos, shifting the sensor by a tiny, ‘sub-pixel’ distance between each frame. These are then merged to create a super high-resolution image. To shoot in this mode, you really have to use a tripod, and there are a couple of other rules you have to follow, but the results are worth it. Never before was it possible to capture so many details with such a small camera. 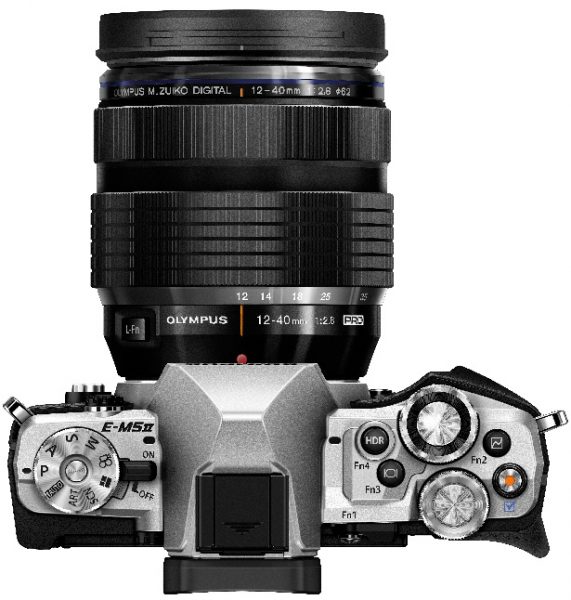 On its release, the original E-M5’s five-axis in-body image stabiliser was regarded as the most advanced on the market, and three years later, it still is one of the best. The E-M5 Mark II inherits an improved version of the same system, and it also reduces the blur caused by camera shake. With the 12-40mm lens at the wide-angle end, I could handhold the camera, shoot two-second exposures, and still manage to get fairly sharp images. That’s pretty impressive.

Video wasn’t the E-M5’s strong suit, but this is another area which has been significantly upgraded for the E-M5 Mark II. While it doesn’t allow 4K recording, the maximum full-HD frame rate has been increased to 60fps, and the maximum bit rate has been dramatically upgraded from 17Mbps to 77Mbps. As a result, the output video is a lot sharper and retains more fine details. The video quality may not be class-leading, but it’s not far behind. When I compare it side-by-side with the very popular Canon 5D Mark III, the video footage from the Olympus E-M5 Mark II is clearly a lot sharper and of higher quality.

It also has an external mic input, zebra display, focus peaking and an optional grip with a headphone jack in order to monitor audio. The fully articulated screen means you can shoot video without needing to attach an external screen.

But its best feature that none of its competitors offer is that its five-axis image stabilisation system can be used while shooting video, making it possible to create smooth, Steadicam-like video footage without the need for a heavy external rig—with any lens.

All these improvements makes the E-M5 Mark II one of the most versatile video cameras on the market, and an especially good choice for photojournalists, documentary photographers and videographers who need a very portable camera that can capture high-quality photos as well as decent video footage.