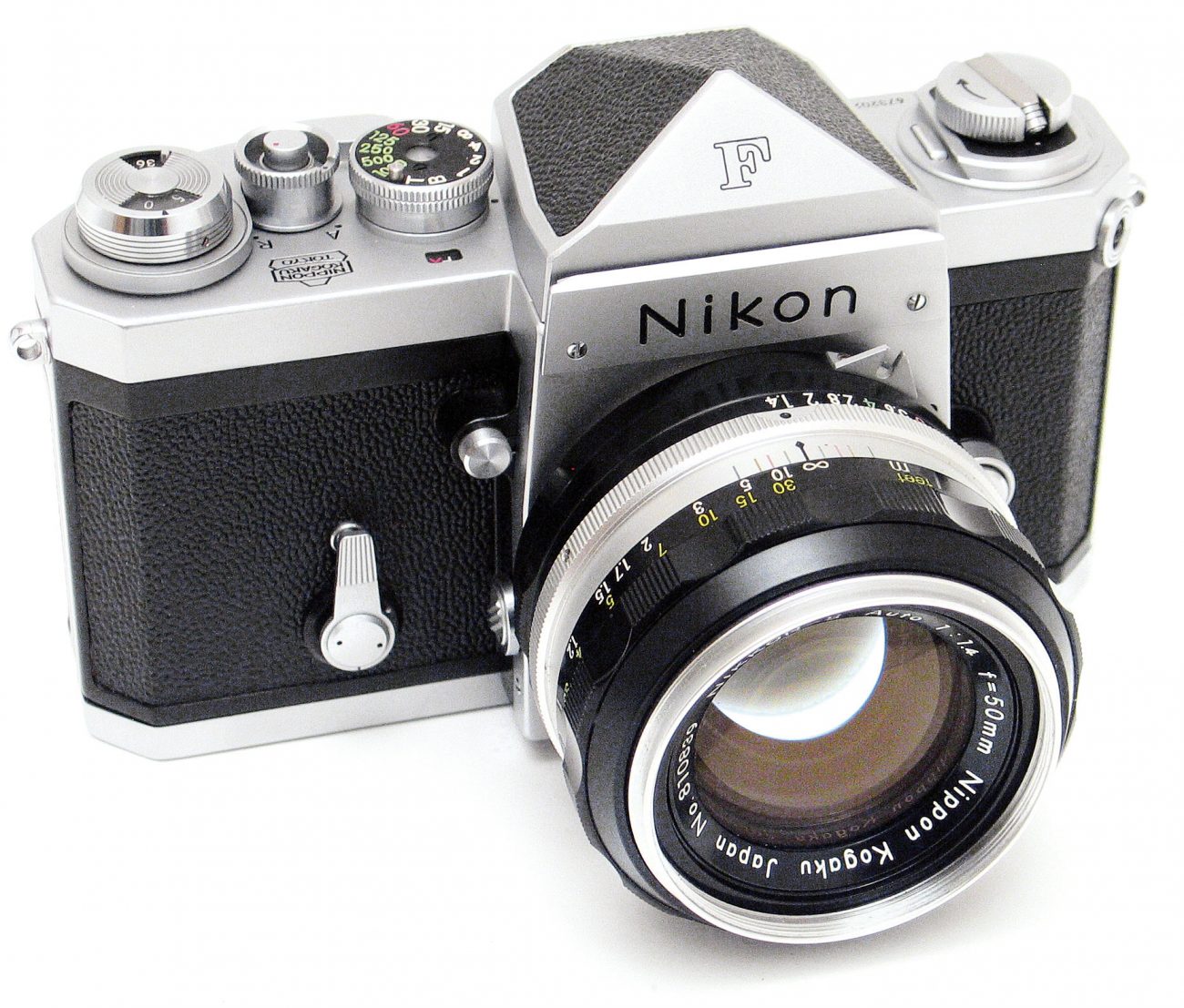 Before 1959, photographers only bought a Japanese camera if they couldn’t afford a German one. The market was dominated by Leica and Zeiss, and professionals largely shot on rangefinder models, such as the Leica M3.

SLRs of the era were heavy and slow. Their mechanics were unreliable. Their viewfinders were dim. Expose the film, and the mirror didn’t automatically return to the viewing position until the film was advanced. They weren’t the kind of cameras for anyone making pictures in a hurry.

In March 1959, the Nikon F was unveiled at a trade show in Philadelphia. It was an SLR—a revolutionary one. It took the best, most up-to-date technology from other cameras on the market, and combined all of those features in a single model. There was nothing like it in the world.

The Nikon F had an automatic diaphragm and an instant-return mirror, making it by far the quickest SLR of the era. Rather than a film winder, it had a detachable motor drive system.

A large reflex mirror meant that the viewfinder was bright, and reduced vignetting—and it also had a 100 per cent viewfinder, the first SLR to do so. It had a focal plane shutter with titanium-foil blinds—also a world first—not the cloth blinds of previous SLRs that could be burned through in bright sunlight.

Rangefinders, moreover, couldn’t handle focal lengths greater than 135mm, meaning that SLRs were the technology of choice for telephoto lenses.

Rumours abound that the ‘F’ stands for the designer of the bayonet lens mount, Mr Fuketa. (The mount is still used in Nikon cameras today, in a modified form.) However, Nikon itself says the F is derived from the middle of the word Reflex, chosen because the letter R is pronounced differently around the world, but F remains largely the same.

Celebrated graphic designer Yusaku Kamekura designed the body, deliberately drawing a contrast to other cameras of the day. Competitors’ models had rounded curves, but Kamekura envisaged a solid, boxy body. The camera was put through a series of stress tests to ensure it could stand up to heat, cold, and vibration.

This paid off, as the Nikon F quickly gained a reputation for sturdiness and resilience. Photographers covering the Vietnam War widely adopted it. So did astronauts (Apollo 16 launched with one) and mountain climbers (a group of Americans took one to the summit of Mt Everest in 1963). In 1970, Don McCullin’s Nikon F stopped a Khmer Rouge AK47 bullet in Cambodia, saving his life. The Nikon F was “a hockey puck that could take pictures,” according to legendary New York City camera repairman Marty Forscher.

Most tellingly, professional photographers abandoned the Leica M-series for the Nikon F in droves, and Leica would never recover its market dominance. As a Nikon ad in the late 1960s read: “Today, there is almost no other choice.”