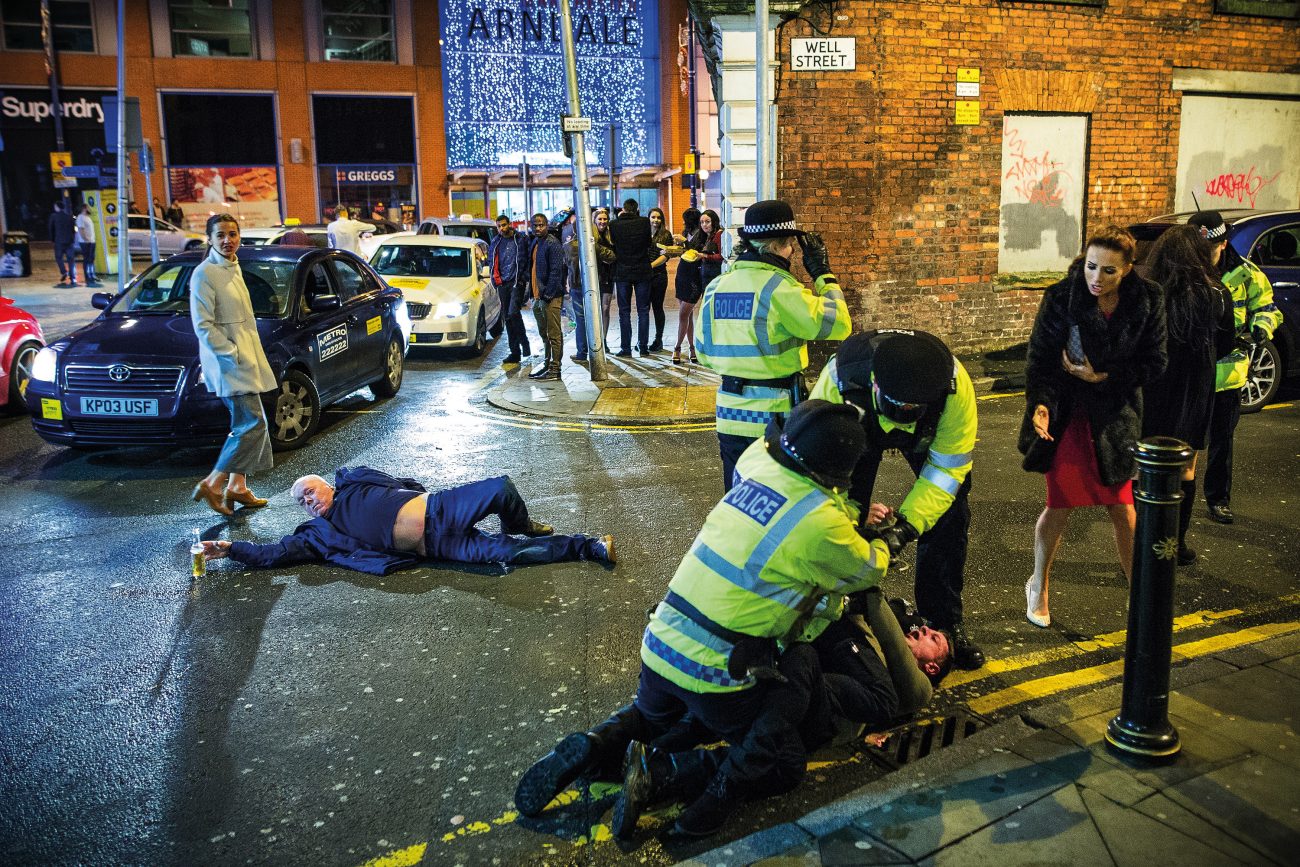 On New Year’s Day, this photograph was buried in a gallery posted online by The Manchester Evening News. A senior producer for the BBC, Roland Hughes, noticed it and tweeted about it. “So much going on in this pic of New Year in Manchester,” he wrote. “Like a beautiful painting.”

Who knows why the internet seized it. Perhaps it was New Year’s Day, and no one had much to do. Perhaps Twitter is packed with art lovers. Perhaps people really just like laughing at other people, as Hughes pointed out.

When someone superimposed the Fibonacci spiral onto it, a meme was born. Major news networks around the world ran stories on it. It was declared to have perfect composition, to capture the spirit of modern Britain. Someone Photoshopped the man in blue, casually reaching after his beer, into Michelangelo’s ‘The Creation of Adam’ in place of God. “It’s very well-weighted,” declared one Twitter user. “Like a Caravaggio.”

For photojournalist Joel Goodman, this image was the product of a long time spent documenting what he calls “the night time economy” of his home city. He’s fascinated by the range of emotion on display after dark. “It’s always a challenge to record as many different emotions in one picture as possible,” he says.

Goodman starting shooting nightlife as an amateur photographer, for practice. “It helped to teach me to photograph in difficult light and to sharpen my instinct for more candid photography. When I became a full-time professional photographer, I learned there was an ongoing interest in the story and I’ve carried on the project, albeit shot with a more commercial intent.”

He also wanted to do the story justice, providing an fuller picture of British nightlife than what he saw being covered elsewhere in the press. “There are plenty of photographs published that show people having a great time. It’s much safer and easier photographing happy, willing people posing than photographing angry, drunk people candid,” he told The Manchester Evening News. “That’s not a criticism of the former, but it’s one reason why the latter might stand out.”

As a freelance news photographer, Goodman prefers to search out stories on his own, avoiding more detailed briefs from newspapers or agencies. “I’m not looking to function as a button presser,” he says. “When I started I constantly worried about what a client would want on every job. Now I shoot for myself a lot more.”