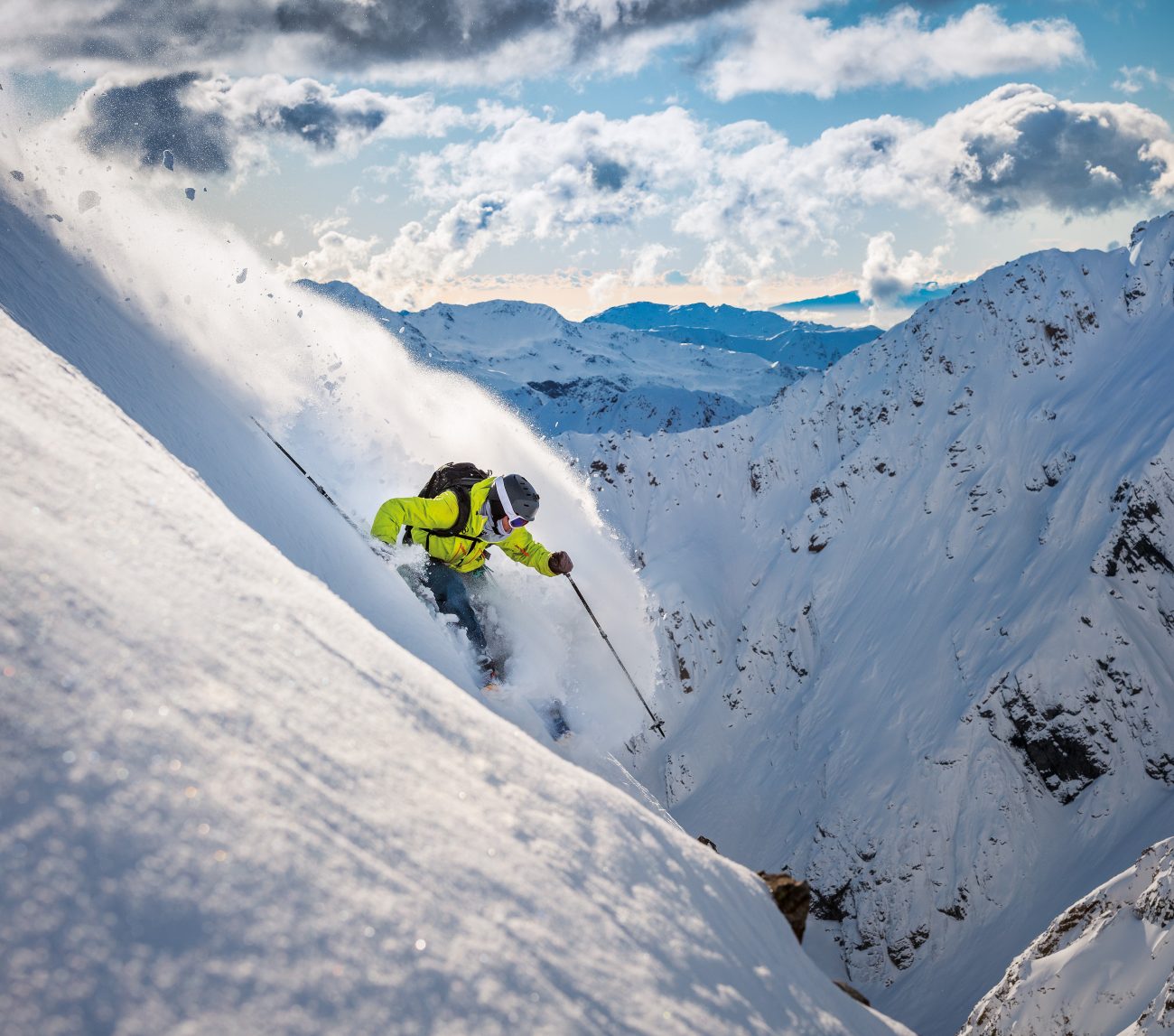 For Mark Bridgwater, a skifield is just a starting point. In search of both pristine snow and epic alpine scenery, Bridgwater and his friend Charlie Lyons, a pro freeride skiier, hiked up the back of the Temple Basin skifield in Arthur’s Pass and over the ridgeline to the Mingha Valley.

“We saw the Mingha was completely untouched, and had a lot of fresh snow in it,” says Bridgwater, an action sports and commercial photographer. “The light was right at the very top of the ridgeline, but the rest was in shadow.”

Bridgwater and Lyons resolved to return the next morning to capture the dawn, but they couldn’t resist a quick shoot. Bridgwater kicked himself a platform in the snow and got low, framing the shot with a bank of snow in the lower half. “A lot of skiing shots are quite busy photos, so I like having that real soft foreground for negative space,” he says.

Lyons took off down the mountain, and Bridgwater fired—shooting at the 11 frames-per-second burst rate of the D4S. It wasn’t until they were back home that he saw what he’d captured: “It’s typical Kiwi backcountry skiing,” he says. “One of those big-mountain skiing photos that are quite hard to come by, steep and a lot of action going on.”

Christchurch-based Mark Bridgwater, a former New Zealand representative in ski racing,  makes a habit of searching out overlooked mountainsides, with his pro ski friends along for the ride.

“That’s the thing with being a ski photographer—you have to be able to go everywhere the athletes go,” he says. “It’s a sport that I’ve always loved so I’m there just as much for the skiing as I am for taking photos.”

Not only to capture cool photographs of them in action, but for safety out on the mountain, too: backcountry exploring means avalanche risk, so teaming up with skilled friends is a must.

Bridgwater’s work has paid off: this year, he was the first photographer to have images featured on the covers of all three New Zealand skiing magazines.

“Ski photography started as a combination of my love of skiing and the landscape photography I was enjoying so much at the time,” he says. “It has evolved and translated over to commercial work well, and I now produce work for design studios and brands—capturing naturally lit, moving subjects for branding, advertising and promotion.”

Outdoor and adventure-sports brands such as Mons Royale and Macpac are regular clients, and his work translates well into sectors such as construction and agriculture.

Now, waiting for the New Zealand winter to kick off, Bridgwater looks back on this image as his favourite of the last season. “It’s the dynamism in it—you can sense that he’s going fast.”