Photographs can be art, entertainment and information all at once. But they can also serve more utilitarian purposes as maps, encoding land and sea into images. Up-to-date aerial imagery is of most immediate interest, but a 75-year-old box of large-format photographs of a tiny Pacific atoll found in a New Zealand museum may yet shed light on the greatest aviation mystery of all time.

At midnight on July 2, 1937, aviatrix Amelia Earhart and her navigator took off from Lae, Papua New Guinea, on the first of the final three flights of her circumnavigation. She had already flown 35,000 kilometres around the world, west-to-east, and was now bound for Howland Island in the Pacific.

Though a number of radio communications were intercepted, she disappeared en route, never to be seen again. Piecing together records of flight communications, researchers have suggested that she either plunged into the sea, or that she and her navigator, Fred Noonan, ditched their Lockheed Electra on Nikumaroro atoll, a low-lying crescent of coral some 600 kilometres south-east of her destination.

An ardent protagonist for the latter theory is Ric Gillespie; a US-based historian, air crash investigator and pilot who has made no less than ten expeditions to Nikumaroro since 1989. On each he has turned up artefacts ostensibly left by Earhart and Noonan which Gillespie suggests is conclusive evidence that the pair survived on the remote island for some time—a metal navigator’s bookcase, a piece of a shoe similar to that of Earhart’s, bones, and a scrap of aluminium to which Gillespie announced; “there is only one possible conclusion: We found a piece of Earhart’s aircraft.” 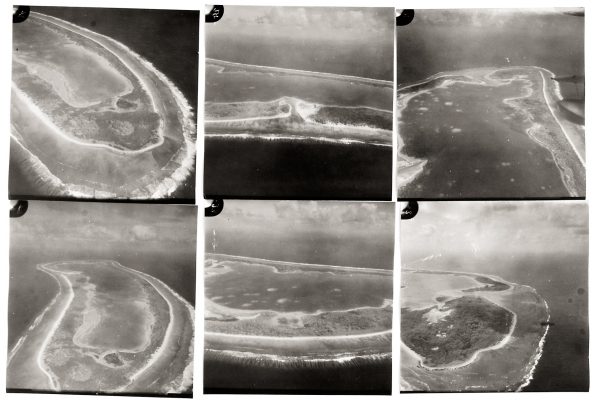 The latest line of enquiry rests in an unlabelled tin box of five sheets of contact prints and large-format negatives—47 five-inch ‘obliques’—of an aerial survey of the atoll by the New Zealand Pacific Aviation Survey on December 1, 1938, just 15 months after Earhart disappeared.

“For 25 years we have struggled to tease details from a handful of printed photos,” Gillespie told Discovery News. “Now we have an amazing array of detailed aerial images of every part of the atoll taken before the first colonists, or even the New Zealand Survey party, set foot on the island.”

Gillespie has since travelled to New Zealand to inspect and copy the negatives with forensic imaging specialist, Jeff Glickman, hoping to find within the grain some detail that might hint at Earhart’s survival on the island—debris, a campfire, the aircraft itself.

“I looked at the prints and I couldn’t see anything at all,” says Matthew O’Sullivan, the archivist at the New Zealand Air Force Museum who found the images. “But these guys know how to interpret images.”

This find, like others Gillespie has touted over the past two decades, seems surrounded by hope, scepticism and conjecture. The navigator’s bookcase was likely from a WWII-era bomber, the shoes two sizes too large for Earhart, the shard of aluminium a poor match for the Electra, and a bone that he suggested could be part of Earhart’s finger could just as likely have been from a turtle.

Will an aerial photograph reveal the truth? Can a picture a lie? As every photographer knows, there is an element of subjectivity in the viewing of any image.

Like searching for the future in tea leaves, it can be possible to see whatever you may want to see, or to envision something in the scatter of grain that may not be there at all.