The DJI Osmo looks like something out of Q’s workshop in a James Bond film. It’s housed in a violin-shaped case, which opens to reveal a small 4K Zenmuse X3 camera atop a matte-black handhold grip and integrated gimbal system. The Osmo not only looks slick, it’s designed to make your video look slick, too—it keeps the camera stable and level at all times so that you can capture smooth video even when you and your subject are in a chase sequence.

The Osmo camera records in 4K video resolution, full-HD and HD with a Sony Exmor R CMOS 12.4 megapixel sensor. One of the things I dislike about typical action cameras is the ultra-wide-angle field of view. Happily the Osmo has a 35mm-equivalent field of view, which really appeals to me for reportage storytelling and reduces wide-angle distortion.

The handheld gimbal, which uses the same stabilisation technology as DJI’s flagship Inspire 1 drone, has three motors for a three-axis stabilisation system that cancels out movement in three directions to keep the camera steady.

For my first film-making experience with the Osmo, I was outfitted in a beekeeping suit to make stills and video of urban beekeepers. Even when I tracked the beekeeper down three flights of stairs to her hives, the footage was smooth. I found the Osmo was at its best when I was moving with a moving subject. Watching the footage back in edit, I was surprised to see how smooth and detailed it was—not to mention that in the heat of a windless summer day, enclosed in a beekeeper’s outfit, it was a relief to be filming using a device that weighed under 500 grams.

A side arm attaches your smartphone to the device, transforming it into a viewfinder and control panel. On the back of the ergonomic handgrip, you can operate the record button and the separate stills shutter button with your thumb. A flat joystick button is also located on the back of the handgrip and lets you tilt and pan the camera. 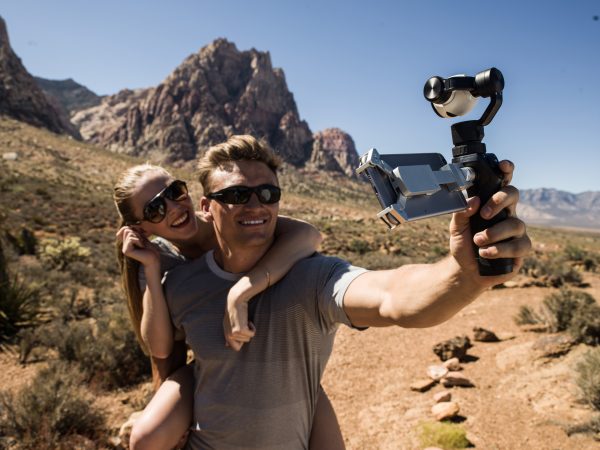 The DJI Go app is where most of the functionality of the camera is contained and you can use this to toggle between capturing video (normal or slow motion) and photographs as well as control the camera head, by pointing and moving your finger on the phone screen. You can also use the viewfinder to change the camera’s settings and view and edit the footage you’ve shot. The app allows you to adjust ISO, shutter speed, white balance and exposure compensation as well as set the video resolution and format, image ratio and even add a filter to the footage you’re filming.

If you’re recording audio, you can enhance its quality by plugging in an external microphone.

The OSMO captures stills in either JPG or Adobe DNG RAW files at maximum size of 4000 by 3000 pixels. You can also photograph in burst mode, panorama, and create time-lapse series.

Ultimately I thought the OSMO would be great for social media and web-based projects, especially where there is a lot of action. In fact, I’ll take it with me to film a busy restaurant’s rooftop hives and its compact kitchen on a manic Friday night. With the Osmo I’ll be part of the action without creating footage that looks jostled and hurried.

See more at: lacklands.co.nz and dji.com