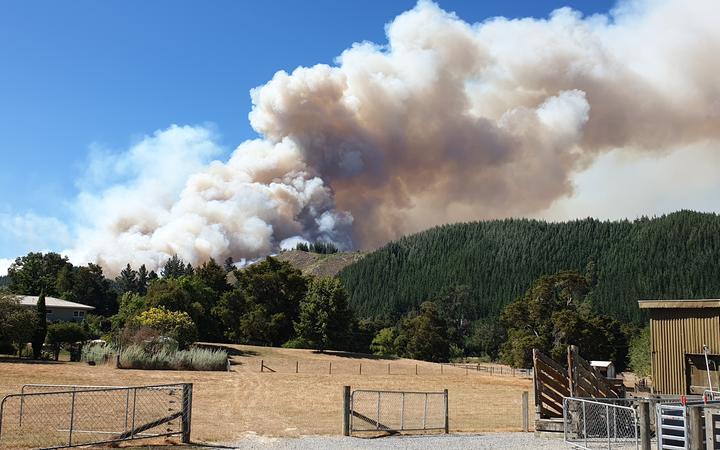 The head of Nelson-Tasman’s emergency management group said better communication with the public is needed around emergency cordons.

A detailed report on the response to the Pigeon Valley wildfire in February, which triggered the evacuation of 3000 people, was released in Richmond this morning.

The independent report consolidated the findings of several workshops, and found the multi-agency response was efficient and saved lives.

But Roger Ball accepted it was a stressful time for many people, who had to leave their homes, pets and livestock at short notice.

“We’ve acknowledged that our communication and processes around evacuation and cordon management was where we felt there was a lot of anxiety, a lot of stress and that we could have done a better job to mitigate that, and make our processes a bit smoother,” Mr Ball said.

“What we heard afterwards was that it worked better in the early stages when things were still ‘forming up’ – but as more agencies became involved and processes became more formalised, it slowed down and people felt it was harder to find out what was going on and we were slower to respond.”

He said a process that was designed to assess risk carefully, keep people safe and get people back home efficiently, created the unintended consequence of making things slower and more complicated than what they should have been.

Mr Ball said cordon management was complex, but people also needed to be better prepared to leave home during a large-scale emergency. He said once a state of emergency was declared, authorities had the power to evacuate people even if they wanted to remain.

The report said there was no loss of life or serious injury during the three-week emergency declaration, due to the professionalism of emergency responders and the Nelson and Tasman councils.

Mr Ball said the report made several recommendations, which had started to be addressed, including public education about fire readiness at the start of summer, and flood preparedness in early winter.

They also needed to improve the process around getting livestock and animals to safety. Mr Ball said that during the fires this was inconsistent and caused concern.

The Ministry for Primary Industries was the lead role in animal welfare, helped by charity Helping You Helping Animals (Huha), set up at the Richmond A&P Showgrounds. Mr Ball said it demonstrated there was capacity to cope in such circumstances.

He said animal welfare during an emergency was an evolving issue that first came to light during Hurricane Katrina, which struck Florida and Louisiana in 2005, when people risked their lives returning home to retrieve pets.

Mr Ball said there was a spectrum of views on the importance of saving animals – some people considered them as important as their children and others viewed animals as part of their property.

“But the very clear trend, and the opinion of the CDEM group is that animal welfare is an extremely important priority and we can see it coming up the rankings of the things we need to work on.”

Mr Ball said people were generally not able to take pets with them to an emergency evacuation centre, except on some occasions.

“We try to make provisions when we can. If you’ve got a companion animal, then that’s usually accommodated.

“If we’re talking small amounts of livestock, and we’re able to out something alongside an emergency centre that’s a possibility, but really, the best option is the plans we have with the likes of the SPCA and other agencies, because you get a lot of complication with bringing… yes, your horse.”

A final recommendation was to develop a better plan that considered support services like accommodation and transport for people arriving from outside to help in an emergency response.