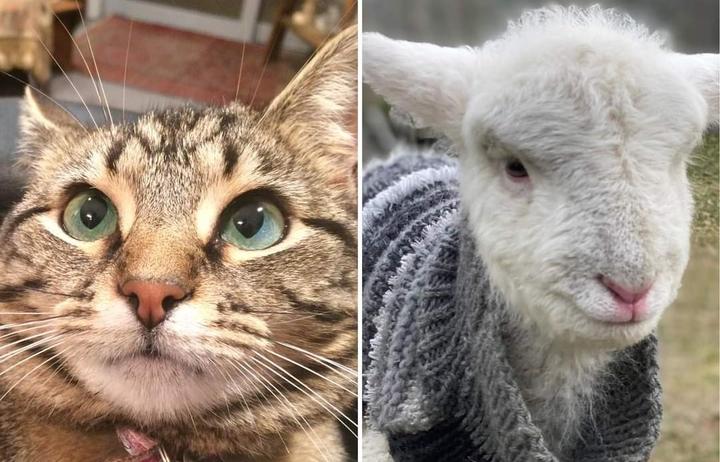 Like winning the lotto – that’s how a Lake Ōhau couple have described discovering their pets alive and well days after they were separated by fire.

Residents frantically tried to find and bring their pets with them as they fled the embers and flames that swept through the village on Sunday morning.

The fire destroyed or damaged at least 40 homes as it burned through more than 5500 hectares.

Days later the fire remains active – with about 17 crews working to manage hot spots and secure the perimeter.

They were staying at The Barn at Killin B&B which he and his partner Dwayne own.

“Lala the crazy cat – she was thrown in with Holly and my mum, and they took off. We got Claude our ginger cat and Tay our dog and rescued them. We squished them in the car here. But we just couldn’t find Coco and of course, you don’t think about a little lamb who’s way over there at the other end of the paddock and the paddock is on fire. You just gotta leave her and hope for the best,” he said.

It was a terrible morning – flames strained towards the sky, reaching up to 15 metres.

For three days they fretted – not knowing the fate of Gladys, their one-month-old pet lamb and their cat Coco.

They couldn’t access their property on Monday’s bus convoy … it was still smouldering.

But on Tuesday night, they were allowed back in with a firefighter escort.

Hugh Spiers began calling to Gladys through the darkness.

“I could hear this little baa baa, and it was Gladys … I just ran in the dark and I could see this little thing flying towards me like a puppy. I just jumped down onto my knees and there she was … licking me like a puppy and I had a bottle of milk formula with me and she gobbled it down,” Spiers said.

“I was just overwhelmed with excitement, but I think she was probably more excited to see me.”

But he couldn’t see Coco.

“Amazing … like a phoenix out of the ashes there were two of our little furry babies. We’re really happy guys. We won lotto last night.”

With all his pets safe, he and his family returned to the village again today to see the damage in daylight – and discover how Gladys had escaped her pen.

She had pushed the gate so hard she broke the latch.

On the other side of the fire front, Quailburn sheep and beef farmer Grant Murray tried to save his sheep during the intensity of the fire.

Back in Twizel, Fire and Emergency incident controller Rob Hands said other residents were hoping to find their beloved pets.

“One of the residents has lost its dog, Milo, and it’s been spotted a couple of times. The latest time was about 10am this morning. Not that enthusiastic to get in the vehicle just yet, but we have got chocolate fish for those who do find him,” Hands said.

Away from the animals – insurance assessors have been able to get access to the area for the first time, looking at individual properties today.

“It’s the small things that do make a difference and when you’ve got nothing… Talking to a gentleman today who was just chuffed that he had a new pair of underpants on today so it is about helping with the basic needs at the moment,” Kircher said.

Kircher said discussions had already started about where the government’s $100,000 relief funding would go.

“One of the possibilities is actually the next rates demand and helping those people, particularly if they haven’t got a home anymore. Council can just have a remission but actually, that puts the various accounts into deficit so rather than doing that it could potentially be used for that. But there are more personal needs and so on that we may be looking to help them with.”

The council was continuing to assess critical infrastructure including water supply, sewerage and roads.

More than 30 residents accessed their properties today – double the number who went in yesterday.

Civil Defence controller Murray Linwood said work was underway to allow residents to return permanently, but it took time and they faced other challenges.

Rob Hands remained optimistic they would have the fire under more control soon.

As of this evening, 9 percent of the perimeter is controlled to 50m.

That means no hot spots within 50 metres while the remaining 9 percent is controlled to 10 metres.

That’ll be welcome news to the residents still waiting with bated breath to hear about their pets – hoping they’ll get a reunion just like Gladys and Coco’s.

Fire and Emergency said two crews would monitor the fire overnight along with drones to map any hot spots.