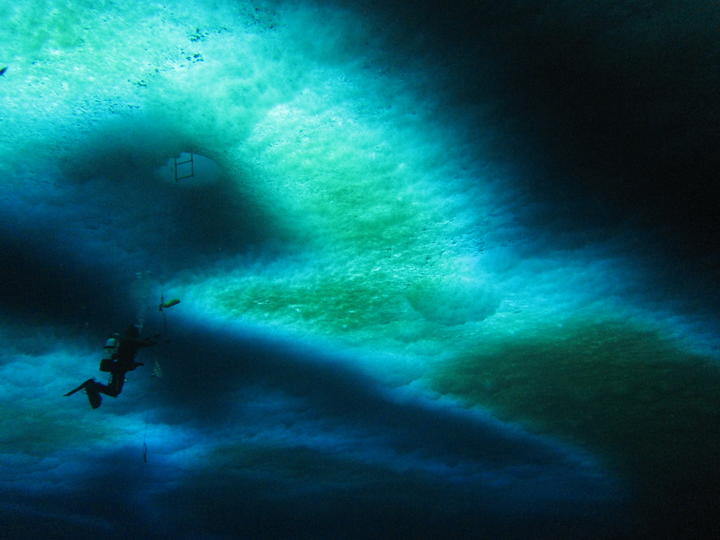 Sea ice in Antarctica is home to an upside-down garden that is the powerhouse at the bottom of Antarctic food webs.

But what will happen to this remarkable ecosystem in a warming world?

Find Our Changing World on Apple Podcasts, Spotify, Stitcher, iHeartRADIO, Google Podcasts, RadioPublic or wherever you listen to your podcasts

Microscopic plants bloom on the underside of the Antarctic sea ice in spring, as soon as the sun returns.

Less than one percent of ambient light makes it through the sea ice, which averages 1.7 to 2 metres thick at Cape Evans, but it is enough light to trigger the plants to begin photosynthesis.

These ice algae, along with bacteria and viruses, live in tiny pockets and channels in the bottom few centimetres of the ice. These pockets between the ice crystals are created by brine which is excreted as seawater freezes.

The tiny algae and microbes are grazed on by young krill and forms a vital part of their diet.

Krill underpin the Antarctic food web, and seals, penguins and whales all rely on the huge pulse of krill that follows the annual spring algae bloom.

New Zealand and Australian researchers have been studying this under-ice community for many years at Cape Evans, on Ross Island.

Andrew Martin, from the University of Tasmania, says the current research, funded by the New Zealand Antarctic Research Institute, aims to understand what might happen to Antarctica in the future as global temperatures rise.

He says that in the next 80 years, Antarctic sea ice is predicted to shrink in area and thickness by a third. As well, increasing snow and wind will change how much light gets through the ice.

Andrew and colleagues are trying to measure and predict how these changes will affect life in Antarctica, especially the ‘grass of the sea’ under the ice.

In November 2019, the researchers used coloured perspex panels screwed onto the ice to mimic changing light conditions. Vanessa Lucieer and the On Thin Ice team from the Institute of Marine and Antarctic Studies at the University of Tasmania, used hyperspectral scanning and remote operated vehicles, as well as ice cores, to measure how microscopic life responded.

A hyperspectral camera composes an image that uses the full spectrum of light and goes beyond the range visible to the human eye.

Andrew says they were surprised to discover that there was more abundant microbial life under the red, green and blue acrylic panels than under the surrounding sea ice. The make-up of the communities had also changed.

He says it is too soon to know what this means, although he speculates that there will be winners and losers amongst different species which will mean that some kind of microbial community will survive. One result might be an increase in phytoplankton living in the water column, rather than under the ice.

However, he says the loss of sea ice will have significant consequences for krill populations, as the juvenile krill are so dependent on the growth of ice algae early in spring.

Voices from Antarctica – listen to the full series

Voices from Antarctica 2: Scott Base

Voices from Antarctica 3: Flags to physics

Voices from Antarctica 4: Best journey in the world

Voices from Antarctica 5: Waiting for Emperors

Voices from Antarctica 7: What the ice is saying

Voices from Antarctica 8: Under the ice

Listen to a wide range of stories recorded in and about Antarctica from our archives.