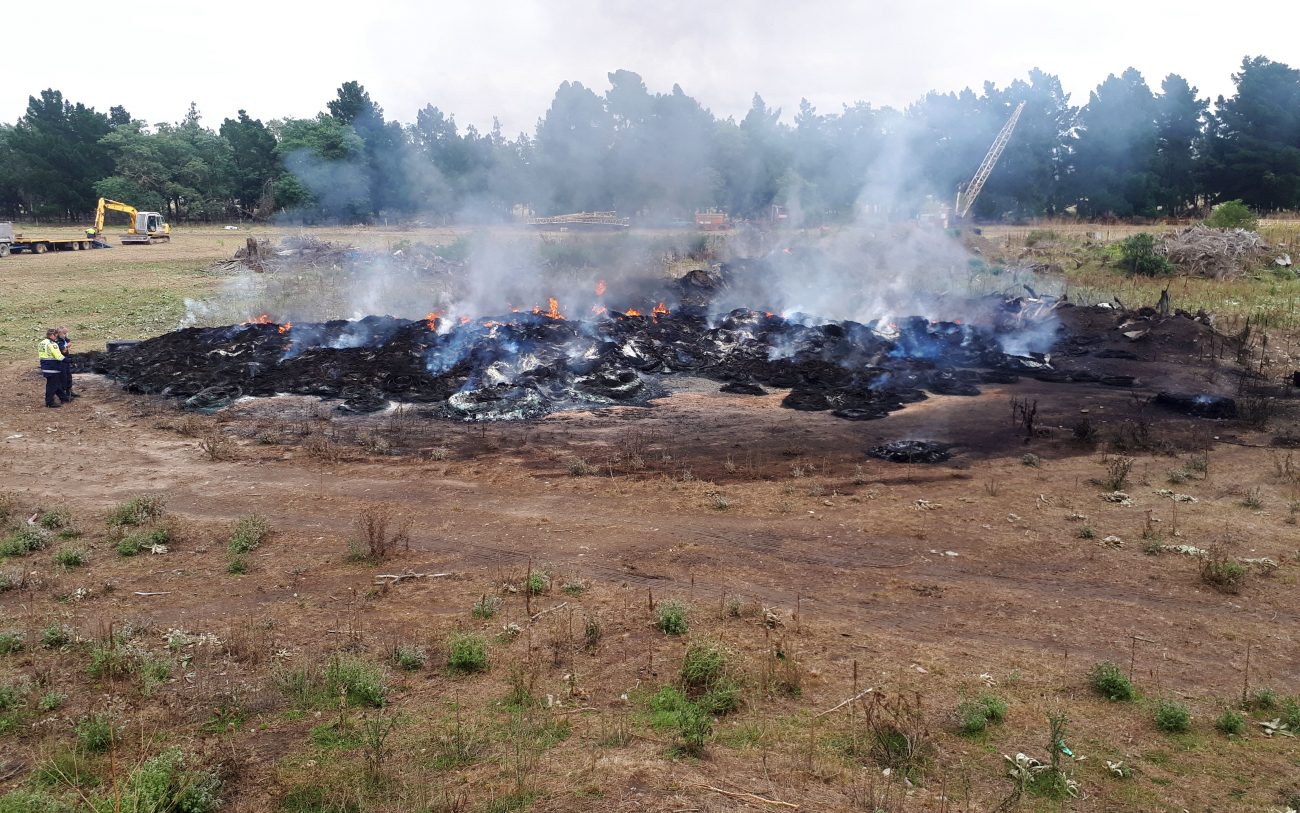 The Hurunui District Council says there is nothing more it could have done to prevent a fire, despite recommending six months ago that safety measures be taken.

Police said the pile of 500 tyres was deliberately set alight on Monday evening, with 19 fire crews battling through the night to stop the flames from reaching a pile of 600,000 tyres, just 50m away.

RNZ has discovered the risk of such a fire was identified by the local council at least six months ago, without any action being taken to reduce it.

He said he was thankful the wind did not blow the toxic smoke into the town of Amberley, just 2km away.

“It’s the worst sort of fire, it’s like an oil spill at sea, it’s your worst possible nightmare, you’ve got toxic smoke, you can’t easily put it out, it just burns and burns and burns.

“And then on top of that, anything you do is going to take toxic chemicals down into the soil and affect ground water.”

This was not the first fire to come close to the massive tyre dump.

About a year ago another blaze came close to setting it alight.

Last August, Hurunui District Council chief executive Hamish Dobbie recommended a firebreak be built around the pile to prevent any future blazes from reaching it.

He said legal action planned at that time by the Canterbury Regional Council (Ecan) against the owner of the tyres prevented his council from building the firebreak.

The owner of the tyres, Michael LeRoy, had been sent a number of $700 fines for letting the tyres build up, none of which had been paid, Mr Dobbie said.

He said there was nothing more they could do.

Ecan compliance manager James Tricker confirmed it had taken Mr LeRoy to the Environment Court to force him to remove the tyres.

He said the council had decided the remnants of Monday night’s fire should now be buried.

“The main contaminants we’re looking at, which would be metals and hydro carbons, travel very very slowly through the soil.

“Their [scientists] advice was to get it capped as soon as we could and then remove what’s there as soon as we can. It’s obviously hot at the moment so as soon as it’s safe to do so we’ll be taking samples, then we’ll know where we can take it for disposal.”

The land that the tires sit on is owned by Warren Hislop.

His spokesperson, Angelique​ Hyde, said he regretted ever agreeing to let Mr LeRoy store the tyres, and said he had not paid any rent for the site for about a year.

“It’s been something I’ve been trying to work with for the past 12 months to get something fixed and finalised, and it hasn’t been working.”

She was not surprised to hear the fire was deliberately lit and suspected it was done to get some action on getting the tyres removed.

As for when the tyres would finally be taken away, the Environment Court said the matter was likely to be heard in April.