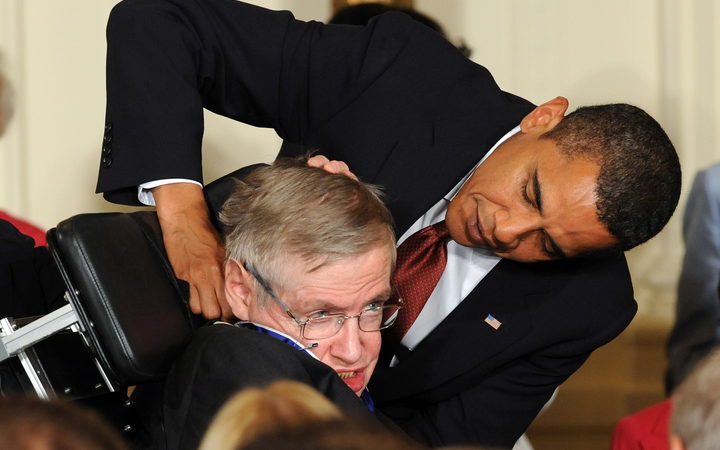 Scientists, politicians and actors have paid tribute to world renowned physicist Stephen Hawking, who has been called an “inspiration to millions”.

The British scientist, famed for his work on black holes, died peacefully at his home in Cambridge aged 76.

Astronomer Royal Lord Rees, one of the world’s most eminent scientists, described his life as a “triumph”.

Others described him as a “unique individual” whose death “has left an intellectual vacuum in his wake”.

Prof Hawking was diagnosed with a rare form of motor neurone disease at the age of 22 and was told he had only a few years to live.

He was known for his theories on black holes and relativity and went on to publish several popular science books including A Brief History of Time.

The University of Cambridge, where Prof Hawking completed his PhD and went on to become Lucasian Professor of Mathematics – a role once held by Sir Isaac Newton – described him as “an inspiration to millions”.

Queues have formed at Gonville and Caius College – where Prof Hawking was a fellow for more than 50 years – to sign a book of condolence.

Buckingham Palace said the Queen will be sending a message of condolence to Prof Hawking’s family.

Prof Hawking’s children, Lucy, Robert and Tim, said in a statement: “His courage and persistence with his brilliance and humour inspired people across the world.

“He once said, ‘It would not be much of a universe if it wasn’t home to the people you love’. We will miss him forever.”

Speaking to BBC Radio 4’s Today programme, broadcaster Prof Brian Cox called him “one of the greats” and said physicists in 1,000 years’ time “will still be talking about Hawking radiation”, his theory about black holes.

British astronaut Tim Peake, who flew in space in 2016, said Prof Hawking “inspired generations to look beyond our own blue planet and expand our understanding of the universe”.

Many friends and fans have also hailed his humour, with actor Eddie Redmayne, who portrayed Prof Hawking in 2014 film biopic The Theory of Everything, calling him “the funniest man I have ever met”.

“He virtually created the publishing genre of popular science. I will miss our margaritas but will raise one to the stars to celebrate your life,” he added.

Meanwhile, Lord Rees – who holds the most prestigious post in astronomy in the UK – recalled meeting Prof Hawking at Cambridge University in 1964, describing him as “unsteady on his feet and speaking with great difficulty” following his diagnosis with the degenerative disease.

“Even mere survival would have been a medical marvel, but of course he didn’t just survive. He became one of the most famous scientists in the world,” Lord Rees said

“He was diagnosed with a deadly disease, and his expectations dropped to zero. He himself said that everything that happened since then was a bonus.”

“And what a triumph his life has been,” Lord Rees added.

Prime Minister Theresa May opened PMQs with a nod to Prof Hawking’s “exceptional contributions to science and our knowledge of the universe speak for themselves”.

“As his children have said, his courage and persistence with his brilliance and humour inspired people across the world,” she said.

Labour leader Jeremy Corbyn also paid tribute to the physicist – who was a Labour supporter – and said he “inspired the world with his determination to explain the mysteries of the cosmos” and “showed breathtaking courage to overcome life’s adversities”.

Former US President Barack Obama, who Prof Hawking met in 2009 to receive the Presidential Medal of Freedom, tweeted a photo of them both alongside the words: “Have fun out there among the stars”.

Have fun out there among the stars. pic.twitter.com/S285MTwGtp

Meanwhile, from the worlds of science, technology and space, Nasa said Prof Hawking’s theories “unlocked a universe of possibilities”.

Remembering Stephen Hawking, a renowned physicist and ambassador of science. His theories unlocked a universe of possibilities that we & the world are exploring. May you keep flying like superman in microgravity, as you said to astronauts on @Space_Station in 2014 pic.twitter.com/FeR4fd2zZ5

American astrophysicist Neil deGrasse Tyson tweeted: “His passing has left an intellectual vacuum in his wake” while George Smoot, who won the Nobel Prize in Physics, described Prof Hawking as “very competitive”.

The European Space Agency shared a photo of Prof Hawking in 2007 experiencing zero gravity aboard a plane, alongside a caption which said he “showed us there are no limits to achieving our dreams”.

“Prof Hawking was a unique individual who will be remembered with warmth and affection not only in Cambridge but all over the world,” he said. “He will be much missed.”

Comedian Dara O’Briain, who has a degree in mathematics and theoretical physics and is also the presenter of the BBC’s Stargazing Live, called Prof Hawking “a hero of mine”.

He said: “What a privilege it was to know Stephen Hawking. He was a triumph of what we, as humans, can achieve.”

I asked him once “How have you lived so long?” And he said “How can I die, when I have so much of the Universe left to explore?”

Meanwhile, neuroscientist and The Big Bang Theory actress Mayim Bialik, who met with Prof Hawking when he starred in the series, shared a photo of him and the cast.

She described him as “the greatest physicist of our era” while the show itself thanked him “for inspiring us and the world”.

In loving memory of Stephen Hawking. It was an honor to have him on The #BigBangTheory. Thank you for inspiring us and the world. pic.twitter.com/9rWoYqIToy

Many people have praised Prof Hawking’s contribution to popular culture, with Oxford University biologist Sally Le Page remarking he was “as much as a cultural icon as a scientific one”.

According to online retailer Amazon, Prof Hawking’s book A Brief History of Time has risen to the top of its best sellers list following the announcement of his death on Wednesday.

The Royal Albert Hall said the “genius” Prof Hawking was the second physicist, after Albert Einstein in 1933, to ever sell out the venue with his lecture in 1995.

The Motor Neurone Disease Association said Prof Hawking “played a vital role” in raising awareness of the disease, which kills more than half of people within two years of diagnosis.

The @mndassoc is saddened to learn the death of Professor Stephen Hawking, Patron since 2008.

The charity said it had seen such an “influx of donations” following the announcement of Prof Hawking’s death that its website had crashed.