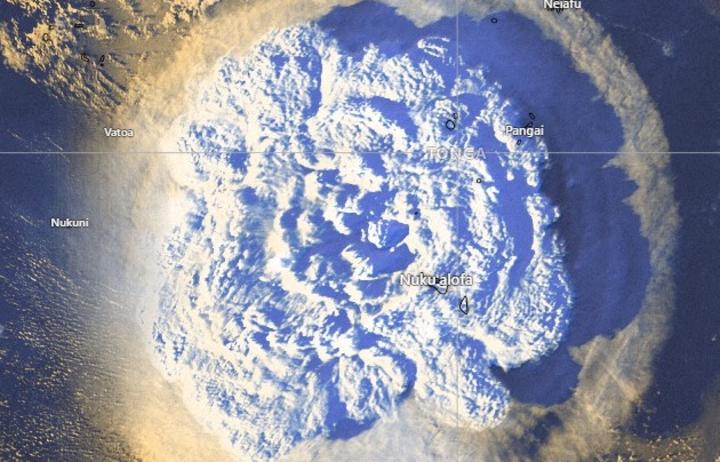 The eruption of underwater volcano Hunga-Tonga-Hunga-Ha’apai has had a significant impact on the environment beyond the tsunami felt in Tonga.

GNS Science volcano duty officer Dr Geoff Kilgour said it was likely the vents that exploded were just beneath the sea surface, sending a 20km-high plume of smoke and ash into the stratosphere which spread into a large umbrella cloud of around 300km in diameter.

That resulted in ash, small particles of broken rock falling back towards the earth, and an increased presence of sulphur from the explosion.

“You’ve had magma somewhere between 11,000 and 12,000 degrees, interacting with seawater, that very quickly changes that water into steam so it rapidly explodes and fragments that rock into very small pieces, and then it sent a very strong impulsive explosion and the really unusual aspect about this eruption is that it’s essentially sent this huge pressure wave, right around the globe.”

People around the country reported hearing loud explosions when the volcano exploded and Kilgour said the low frequency signal, which sounded like the bass coming from a car playing loud music, was recorded on volcano monitoring acoustic sensors across the world.

Kilgour said it was also likely the eruption had significantly changed the symmetry of the volcano under the sea.

The January eruption followed another large explosion on 14 December that Kilgour said could signal the volcano’s transition into a period of increased volcanic activity.

“Eruptions like this are very explosive and seem to be a much larger step up from what it’s been doing over the last sort of decade, where it’s been effectively building up a cone with relatively smaller eruptions with impacts quite close into the volcano.”

That was a cause for concern for nearby islands as Kilgour said it was possible large eruptions could continue for some time.

“We don’t really know what size of eruption will continue on from now. It’s quite possible that the eruption that’s just occurred is the largest eruption of a sequence that might tail off over time and if that’s the case, it would be unlikely to produce broad tsunami impacts around the Pacific.

“But if we have an eruption of a similar size and the vent is submerged beneath the sea surface, then it’s quite plausible that we see the same kind of impacts in the future.”