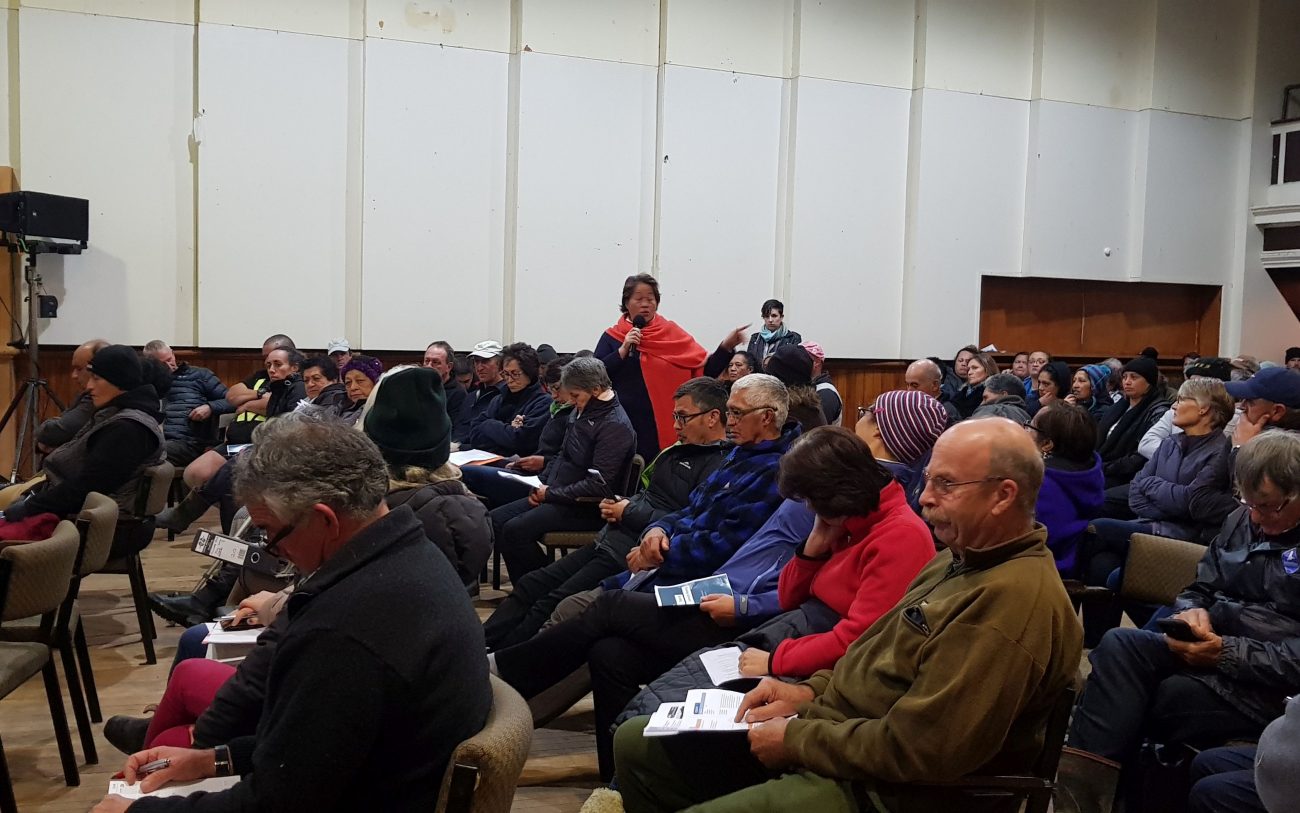 Frustrated Tolaga Bay locals have been left none the wiser following a meeting last night about massive storm damage.

Forestry debris washed down from hillsides blocked rivers and damaged farms in two bouts of heavy rain in the region earlier this month.

More than 100 people turned up to get answers from the three major forestry companies in the area and Gisborne District Council at a community meeting at Reynolds Hall in Tolaga Bay.

Locals wanted to know who was at fault, who would be paying, and what could be done to stop it happening again.

Landowner Des McGrannaghan used the meeting as his chance to tell the forestry companies exactly what was on his mind.

“This accident was waiting to happen and no one is prepared to take responsibility for it.

“Us down here, we all knew it was going to happen it was a question of when. Your practices up there are disgraceful.”

Forestry companies Ernslaw One, PF Olsen and Hikurangi Forest Farms said the damage was not caused by negligence.

After the meeting PF Olsen harvest manager Warren Roche said all correct processes had been followed and all debris was where it should have been.

“The hill is probably the best place for [the debris] because in any normal event it wouldn’t have mobilised. To my best knowledge the wood was all in the right places.”

During the meeting Susie Te Rure-Puha said the council should have done more with the information it had from a report on forestry, completed after last year’s Cyclone Cook.

The report found piles of slash – forestry debris – were routinely stored on flood plains and that future downpours would cause risk for buildings and infrastructure.

It predicted the damage that unfolded over the past weeks was highly likely.

“You found that there was a lot of forestry among the wood there, the report was done. So the community does think you’re at fault here, council, around your management of the resource consent,” Ms Te Rure-Puha said.

“That is what we do believe, you need to prove us wrong.”

Council environmental director Nick Zaman said the council was investigating its consent management processes but had made some changes after the report was finalised.

Mr Zaman said council had told the forestry companies about the report and warned them about what could happen.

“We’ve also held workshops with the forestry industry in terms of engaging with them and also educating them out what is required to be done.

“So I think it’s actually time to be hearing from the forestry council about what they’re actually doing about this.”

Local farmer Clare Parker said hundreds of thousands of dollars worth of damage had been done to her land.

She wanted the council to commit to a solid plan.

“While you guys are doing an investigation on yourself and the forestry and your own consents, we’d really like some immediate compensation and some immediate clean-up put in place.

“Can the council agree to sending weekly updates, we’re really keen to see a road map of what’s happened the last two weeks and what’s happening next.”

Forestry worker Shaun Mitchell, who had his home destroyed in the flood, said the industry had a lot of work to do but it needed to be a community effort.

“I’ve given the industry 20 years, I’ll give it another 20 but lets get our acts together as a community.

“A lot of work comes to this region through forestry, a lot of us are employed by it. But we’ve got to get it together.”

Forestry companies will help clear the 36 affected farms, but no one has said they will clear the debris from the beach and rivers and there is no plan for where that debris will go.

Four people are still out of their homes and eight roads remain closed.