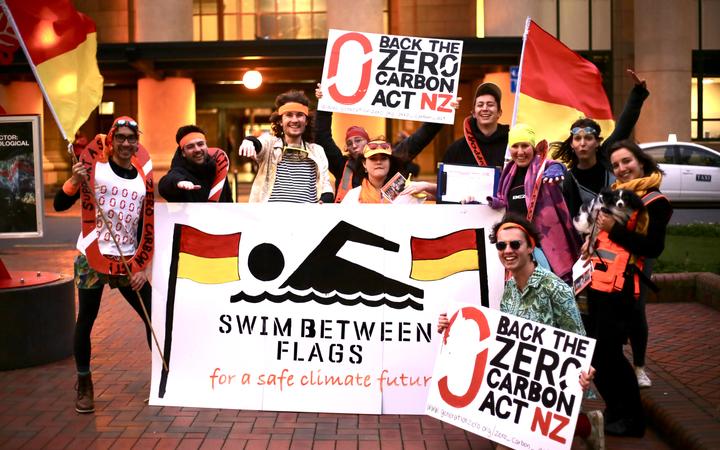 A climate change advocacy group hosted a party at Wellington Railway Station this morning to remind commuters about the threat of sea level rise.

Generation Zero, a volunteer, youth-led organisation that champions a zero carbon Aotearoa-New Zealand, hosted the party at the capital’s main station this morning. It is hosting submission parties around the country.

Member Monique Bartosh said action on climate change was needed or Wellingtonians would “find themselves swimming to work”.

“This is the moment for us to make our voices heard on the Zero Carbon Bill and strengthen New Zealand’s climate change law for decades to come.”

Another member of the group, Elliot Blyth, said coastal cities such as Wellington, the Hutt Valley and Kāpiti were “extremely vulnerable” to sea level rise.

“Yet New Zealand continues to emit enormous amounts of greenhouse gases that contribute to the climate crisis.”

Generation Zero spokespeople are urging New Zealanders to make submissions on the Zero Carbon Bill before they close on 16 July.

The bill will require the government to introduce economy-wide emission reduction policies and make plans to protect New Zealanders from the impacts of climate change.

The bill is before the Environment Select Committee and is expected to be enacted before the end of the year if passed into law. Its first reading was upheld in parliament 119 votes to one.