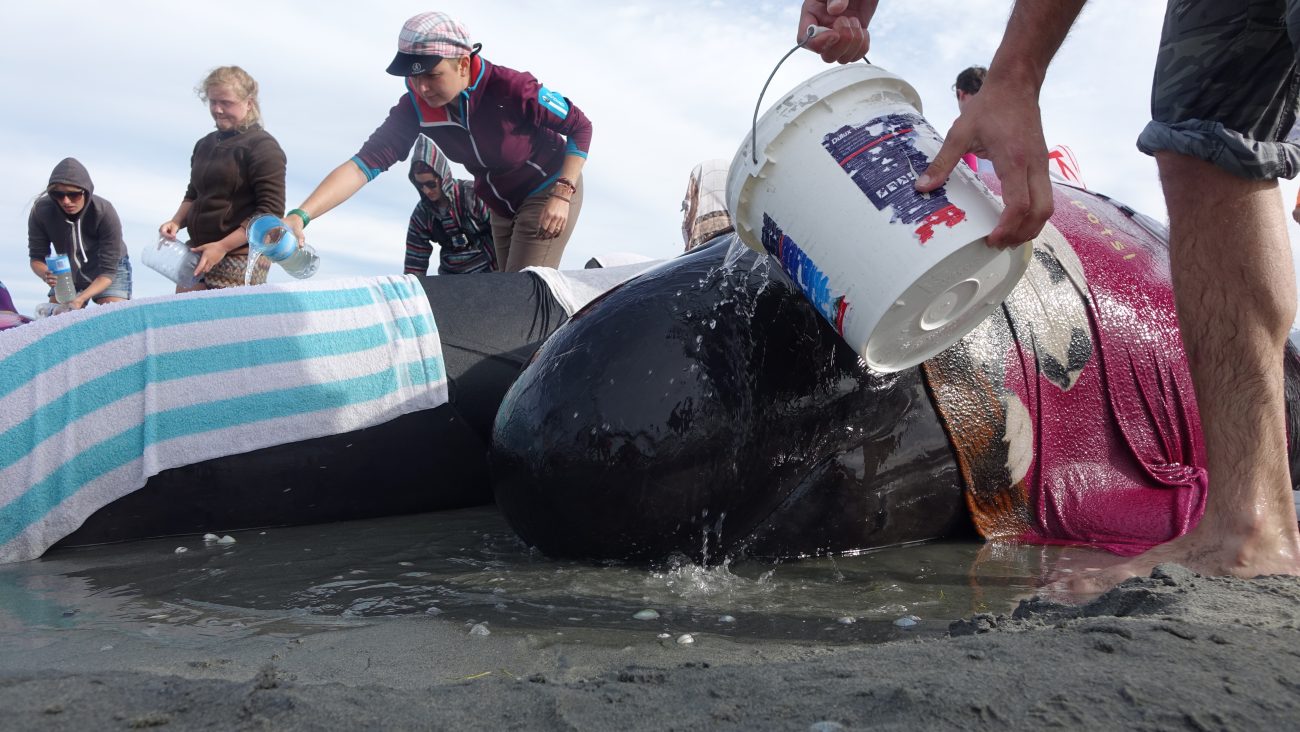 First Person – A week ago, Farewell Spit was left a graveyard of more than 300 dead whales, after one of the biggest strandings in New Zealand history. Reporter Michael Cropp went there – and found eight more stranded on the beach.

Ten minutes into walking down the beach and I begin to understand why the locals nod about the name Farewell Spit.

The bones of birds and fish give it away.

It is here that 300 pilot whales have died in strandings since 10 February.

Farewell Spit is now a graveyard.

When I arrive, the beach is covered in whales’ blood and scrape marks left by the diggers that moved them.

Pilot whales are social creatures. They probably followed each other onto the spit’s tidal flats.

They remind me of big, wet, blubbery lemmings, beaching en masse because their leader did.

A woman who volunteered for most of the weekend tells me how emotional she found it.

“You do have a connection with them, they respond to you, they’re always looking at you.

I reach a sign that reads “No entry beyond here”. The beach disappears and the dunes rise straight from the sea.

I take off my shoes. The smell is rancid, full of death.

I push through the toitoi, grasses and my need to breathe to get back to my car.

I start driving and notice a cluster of black birds off Taupata Point.

Some are grouped together, big and black enough to look like a whale.

“They’re just black swans,” I tell myself. They weren’t.

I pull over and use my camera to zoom in.

Several more whales have beached themselves.

More whales have stranded in Golden Bay. DoC is on its way. People are mucking in to help out. pic.twitter.com/3kNoE6q0iQ

A German tourist running back to his car confirms it.

I call the newsroom, then the Department of Conservation’s Takaka office.

Keep them wet, cover them if you can, keep their blowholes clear and stay away from the tails.

Keeping the whales wet is pretty much all people can do now. The tide is racing out. @radionz pic.twitter.com/B3AoeKTQOH

“You’re in charge until we get there,” says the DoC ranger at the other end of the line.

I consider the ethics of a journalist intervening in the story.

“Careful,” I shout at a woman stepping over the tail of the largest whale there.

Decision unwittingly made, I briefly take charge – supervising people, making sure every whale gets equal treatment.

Freedom campers offer their towels, t-shirts and sarongs to drape over the whales.

They grab their chilly bins, water bottles, cooking pots and mixing bowls to fill with water to keep the whales wet.

Volunteers work until nightfall. They hope the whales will return to sea in the high tide.

Come morning, to the relief of many, the whales have left Farewell Spit and the graveyard it has become.

Amanda Harvey from DoC instructs on how to right a calf. pic.twitter.com/DFX0DXW8l2