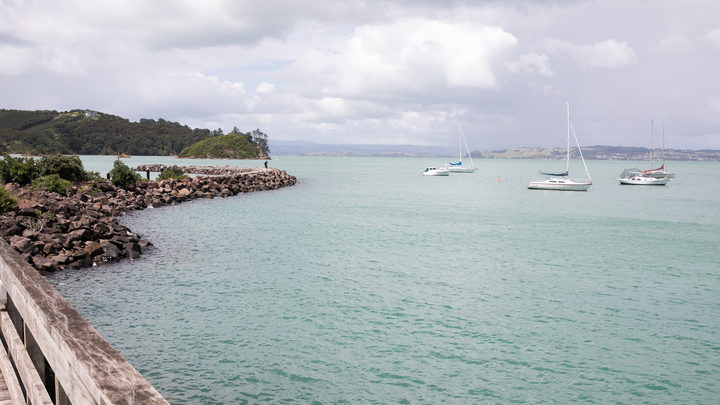 Developers and locals fighting over a planned marina on Waiheke Island are holding an urgent meeting today after a protest on the water forced work to stop on the project.

The Kennedy Point Marina has been described by one campaigner as an offensive, elitist edifice – but the developers say they have the legal consent to go ahead with it.

A group of protesters who have been camping on the beach have vowed to stay there until the marina plans are scrapped. They claimed a victory on Monday after a protesting kayaker blocked a barge that was scheduled to start work removing rocks in Putiki Bay.

Work has stopped for now but the company, Kennedy Point Boatharbour has won the legal battle so far.

Today, The Detail profiles the main players in the dispute, with the developer on one side and locals, iwi and environmentalists on the other. The saga is complicated further by the split in Ngāti Pāoa and the division among residents.

“It’s almost like a flashpoint of change on Waiheke Island,” says NZME‘s property editor Anne Gibson. “This has become a central argument where people are saying, ‘we don’t want this here’.

“There’s a perception on the island with all those amenities and facilities …. it’s not the sort of thing that people on the island want. That’s not why they go there, they actually go there to be in a different time from Auckland, they don’t want Auckland going there.”

Auckland Council granted Kennedy Point Marina resource consent in 2016. Since then, says Gibson, the developer has downsized the scale of the plan because of very strong local opposition.

The project, led by Tony Mair, who has developed 17 marinas in New Zealand and overseas, includes about 180 berths, a floating carpark, and onshore facilities and services such as sewage containment. The cheapest berth sells for $180,000 and Gibson says at least 150 have sold.

The residents’ group, Save Kennedy Point or SKP, has gone to the Environment Court, then the High Court and the Court of Appeal to try to get the consent overturned but has failed. In a last ditch legal bid it has appealed to the Supreme Court to overturn the High Court ruling and allow SKP to go back to the Environment Court to challenge the basis of the Auckland Council consent.

A decision is expected later this month but the developers have already started work, stating they have the resource consent to build.

“If they’ve sold 150 out of 186 berths then those berth holders are expecting to get the product that they have paid for,” Gibson says.

Putiki Bay is lined with pohutukawa trees, with dinghies lying on the sand. Calm blue water laps the beach, where a couple of tents sit, flying protest flags. Just metres away is an enormous barge with a crane, the Calliope.

Occupiers have been camped there for several weeks and say they’ll stay there until the barge leaves the bay.

Stuff reporter Josephine Franks says opponents are mainly concerned about the marina’s impact on the environment and the threat to the little blue penguin, the kororā, which nest in the bay.

Tony Mair in a promotional video says the marina will “incorporate a floating breakwater which results in no dredging or reclamation and there’s no interference with the intertidal zone”.

He goes on to say the developers will “continue to take guidance from the experts to create a predator control programme. This aims to protect the little blue penguins who call Kennedy Point home”.

But Franks says residents are sceptical.

“People look at reports from council about the state of the Hauraki Gulf or they look at the rahui that’s been placed around the foreshore to protect kaimoana and they are not convinced when the developers say it will be ok and we’ve got all these measures in place to ensure that the environmental impacts won’t affect the water quality.

“They’re saying, I just don’t know how you’re going to put a marina in there and it’s not going to make it worse.”

The battleground in paradise over a Waiheke marina
0:00 / 22:23
Radio New Zealand