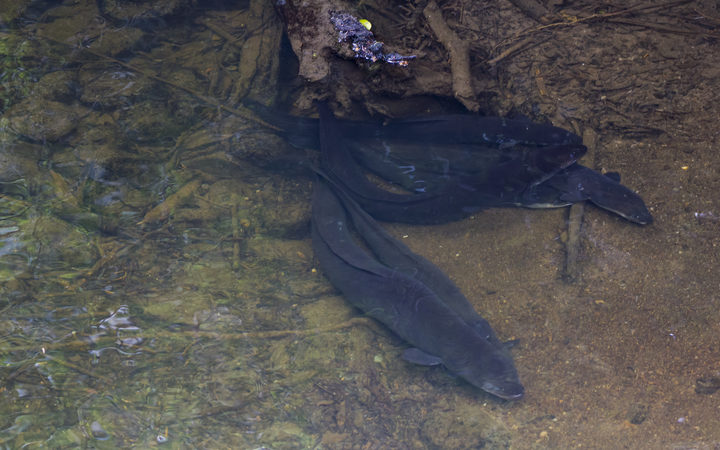 Eels in two Taranaki streams are expected to be contaminated with firefighting foam chemicals for many years.

The chemicals, from the PFAS family called the “forever compounds”, are on an international register of highly persistent pollutants and can impact human health.

Signs have been up warning against eating eels or fish from the Oaonui or Ngapirau streams since the pollution by multinational companies was revealed by RNZ last year.

The Taranaki District Health Board said impacts were uncertain.

“At this stage only a limited number of eels have been tested, some of the PFOS levels were very high, and the long term effects on human health are uncertain,” it told RNZ.

“The consensus was that the rahui (and the signs) should continue until more information is available.

“It is likely that the eels in the stream will remain contaminated for many years.”

PFOS is one of two PFASs that have been studied the most (the other is PFOA), with less known about the other 2000-3000 types of manmade PFASs.

It organised a teleconference with local iwi earlier this year but local people had expressed few if any health concerns to it, the board said.

Its Public Health Unit was not responsible for monitoring the streams or testing the eels, it said.

Oil giant Shell was storing PFOS foam in Taranaki for 12 years after it was banned in New Zealand, and other pollution came from the multinational Wood Group, which runs the firefighting training site next to Maui plant by the streams.