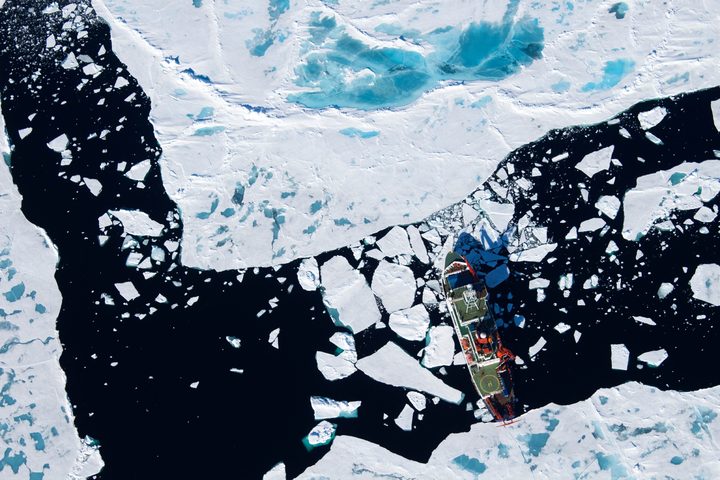 The study, carried out by the Alfred Wegener Institute in Germany, tested ice cores taken at five different locations in the Transpolar Drift, a major Arctic Ocean sea current, during spring in 2014 and summer in 2015.

The samples contained up to 12,000 microplastic particles – plastic smaller than 5mm – per litre of sea ice.

Study author Ilka Peeken said some of the microplastics were only 11 micrometers across – roughly one-sixth the diameter of a human hair.

“More than half of the microplastic particles trapped in the ice were less than a twentieth of a millimetre wide, which means they could easily be ingested by arctic micro-organisms.

“No one can say for certain how harmful these tiny plastic particles are for marine life, or ultimately also for human beings,” Dr Peeken said.

The samples contained traces of 17 different types of plastic, at concentrations two to three times found in a similar study in 2014.

Around half of the microplastics were made up of packaging materials such as polyethylene and polypropylene, as well as paints, nylon, polyester, and cellulose acetate – which is mainly used in cigarette filters.

Some of the plastics were likely to have come from the so-called ‘Great Pacific Garbage Patch’ and had been transported by ocean currents, the study said.

Others, including paint particles and nylon waste, were likely the result of expanding shipping and fishing industries in the Arctic.

The study said microplastics were a growing environmental hazard, with plastics accounting for 73 percent of all marine debris.

It said about 8 million tonnes of plastic moved from the land to the sea every year, but only about 1 percent of small plastic debris has been accounted for, meaning major ocean plastic stores had yet to be identified.