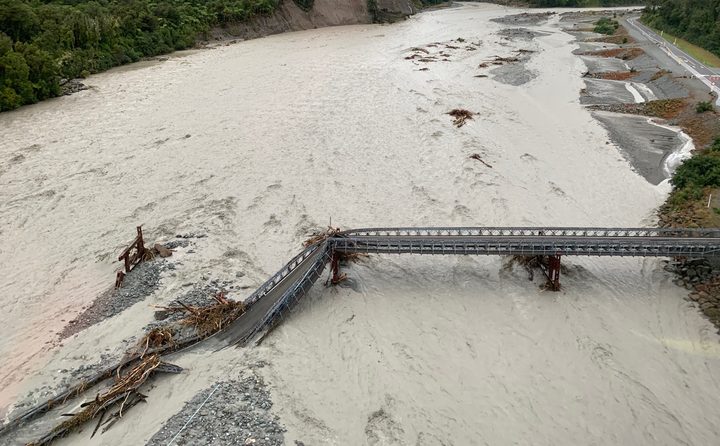 The West Coast Regional Council is considering removing the Waiho River’s stopbanks at Franz Josef and letting it revert to its old flood plain, potentially swallowing up thousands of hectares of farmland.

But the Westland District Council and locals are vehemently opposed to the idea, unless central government is prepared to stump up millions in compensation.

Tim Davies of the University of Canterbury has been carrying out investigations and research on the Waiho River since the early 1990s.

He described the Waiho River as dynamic and unpredictable, with cross currents that can cause very deep erosion of the bed and cause the banks to collapse into it.

Sediment also builds up and elevates the river bed overtime, known as aggradation.

Professor Davies said this had become worse since the stopbanks were first put in in the 1980s because the engineering work constrained the river, the sediment builds up in a smaller area and causes the bed to rise more rapidly.

The stopbanks and the State Highway 6 bridge, which washed away last week, have had to be raised several times, Prof Davies said.

“Although the stopbanks are maintaining the flood protection at the moment, the river is still aggrading, and probably reached the stage where serious questions need to be asked as to whether this flood risk management strategy is sustainable into the future,” he said.

The West Coast Regional Council has commissioned Prof Davies to carry out two reports on the river.

He advised them two years ago that, in his opinion, the only viable long-term strategy for managing flood risk on the Waiho is to allow the river to occupy the whole of its original floodplain, which would reduce the bed level at the State Highway 6 bridge.

A month ago the West Coast Regional Council issued a council memo discussing this option.

It said taking out the stopbanks is necessary in the long-term, otherwise, without intervention, it is likely a stopbank will fail or the Waiho River could carve a new channel to Docherty’s Creek or the Tatare River.

This option would mean the south side of Franz Josef could be flooded.

Locals met with staff from the regional council and the Transport Agency to discuss the options yesterday and the Westland District mayor, Bruce Smith, is deeply unhappy.

“This is not a small thing, and if I was to turn around and say well look let’s abandon say Okarito or Bruce Bay, god there’d be a hell of a cry.”

Mr Smith said the West Coast Regional Council are good at doing nothing and there’s a real unease from the locals that that will continue.

He said the Milton stopbank was washed away last week, “what we’re saying is we’ll get the ‘dozer in the river and replace it, let’s put it back in place and at least then the residents can sleep at night.”

Mr Smith said the rough government valuation of the land is $35 million, and that if central government wanted to stump that up to bail out the landowners, they would consider it.

The West Coast Regional Council did not return RNZ’s calls, but in its memo it said it did not have the resources to take such a radical step in managing natural hazards, and it required the support of central government and other agencies.