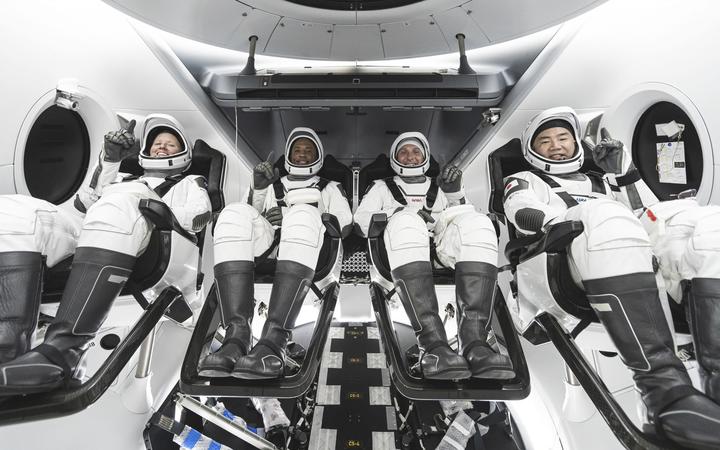 The private rocket company SpaceX has launched four astronauts to the International Space Station in a capsule built by the company.

It is only the second time that the Dragon, and its Falcon rocket, have been used to send people to orbit.

It follows a successful demo flight conducted in May, which marked the resumption of astronaut missions from US soil after a gap of nine years.

Takeoff from from Kennedy Space Center in Florida in Florida had to be exactly on schedule at 7.27pm local time in order to to catch the International Space Station as it circles the Earth overhead.

Winds on the Space Coast have already forced one 24-hour delay and should there be a further postponement for any reason, the next attempt would be made on Wednesday.

They have named their Dragon ship “Resilience”.

LIVE NOW: We are ready to #LaunchAmerica. Are you? 🚀

The group will spend roughly six months on the station, raising its complement to seven.

Nasa’s Kate Rubins and the Russian space agency (Roscosmos) cosmonauts Sergey Ryzhikov and Sergey Kud-Sverchkov are already aboard the 410km-high platform. Having a seven-strong team on the ISS will triple the amount of microgravity science that can be conducted on the platform.

Victor Glover will become the first African-American astronaut to undertake a long-duration mission on the station. In the 20 years that humans have permanently occupied the orbiting facility, black astronauts have only ever visited for short periods.

Nasa says this launch signifies that it has moved fully into the new era in which it purchases crew transport services from private contractors, rather than owning and operating its own vehicles, as was the case with the now retired space shuttles.

SpaceX is in charge on launch day, albeit with Nasa looking over its shoulder. It is the company’s people that are running the show from Kennedy’s “firing room” and from the SpaceX in-flight operations centre in Hawthorne, California.

It’s also SpaceX staff that are conducting the close-out activities at the pad, strapping the Nasa crew into the Dragon’s seats and closing the hatch.

SpaceX has signed contracts with Nasa valued in excess of $3bn to develop, test and fly an astronaut taxi service. As part of this relationship, the company ran a demonstration mission in May in which astronauts Doug Hurley and Bob Behnken were taken to the station and then returned safely to Earth.

The contracted arrangements also call for six “operational”, or routine, missions – this flight being the first.

Nasa has a similar deal with the Boeing aerospace company, although its service is a good year behind SpaceX.

The agency says its new model of contracting out transportation to low-Earth orbit has saved it billions of dollars in procurement costs. It intends to use these economies to fund its Moon and Mars ambitions.