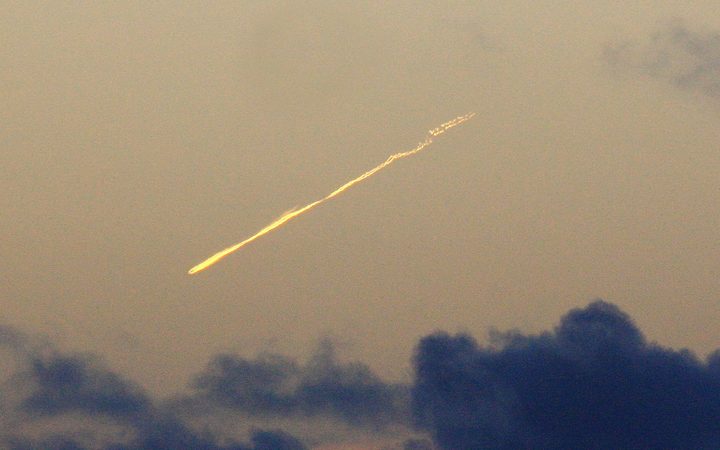 The estimated window of re-entry for the defunct Chinese space lab Tiangong-1 has narrowed sharply.

The timeframe for the fall to Earth is centred on 01:07 Monday GMT (1.07pm New Zealand time), plus or minus two hours.

Experts are tracking the module as it orbits at an ever decreasing altitude.

However, they will only be sure of the timing of the final plunge very late in the descent because of the uncertainties over Tiangong’s interactions with the high atmosphere.

China has lost communication with the module and there is no way to control its downward flight.

However, the risk of any parts of Tiangong hitting a populated area is considered very low.

“Given Tiangong-1 has a larger mass and is more robust, as it is pressurised, than many other space objects that return uncontrolled to Earth from space, it is the subject of a number of radar tracking campaigns,” said Richard Crowther, the UK Space Agency’s chief engineer.

“The majority of the module can be expected to burn up during re-entry heating, with the greatest probability being that any surviving fragments will fall into the sea,” he told BBC News.

Where will Tiangong-1 fall?

Launched in 2011 and visited by six Chinese astronauts, the 10m-long, 8.5-tonne Tiangong module should really have been de-orbited in a planned manner.

Traditionally, thrusters are fired on large vehicles to drive them towards a remote zone over the Southern Ocean. But this option appears not to be available, especially after the loss of command links in 2016.

Tiangong is now brushing through the top of the atmosphere, which is dragging on the spacecraft and causing it to lose altitude rapidly.

Thirteen space agencies, under the leadership of the European Space Agency, have been using radar and optical observations to follow its path around the globe, modelling its behaviour.

This collective, known as the Inter-Agency Space Debris Coordination Committee (IADC), has issued regular updates on the decent progress, and Esa itself gave its own final bulletin on Sunday. This forecast was for a four-hour re-entry window centred on 01:07 GMT Monday.

“A confidence of one hour is only reached about four hours beforehand. And one hour still means almost one revolution around the Earth,” said Holger Krag, the head of Esa’s space debris office. “But that’s still good enough to exclude many countries and even some continents.”

What can be said with certainty is that nothing will fall outside of 43 degrees from the equator, north or south.

This encompasses a region up to the Mediterranean and down to Tasmania, for example. It is governed by the inclination on which Tiangong was launched.

China has limited national tracking facilities around the globe and so had no choice but to keep the vessel on a reasonably tight equatorial path.

Although about 5.2 billion people live within the re-entry zone, most of it is ocean, which explains the high probability that any debris that survives to the surface will hit water.

“We know from similar events that on average between 20 percent and 40 percent of the initial mass has the chance to survive re-entry heating,” Dr Krag said.

“We could apply this rule of thumb also to Tiangong, I believe, because typically the same amount of heat-resistant material in relative terms is onboard all spacecraft.

“So that would mean between 1.5 tonnes and 3.5 tonnes might be able to survive,” he said.

The components that most often seem to avoid burning up in the atmosphere are tanks. These objects are interior to the spacecraft and so are protected for much of the descent.

But they are also made from steel, titanium or carbon-reinforced plastics and these materials are generally more resistant to high temperatures should they become exposed.

Tiangong is certainly on the large size for uncontrolled re-entry objects but it is far from being the biggest, historically.

The US space agency’s Skylab was almost 80 tonnes in mass when it came back partially uncontrolled in 1979. Parts struck Western Australia but no-one on the ground was injured.

Nasa’s Columbia shuttle would also have to be classed as an uncontrolled re-entry. Its mass was over 100 tonnes when it made its tragic return from orbit in 2003.

Again, no-one on the ground was hit as debris scattered through the US states of Texas and Louisiana.

Jonathan McDowell from the Harvard-Smithsonian Center for Astrophysics, reckons Tiangong is only the 50th most massive object to come back uncontrolled.

China is participating in the IADC campaign and is sharing some of its data.

The nation has since launched a second lab, Tiangong-2, which continues to be operational. It was visited by a re-fuelling freighter, Tianzhou-1, just last year.

The Tiangongs were put up to demonstrate orbital rendezvous and docking capabilities – to be testbeds to rehearse activities ahead of China’s more permanent space station.

This facility, which is expected to comprise a large core module and two smaller ancillary modules, will be in service early next decade, the Asian nation says.

A new rocket, the Long March 5, was recently introduced to perform the heavy lifting that will be required to get the core module in orbit.