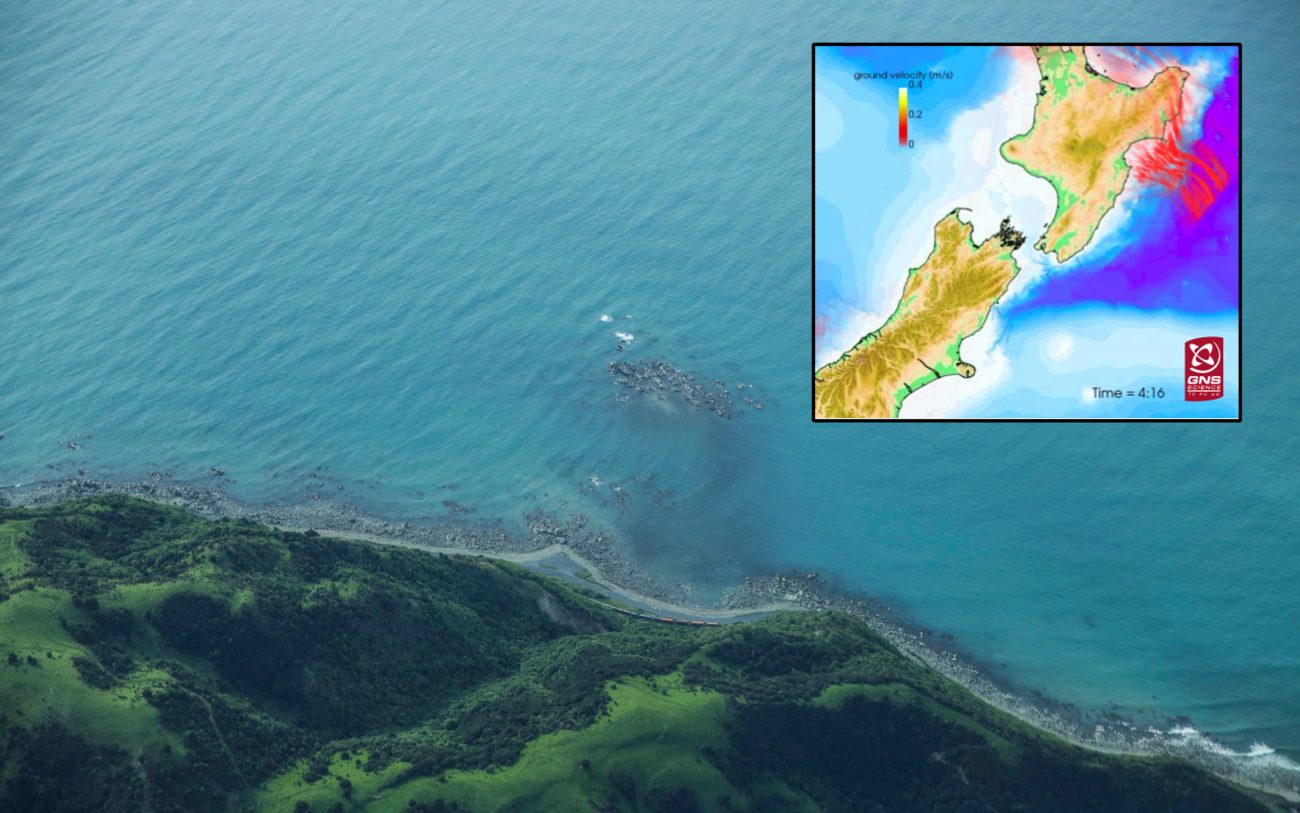 New research shows November’s 7.8 magnitude Kaikōura earthquake sparked a series of unprecedented ‘slow slip events’ off the east coast of the North Island, up to 600km away.

Here is how this recently discovered phenomenon works and why it matters.

How is a slow slip different to a normal earthquake?

Slow slip events (also known as ‘slow earthquakes’) are similar to earthquakes that we feel, but are quite different at the same time.

They are similar because they involve more rapid than normal movement between two pieces of the Earth’s crust along a fault.

But, unlike regular earthquakes, where the movement occurs in seconds, movement during slow slip events can take weeks to months to occur. The release of energy and ground movement is incredibly slow so we don’t feel them at the surface like we do during earthquakes – but GPS-enabled instruments that monitor tiny, millimetre-level changes in ground movement do.

Where do they happen?

In the middle, the two plates move past each other laterally, and we have the Alpine Fault.

How do they happen?

Where the two plates meet at depth beneath the Earth is where it gets interesting. In some places, the plates move freely past each other, but in other places, the plates can become locked together due to friction on the fault between them. This builds up tension, and when it’s released the movement can be fast (causing an earthquake) or slow (like what happens during a slow slip event).

Slow slips are common at the Hikurangi subduction zone. In fact, they were first observed there – under the seafloor just east of Gisborne – back in 2002. Since then, New Zealand scientists have observed dozens of these events on the plate boundary beneath the North Island.

Should we be worried?

For the most part, slow slip events help to relieve built-up tectonic stress, instead of this stress being relieved by large earthquakes. So, they are a good thing – we should be very happy that they happen! However, when a slow slip occurs, it can redistribute that stress to other parts of the plate boundary. In New Zealand, we often see swarms of small earthquakes during slow slips, which is part of that process of redistributing the tectonic stress.

It is possible that some slow slips could trigger larger earthquakes, but that is probably extremely rare indeed. Scientists are currently trying to better understand the relationships between slow slips and earthquakes so that in the future we may be able to use them to improve earthquake forecasting.

How did the Kaikōura quake trigger the North Island east coast slow slip?

The Kaikōura earthquake triggered a large slow slip event along much of the Hikurangi subduction zone (which is more than 600km away from the earthquake epicentre).

As the seismic energy from the quake moved north, it temporarily added more stress to the subduction zone, triggering the event. The illustration at the top of this page shows the passing seismic waves – in red lines – at the plate boundary east of the North Island.

The event has been described – by GNS Science’s Laura Wallace – as the “largest and most widespread episode of slow slip observed in New Zealand … this is probably the clearest example documented worldwide of long distance, large-scale slow slip triggering”.

It was detected by GeoNet’s continuously operating GPS network. It occurred less than 15km deep below the surface (or seabed) and spanned more than 15,000 sq km offshore from the Hawke’s Bay and Gisborne regions, and took just two to three weeks to occur.

Slow slip movement was also triggered beneath the Kāpiti Coast region – at deeper levels, about 30-50km beneath the Earth’s surface, on the boundary between the Pacific and Australian Plates. Slippage of up to 0.5m was also observed beneath the Marlborough region.

The slip occurring between Kāpiti and Marlborough is still going on today, but has slowed significantly and is now happening at a rate of about 1cm a month.

What’s new about this week’s research?

New research into the Hawke’s Bay and Gisborne slow slip event suggests the shallow part (less than 15km deep) of subduction plate boundaries may be more susceptible to the triggering of slow slips by passing seismic waves from distant earthquakes.

This is because of the sedimentary wedge that typically overlies the shallow part of most boundaries. This wedge traps and amplifies seismic waves. This can cause large changes in stress on the boundary fault, which are capable of triggering slow slips.

The study published this week in Nature Geoscience took advantage of the entire range of data provided by GeoNet. It features new models of seismic wave movement as well as using GPS to detect slow slips.

The researchers used GeoNet’s strong motion seismic data from around the whole country and compared this with computer-generated seismograms, which were created using the New Zealand supercomputer known as NeSI.

We are now closer to understanding more about the relationship between earthquakes and slow slips.

The scientists are currently working on research papers to explain the deeper Kāpiti and Marlborough events that followed the Kaikōura earthquake.

Source: Adapted from this blog post on GeoNet’s website with help from GNS Science geophysicist Laura Wallace, who co-authored the recent research with GNS Science seismologist Yoshihira Kaneko and others.