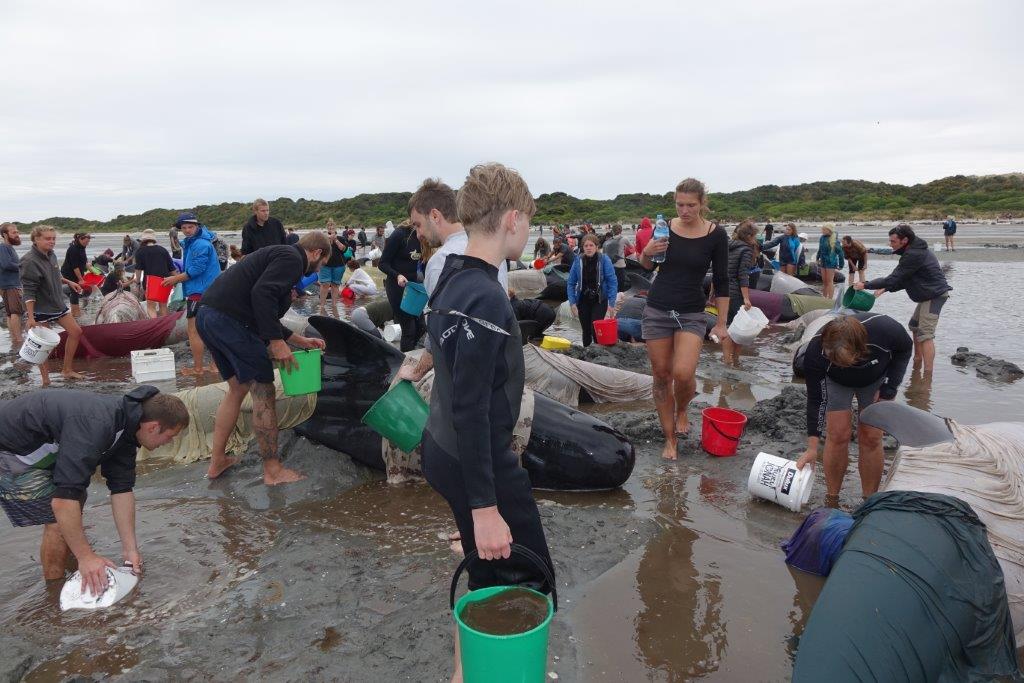 A Golden Bay woman says saving stranded whales is not glamorous and it has to be tackled with a practical approach.

Rebecca Hayter, who grew up in Golden Bay and recently returned, has been at Farewell Spit helping at what is her first rescue.

More than 500 volunteers have been helping with what is the largest-ever recorded mainland whale stranding in New Zealand – 400 pilot whales came ashore overnight on Thursday, with 300 dying in the first day.

“From my house I can see the site of where it is, but it’s about a 40-minute drive out there,” said Ms Hayter.

She said while she had never before attended a stranding it was something she had always wanted to do.

“Partly because of the experience of getting up close with the whales because they really fascinate me, and obviously just to be able to help.

“But it’s not as glamorous as I thought it might be, I have to say.”

“You get out there and there’s a bit of waiting around, and you’re freezing cold.

“I hadn’t realised there’s quite some physical risk – you’re in the water with a lot of faeces and urine. The Project Jonah people warn you when they blow through their blowhole to stay away from that because there might be bacteria in it … I just hadn’t thought of that aspect of it.”

Ms Hayter said it also required emotional resilience, which she prepared herself for.

“On the drive out there I realised there were going to be a lot of dead whales and obviously, and some dying and some quite traumatised and I thought, ‘oh gosh, that’s going to be quite hard’, and then I just said to myself that that’s actually quite self-indulgent and if I was going to start being brought down by that, then I wouldn’t be much use.”

Ms Hayter said it had to be approached as a job to be done.

“You’re more help that way, than getting upset about it. If you think like that you’re not helping the whales.”

She concedes though it was harder for those dealing with the young whales and the calves, as she was mainly helping adult whales.

She praised Project Jonah personnel for the support and advice given to volunteers.